Earth Defense Force has been my go-to game for exterminating giant insects ever since 2017. Man, that was a good time, wasn’t it? Sure it was rough around the edges (very rough), but it was so much brainless fun. Insect Armageddon was a bit more polarizing for some reason I can’t quite figure out since I had a good amount of fun with it, but I guess you can’t please everybody. The funny thing is, that seems to be exactly what Earth Defense Force 2025 is trying to do: please everybody. It’s full of the rough quirkiness found in the earlier game, but contains a similar class system to what was found in the later title – plus a few welcome refinements. It’s a fantastic combination. For a while.

Remember how The Ravagers’ mothership was destroyed and the alien menace was sent packing for good? Well it turns out they never left. For years they’ve been hanging out on the moon; regrouping and biding their time. Now they’re on the move again, and it’s up to the EDF to stop them. Again. It’s not terribly original, but this is Earth Defense Force we’re talking about. You’d expect nothing less than utter B-grade camp, right? And goodness me does it deliver on the camp! It’s possible that the cheesy radio chatter and dialog is even worse (read: better) than it was in 2017. Actually I’m pretty sure it is worse. Between the completely ridiculous lines (“I’m caught in the threeeeeeeaaaaaaaad!”) and the really terrible (which is, of course, intentional) acting you could probably use all the cheese to easily create your own fondue fountain. And I wouldn’t have it any other way. 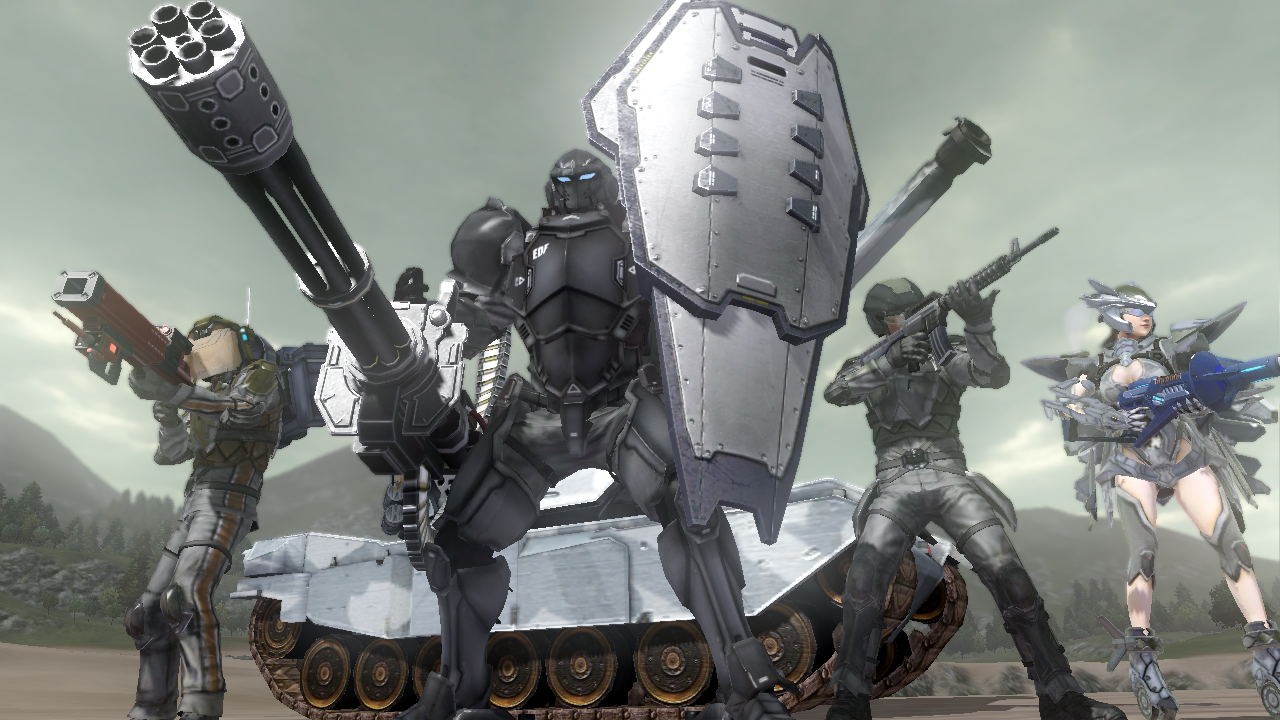 Much of the core EDF experience we’ve all come to expect is present, and even refined, here. You’ll be blowing up bugs and giant robots left-and-right, gathering armor kits to permanently boost your soldier’s health, finding random weapon drops, and fighting through a lot of missions (80+) across a lot of different difficulties (Easy, Normal, Hard, Hardest, Inferno). Only this time around there are new enemies to deal with, improved physics (vital for loot drops more than anything), and a better representation of devastation across the board. Granted the series has never and probably will never be lauded for its graphical achievements, but building collapses look pretty darned good from a distance and watching limbs and other body parts fly off of giant insects and robots is incredibly satisfying. It’s just a shame that many of 2017’s issues are still present.

Now I loved that game quite a bit, but we all know it had some problems. And 2025 doesn’t seem to have done much about them. I could care less about the occasional framerate chugs, but the piles and piles of bodies that get in the way constantly when I’m moving or shooting? The tendency ants have to walk over me just as I’m firing a rocket? Having body parts flung back at me as I’m firing a rocket? Getting caught in a mass of and never having a chance to do anything because they keep grabbing me and shaking me as soon as I hit the ground? All that crap gets really, really annoying. It doesn’t help that the difficulty ramps up significantly at several points with no warning (regardless of the chosen setting), which often leads to trial-and-error attempts while you try to figure out what weapons are the “right” ones to bring along. And it helps even less when some of the levels are so poorly thought out. For the most part they’re quick, fun, and can yield quite a bit of loot. However there are certain missions that are just horrible and shouldn’t exist. A particular one that comes to mind is infiltrating an insect hive and going after the queen. I wouldn’t mind it so much if I didn’t have to spend 20 minutes to a half hour fighting my way through giant ants and spiders (and wandering through empty areas that have no real purpose, can’t forget those!) only to die while fighting the queen because of that obnoxious corpse physics/rocket combo I’ve already mentioned. Even then I probably wouldn’t have been so mad about it if I had some way to continue, but instead it was either start over from the beginning or go back to the mission screen. Nope. 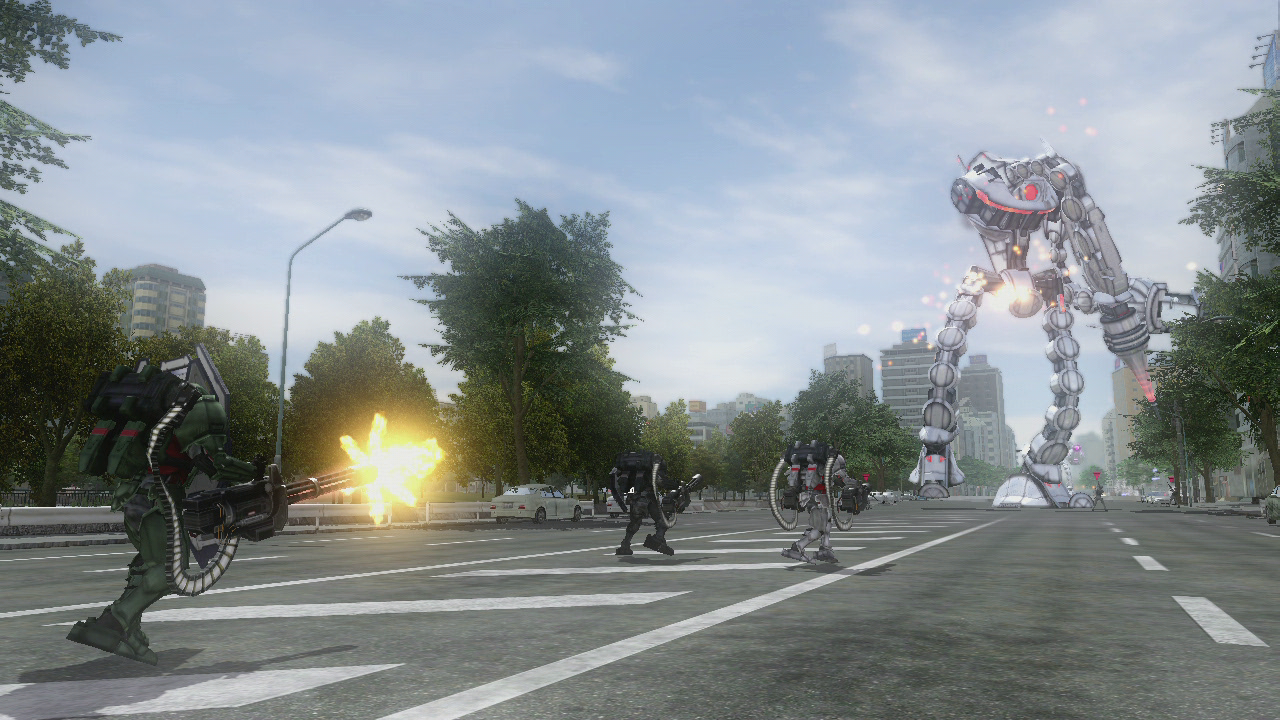 Of course the biggest change would have to be the refined class system. In addition to the typical EDF soldier, you’ll also be able to play as three specialized classes who each posses their own unique abilities and weapons. It’s similar to what was present in Insect Armageddon, but it feels a lot more balanced this time around. The Ranger is the regular grunt-type soldier who, while he doesn’t specialize in any one thing, possesses a good combination of maneuverability and firepower. The Air Raider, on the other hand, isn’t all that great in a straight-up fight. His strength lies in his ability to support others by calling in vehicle drops and artillery strikes. The Fencer is an incredibly slow and rather awkward human tank that can be tricky to control, but he can carry a total of four weapons (as opposed to the standard two everyone else has) and wield one in each hand. Finally there’s the Wing Diver. I’m not too crazy about the cyborg cheerleader look, nor the unnecessary cleavage window in what I assume is supposed to be armor (I mean come on, really?), but she’s a quite the interesting soldier. She’s the fastest and most mobile class in the game, but also the most frail. She can fly circles around enemies and easily access rooftops for long-ranged fighting; however her energy pool is limited so you’ll need to land every so often to give her a chance to recharge. Each of these classes can be a lot of fun to play in their own right. 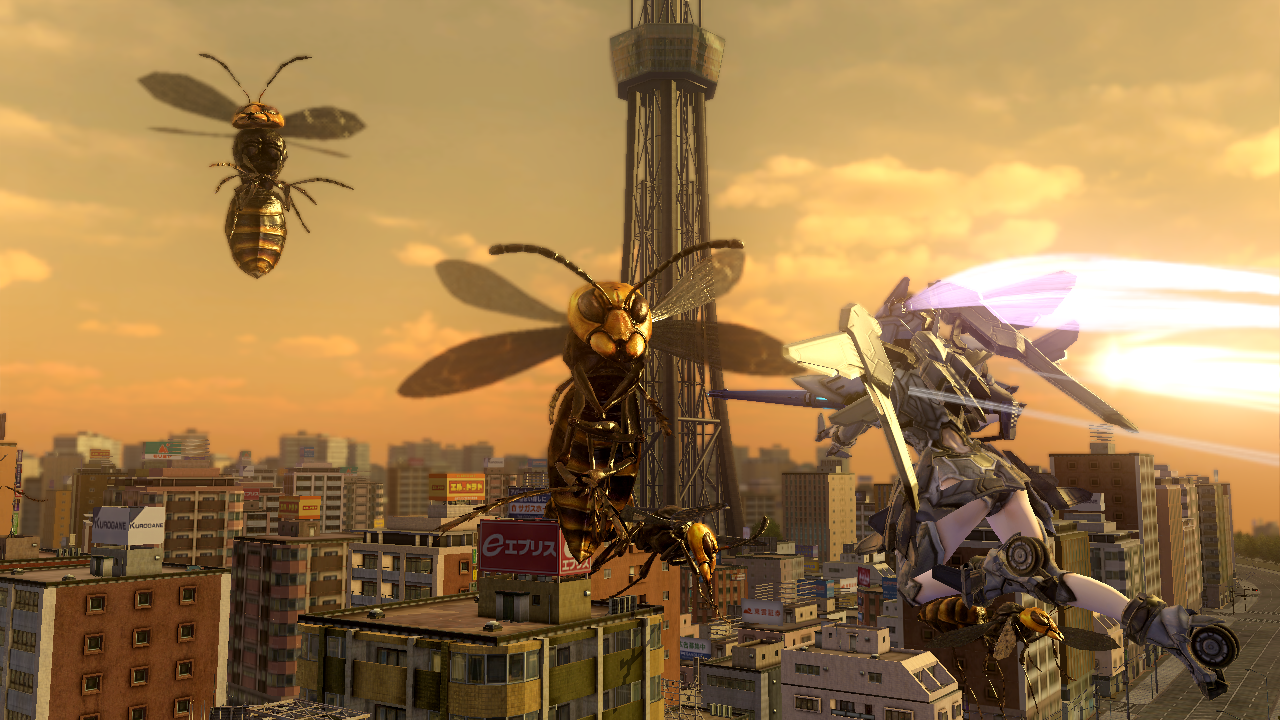 All the different classes are remarkably well-balanced with the exception of the Air Raider. That’s not so say he’s too weak or too strong, but he’s generally not a good choice for solo play since most of his abilities hinge on support. But in a two player split-screen game or online missions with up to four players he can be a vital asset as he summons tanks, places healing devices, decimates several city blocks with a well-timed air strike, and so on. It’s unfortunate then that the online portion of Earth Defense Force 2025 is so wonky. I mean it works, don’t get me wrong, and can be great when playing with friends (it even supports split-screen online play!), but trying to play with random people can be something of a headache. First I was told that my profile name was inappropriate to use online (“RobsteinOne” is inappropriate? Really now?). Once i changed it and managed to get online I had trouble joining a game because there’s no drop-in support; which meant I had to wait in a lobby until everyone else completed or failed the current mission. Then once I finally managed to get a game going it froze on me after about a minute. A restart and another attempt later and I was finally playing online, and then encountered several annoying (but not game-ruining) latency issues that sometimes had soldiers popping in and out around the map and usually resulted in either my teammates hitting me with a rocket or me hitting them with one. Oh, and for whatever reason online and offline campaign progress are kept separate. So no matter how far you might be in your offline game you’ll be forced to start on the first mission the first time you try to set up your own online game. 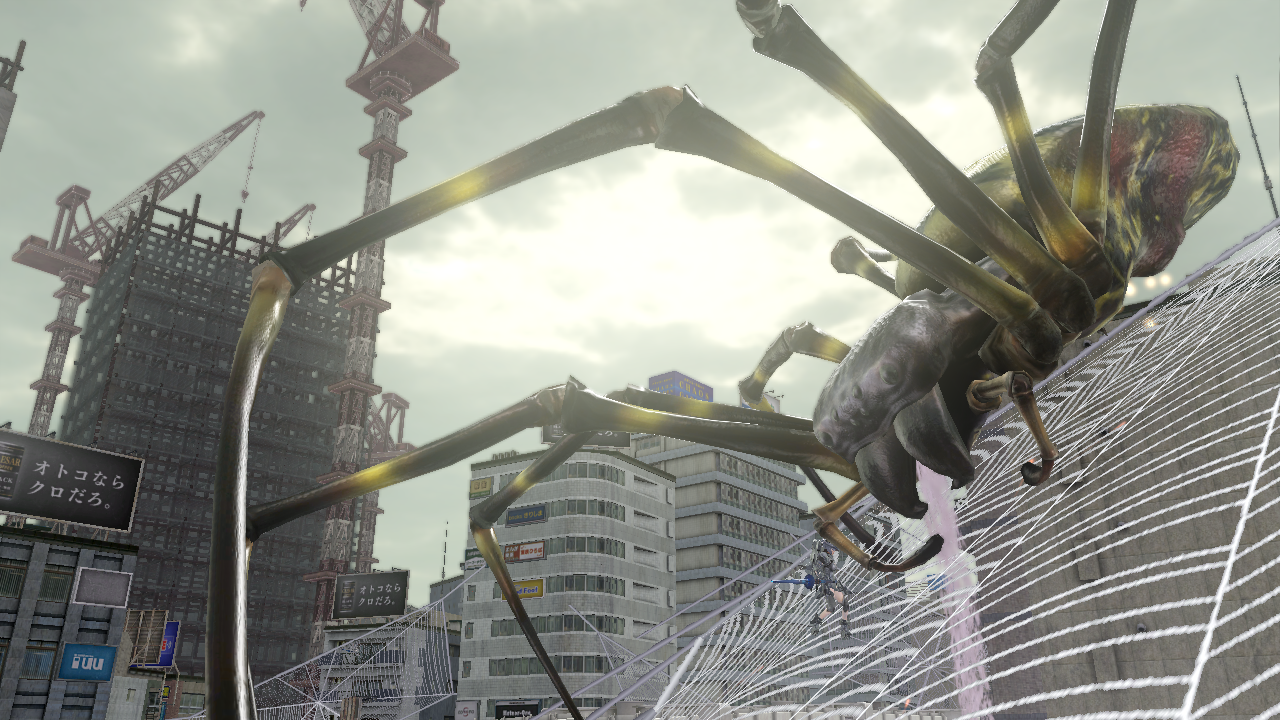 I’m sort of at odds with myself on where I stand with Earth Defense Force 2025. It can be a lot of brainless fun just like 2017 and the class system is the best in the series (at least out of the games we’ve seen in the US), but it also suffers from the many of the same highly aggravating issues that most of us tend to forget about when we think back on it. In many ways it’s the best game in the series on this side of the Pacific, but it doesn’t fix everything. Die-hard fans of the earlier games should absolutely check it out, but if you’ve had trouble looking past their flaws before, 2025 won’t make it any easier.