The very first time I stumbled into a fight with a homeless guy who, apropos of nothing at the time, was speaking in Adolf Hitler samples, it cemented what I already knew about South Park: The Stick of Truth; this was going to be one for a very specific audience.

Two stock phrases: “fans of the genre” and “fans of the license.” This pair of tired old chestnuts are often trotted out during reviews as a lazy man’s way of saying that while Joe Average may find a particular product quite mediocre, rabid devotees will probably forgive its glaring flaws when viewed through the lenses of their fanboy goggles. Now while it may sound like I’m leading with this as a way of softening the blow that Stick of Truth is only average at best, I’m actually doing so for a totally different reason. Stick with me here.

In the years since its 1997 debut, South Park has metamorphosed from a crude (for its time), but relatively nonthreatening animated comedy about the surreal adventures of four kids in a quiet little mountain town into a scathing satire of current events where no topic, no matter how seemingly taboo, is off-limits. As the show shed the relative innocence of its early days, the material grew increasingly transgressive and socially aware, doubtlessly alienating a portion of its former audience in the process. Foul-mouthed children, abundant scatological humor, nudity and graphic sexual activity, racially and culturally insensitive stereotypes; jokes about religion, abortion and pedophilia (just to name a few); it’s all par for the course here. This content is the divide that is most likely to determine if somebody is going to enjoy South Park: The Stick of Truth or not, because the mechanical side is, for the most part, pretty damn solid. 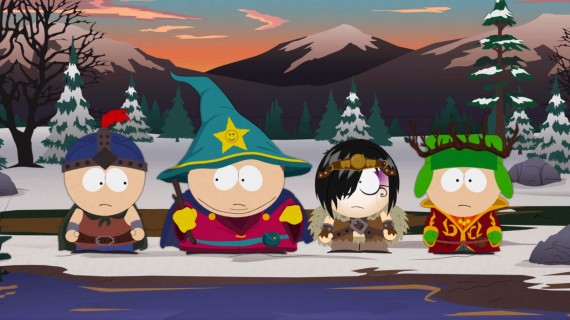 Instead of putting one of the familiar foursome of Stan, Kyle, Cartman and Kenny in the leading role, Stick of Truth casts the player as the nondescript New Kid in town. Players get to design his appearance from a fairly robust palate of options, while still keeping South Park’s trademark simplicity intact. This blank slate of a character also brings about the first instance of Stick of Truth’s lampooning of classic gaming tropes; in this case, the silent JRPG protagonist with a mysterious past and an epic destiny. The New Kid (dubbed “Douchebag” by Cartman) never speaks aloud and his companions take nearly every opportunity to lampshade this with uncomfortably pregnant pauses and sideways glances, waiting for the answers that they know are never coming. And despite the amusingly Bakshi/Rankin-Bass-esque intro sequence and early gameplay setting the scene for what seems to be a standard fantasy RPG, before long things go off the rails and players end up waist deep in a genre stew of aliens, zombies and more. But as fans of South Park can attest, these sorts of chaotic train wrecks are a near-weekly occurrence and more often than not, they just find a way to work.

The game mechanics are not nearly as confusing or complicated. After picking his class from Fighter, Mage, Thief or (the quite surprisingly inoffensive) Jew, the New Kid sets off with a traveling companion, who can be swapped out on the fly as more members are recruited. Combat is fairly standard turn-based RPG fare with a couple of real-time action RPG mechanics thrown in, like timed button pressed to inflict more damage or to block incoming attacks. Since the player’s party of two is quite often outnumbered in fights, the designers also decided to free up the annoyance of needing a dedicated heal-bot character by giving each kid two actions per turn. One of the two can only be used for consumables, which restore health, special ability power or fart-based mana (Chipotle burritos, anyone?). The other turn is used to make basic or special attacks. This was a smart move, as battles can (sometimes quite rapidly) turn deadly if the player isn’t properly prepared and since the PC party is so small, having them run double-duty as their own support team keeps things from getting too crowded on-screen. 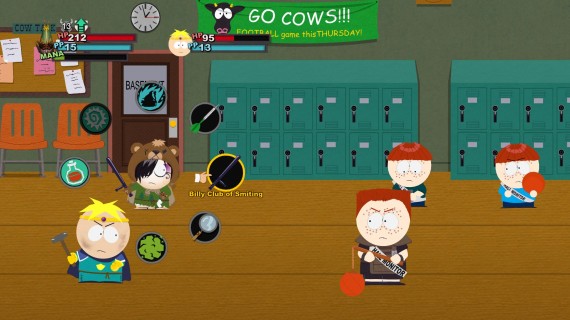 While the New Kid typically gains experience via combat, his abilities can be further tweaked by attaching modifier-adding stickers and patches into slots on his weapons and armor. He also earns a choice of perks after surpassing milestones of earning various numbers of Facebook friends. In fact, the whole system of backend menus is meant to represent his Facebook profile, complete with humorous feed updates (with replies, likes and all) from his newly acquired social network.

These sorts of things are where South Park: The Stick of Truth really shines. The game was scripted by Trey Parker and Matt Stone, as is blatantly obvious to anyone familiar with the show from the moment the game gets underway. The writing is tight and has the right balance of laugh-out-loud funny and cringe-inducingly gross. Boilerplate hyperbole like “it feels like you’re really inside the show!” may be weak and groan-worthy, but it’s also the only really appropriate way to describe the feeling of immersion in South Park’s universe that the game projects. Indeed, the crude simplicity of the show’s now-trademark construction paper design origins and jerky animation style is part of what serves the game’s ability to so accurately replicate this world. The insertion effect is near-seamless and fans will likely spend the first couple of hours grinning from ear to ear as they bounce along the town’s snowy streets, collecting loot that references close to two decades worth of episodes. 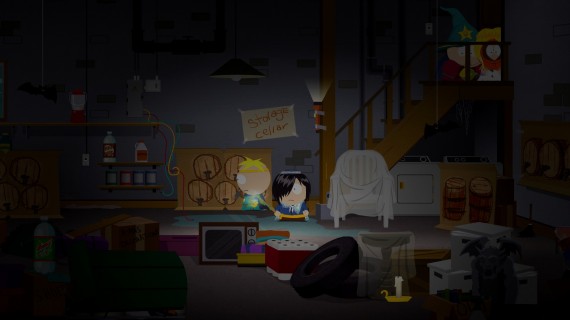 Of the few complaints I can manage to raise about this game, none of them are really deal breakers; more minor annoyances, really. In a number of cases, the criteria for finishing certain side quests were not clearly communicated. It wasn’t until I had advanced the main story to a certain degree that they became able to be fulfilled. And while my paranoid OCD of trying to finish side quests before plot advancement locks them out is mostly to blame for this, the game’s lack of clarity in this aspect of quest design did not help. This resulted in me canvassing South Park, house-by-house, street-by-street, searching for things that I was sure I had overlooked. A word of advice to the similarly minded: if something hasn’t been found pertaining to a side-quest, follow the main story a bit further and it will likely end up dropped into the New Kid’s lap. Learn from my mistakes.

There was also a particularly infuriating tutorial scene with Randy Marsh during the late second act that easily took me twenty tries to pass, each one preceded by an increasingly annoying, unskippable dialogue segment. There were a couple of minor technical (mostly audio) glitches and one instance of a scripted sequence hanging that forced me to reload. The game also just flat-out doesn’t explain some things, like why the New Kid’s health and power refresh between fights, but his mana will not refill without the use of items. Make sure to take the time to read the manual buried in the Help menu, as it touches on a few things that the tutorial poorly explains or glosses over. 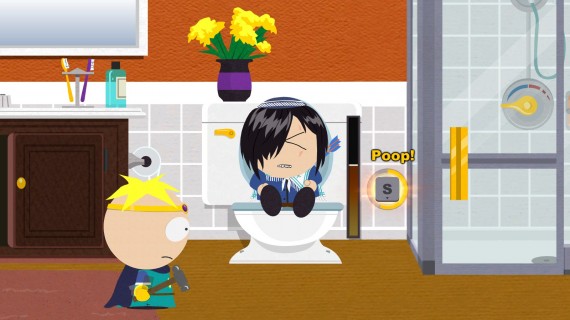 In the time I spent with South Park: The Stick of Truth (around 15 hours if skipping a fair chunk of the side quests, 18-20 for completists), I found myself equal parts amused, grossed-out and enthralled. As I stated before, some people are going to have a really hard time with this one, as it fully earns its ESRB rating (and then some). That goes double for anybody who ever walked in on their parents having sex and have no desire to relive the trauma by seeing it blown up to kaiju-scaled proportions. In the end, fans are still going to love this game and haters will still hate it based purely on nothing but the very fact that it actually exists. However, this should not detract at all from recognizing and appreciating the level of care and craft that went into an experience where the player can collect his own freshly made poop and fling it at a child dressed as an elf in order to apply a status effect that makes him take damage due to vomiting. I can’t believe I actually just typed that sentence. Then again, I never really actually believed I’d see a South Park game that was worthy of both the show’s quality and its controversial legacy.

In the immortal words of Stan Marsh, “you know, I learned something today.” And that lesson was that “licensed game” no longer has to be a dirty word. They can stand up there right alongside the best that the industry has to offer. If you need to learn some new dirty words to replace it, I know a few kids in a quiet little mountain town who can probably help you out.