The ash falls like black snow, building at the base of the buildings, quieting my steps. I can’t see them yet, but I can hear the guards talking, discussing their families. The sickness is spreading, The Gloom, it’s everywhere now. I creep around the boxes I’m behind and take a peek, I see them now. Fortunately there is a way around them; up. My bow barely makes a sound as the rope arrow finds its mark in the beam above me, time for a better view. I wait until their backs are turned before I start my ascent, in no time at all I’m three stories up on the roof. My boots are made to be silent, my clothing is about blending in with the night, if I hold still you can be standing right next to me and you’ll never see me. Just the way it should be, I didn’t get this reputation for being visible in my element; the night is my friend. I make my way North, a short jump across an alley to the next roof. My destination is only a few blocks more as I pass several more patrols. Sometimes there are single-man patrols, sometimes there are two. If they knew I was here, all hell would break loose. The Baron would love nothing better than to have me hanged in The City’s square. 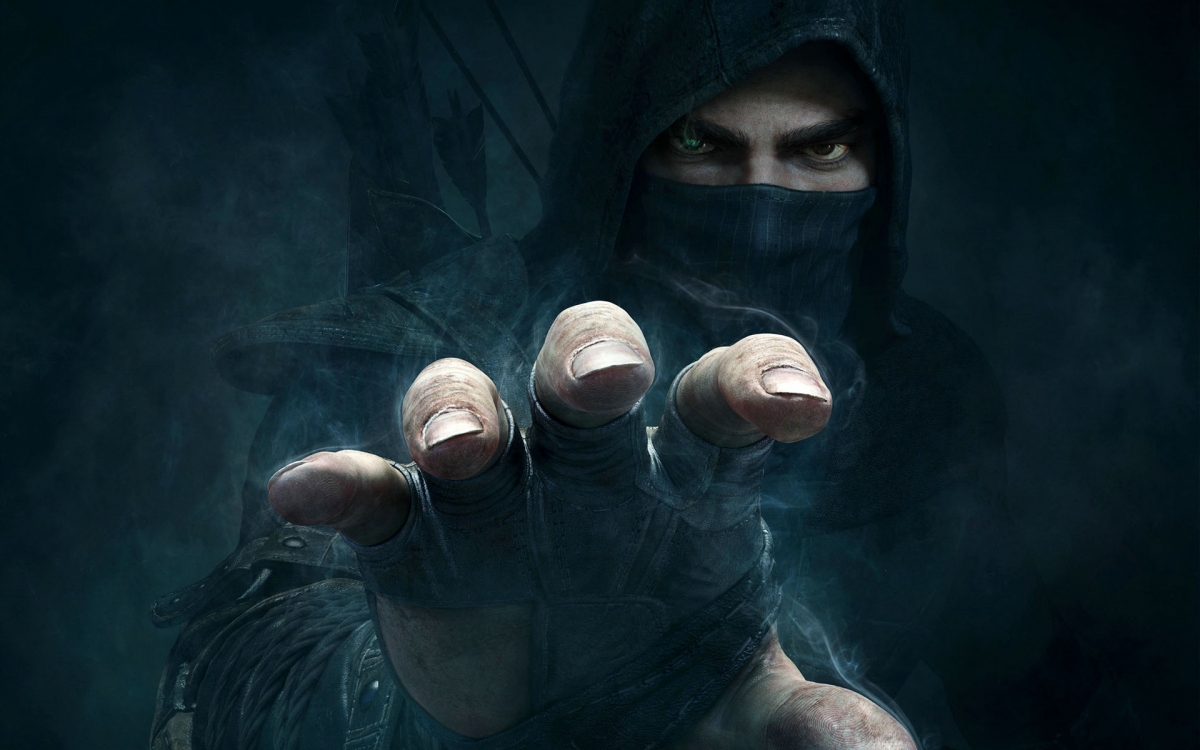 Not tonight though, silent as a mouse, barely a shadow I flit to the window. A crowbar is all it takes to open it and I’m in. I can hear snoring to my right, a quick peek around the corner lets me know that the guard is truly sleeping. Fool. A few steps and his coin purse is mine, thanks chum, I can always use the extra money. It’s like a shopping center in here, and everything is free – the best price. A silver cup, a candelabra, a few coins someone dropped; it’s all mine.

Uh-oh, I hear talking and footsteps. Thankfully the guards like to talk to themselves, it makes them easier to track. I peek around the corner, jackpot, it’s the main display area of the jewelry store with only one guard. I swoop in, just another shadow in the darkened room. There’s only one lamp at the far end of the room, it’s all the guard has to see, and it’s all I need to hide from him. I check to see where he is and what he’s looking at, a painting on the wall, perfect. I open the case, hiding behind and grabbing its contents, trinkets in my pocket; I close it again, of course. No use in letting someone know I’m here. He’s on the move and so am I. I keep him on the other side of the room from me as I sidle up to the next case. I would like to see their faces in the morning when they see it empty, but that’s just not my style. The cash register is just above my head as I make my way through the room, a quick trick with my lock picks and it’s empty. It takes no more than a few minutes to empty the room of anything valuable. My pack is getting heavy, time to go. Just one more thing to grab, the guard is carrying coins, and I like coins. My hand materializes from the shadow and it’s mine. I sure love my work. 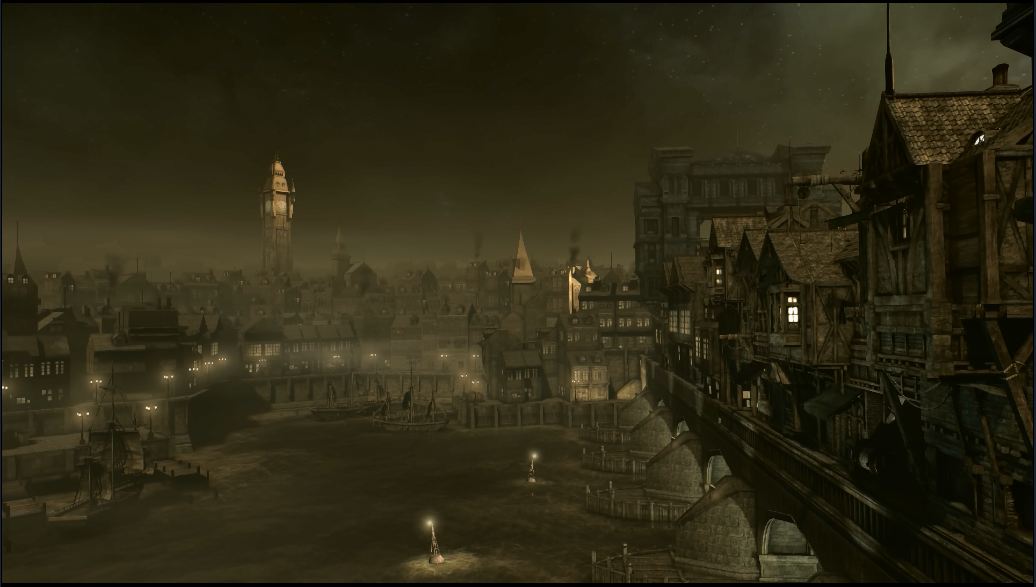 It’s a challenge playing Theif as I got far too used to play first-person shooters, even though Thief has been touted as a First-Person Looter, which is pretty accurate. Sneaking around is not as easy as players might think and if they don’t have a good set of headphones for this one, they’ll miss something important; or someone important.

Thief’s intro brings players the story so far as they take the role of Garrett, a Master Thief. Players return to a city, a sprawling Steampunk dystopia where sickness runs rampant. The privileged live like kings and the poor are treated no better than slaves. Why Garrett has been absent isn’t clear yet, but he runs into his old apprentice who seems quite angry with him for it.
Players begin to learn the controls as they chase her, Erin, through the darkened streets, heading from one destination to another and learning more about what’s going on. Up walls, over roofs, and down alleys while staying in the shadows. Always one step behind, but that’s okay because the point of this little adventure is to get players used to the controls and what they can and can’t climb. Anything steal-able is a bright beacon in the night, like a strobe light at the airport, and just as hard to miss.

After about five minutes I realize that this is a very basic set of controls, it’s not built around a keyboard and mouse at all; it’s built for a console controller and I feel hampered. It’s blatantly too simplistic and frustrating, the space bar does far too many things for my taste and the only action key players have is ‘E’. Some games are better with a controller, but those are usually a fighting game, not an adventure title. One good example is I’m following the story and it leads me to this factory, I’m no more than five feet from two guards and I need to climb up a wall. It took me a whole five minutes to get it and this just may have been a glitch in the game. I would jump, climb almost to the top and drop back down to the same spot. Again and again, for five minutes. I had a few choice words which led to my two dogs thinking they did something wrong judging by the look on their faces. Sorry pooches, it’s not you, it’s these poor controls.

The environment in Thief is more open than most of the games that are “on rails” out there, but it’s not really open at all, it just has more paths. Players can choose how to get from one place to another on the map, as long as they don’t think too far outside the box, or above it for that matter. If players run out of rope arrows or things to climb, which is far too easy, then they are stuck on the ground. Players may think they can just jump from one pipe to another or shimmy up a gutter to be on the roof, but they would be wrong. Anything players can climb or use is highlighted in blue in their vision, so if it’s not blue, don’t bother; trust me. Frustration abounds at every turn as players are stuck trying to sneak from one pool of shadow to another while avoiding the guards. At one point, I got so frustrated I started killing them instead of avoiding them. It’s not really in the theme of the game, but it’s an option players have, and if they run out of arrows, it’s a viable one. So, it becomes one chapter complete with ten guards who won’t be going home to their digital families just because I can’t climb a pipe.

Thief’s gameplay is not all bad however, it can be a fun game and the story is interesting to follow. It’s dark and gritty, but it’s a good story. I won’t give that away in case you want to play this one, but I did enjoy the story line. There are plenty of side quests to keep players going and to line their pockets with gold so they can afford to upgrade their gear. That’s certainly something that players need to do, so don’t hesitate to do it. One piece of advice on that, players are able to buy a wrench early on and I feel they should definitely do it. I mean it, don’t pass this one up, I did and went back into the shop to get it. It’s that handy. 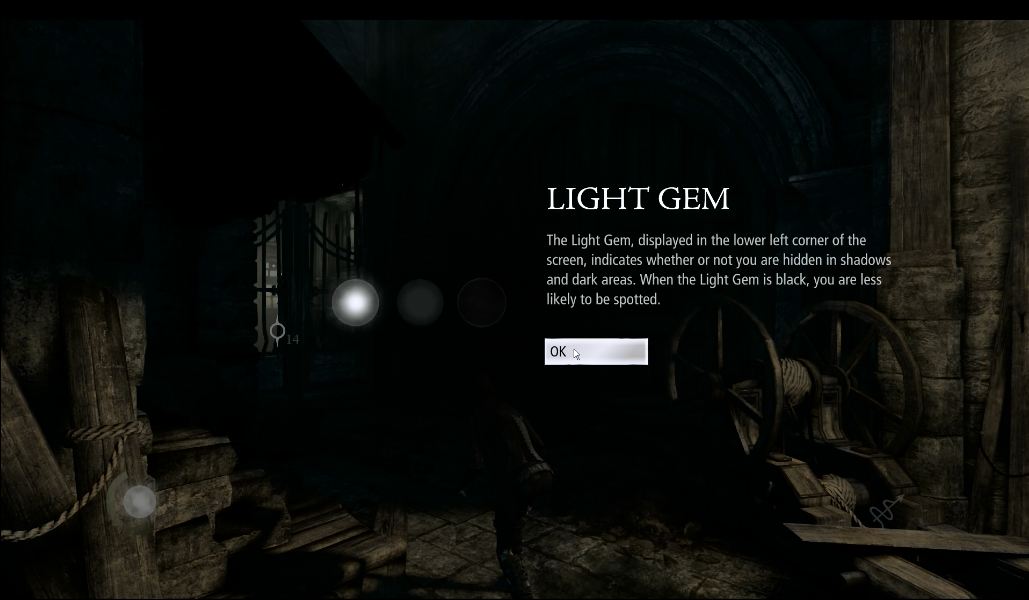 Thief is beautifully rendered and the environment is dark and brooding, like something out of a Goth’s wet dream, all smokestacks, ash fall, and depression. The lighting effects are nice with most of them being destructible or having the option to switch them off in game. The sounds are also very well done, which is nice because it’s incredibly important to the gameplay. Conversations through walls and the guards talking to one another are great hints at what is really happening here, so pay attention, it will help pull players into the story.

While the gameplay frustrates me, it’s a nice break from the fast paced titles out there and allows me to slow down and think through a situation. Despite all the glitches and frustrations I encountered, it’s an enjoyable game. If players want to replay a mission or level, it’s available after they’ve completed it. Players can go back at any time to see if they can find all the hidden baubles they may have missed.

Final verdict: Thief is fun though sometimes frustrating, but still worth the ticket if players can find it on sale. This title really needs some polishing and patching for it to really shine.

Thief Review: A Beautiful Game That Doesn't Quite Steal the Show