Despite the fact that dice seem to hate me, I really do enjoy dice-heavy games. I think it’s because the random elements make them highly replayable – and I’m all about replayability. It’s also probably why I was so eager to check out QUBQST (pronounced “Cube Quest”) from sinocono games. It’s an entertaining game to be sure, but it can feel a little rough around the edges at times.

It’s worth noting that QUBQST requires some assembly. Due to the need for so many custom dice, and being published through The Game Crafter, you’ll have to make sure to load up the sticker guide and put all the dice together before you can get started. It doesn’t take too terribly long, though, and I found the process to be oddly pleasing. The rest of the components are pretty nice, especially the reference cards. I did find the size of the included dice bag to be an issue as it’s just too small to conveniently help with randomizing the occasional dice draw. Plus it’s way too small to hold the game in its entirety, which is a major bummer. It’s functional on a basic level, but a larger bag would have been a whole lot better – it’s something of a shame to have to buy another, larger bag out of pocket. 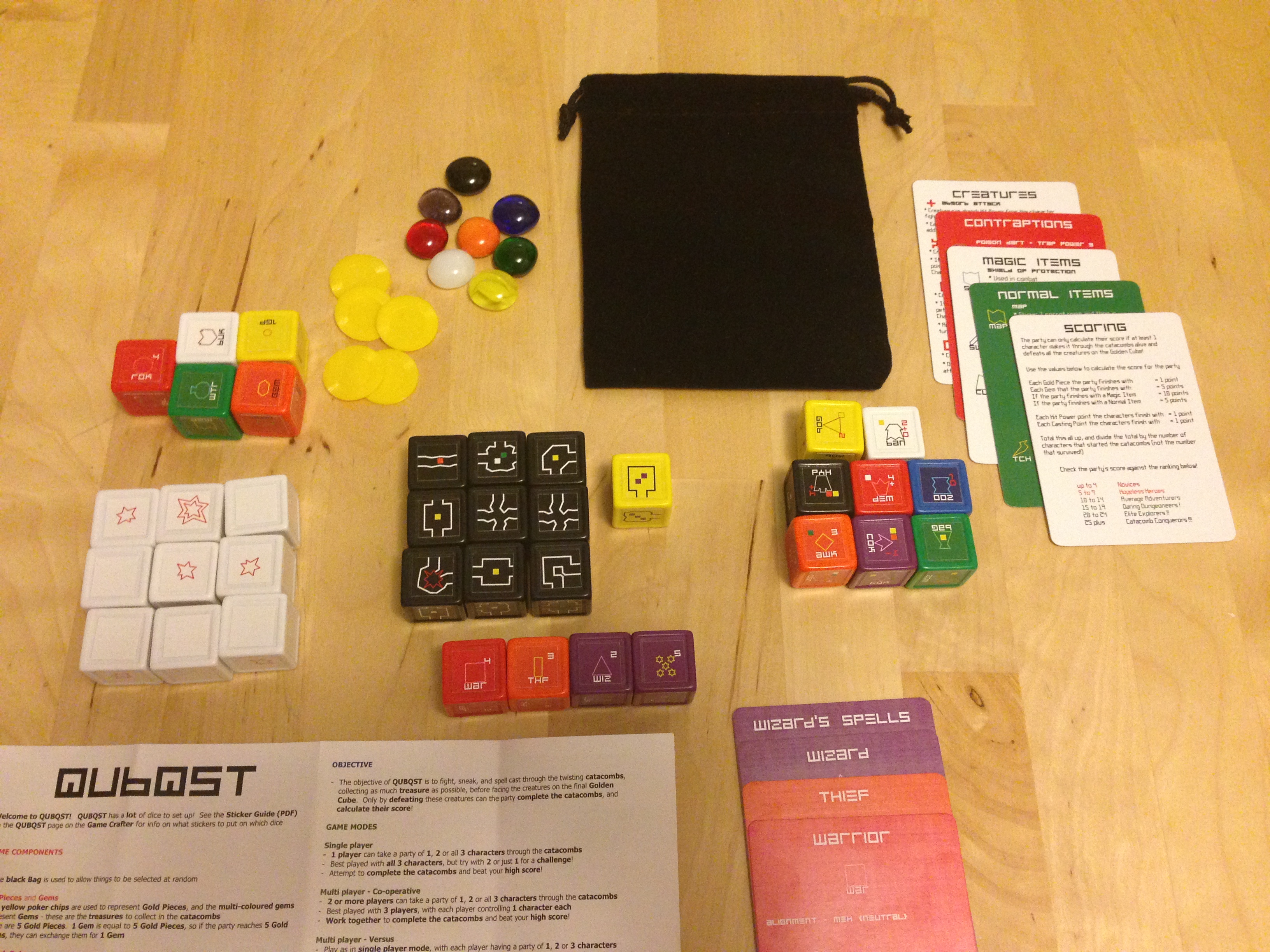 What sets QUBQST apart from other dice-themed dungeon crawlers like Dungeon Roll are its more in-depth (no pun intended) mechanics. Dice are used to determine the dungeon layout, assign creatures and possible loot to encounters, activate a character’s special abilities, cast spells, search for hidden rooms, disarm traps, and more. It can seem a bit daunting at first, but the basic rules are actually pretty easy to learn and all the nitty-gritty details can be looked-up easily on the included reference cards. And I have to say, I’m really fond of just how many options players have available as they explore the dungeon and work their way to the end (the Golden Cube).

Rules are available for solo, co-op, and versus play, and I have to say that playing it solo has thus far been really fun. Super-difficult (I’ve yet to actually finish a single dungeon), but fun. Co-op is also very cool in that it gives each of up to three players the option to play as a specific hero and make use of their abilities for the good of the group. Versus… not so much. It’s not that competing with another player to see who can complete a delve with the most loot isn’t a neat idea, it’s just that QUBQST takes a fair bit of time to set up and play, which leaves the other player with some unfortunate downtime. It’s better when letting the non-delving player roll for creature encounters and traps and such, but it can still drag. And while I’m on the subject of scoring, I can’t help but feel like more could have been done with the treasures (gold and gems) than simply using them to keep score. Exchange them for a magical item between delves, perhaps? Maybe an expansion or new rules that account for a visit to a nearby town where the heroes can resupply? I dunno, but I really think it could be pushed farther. 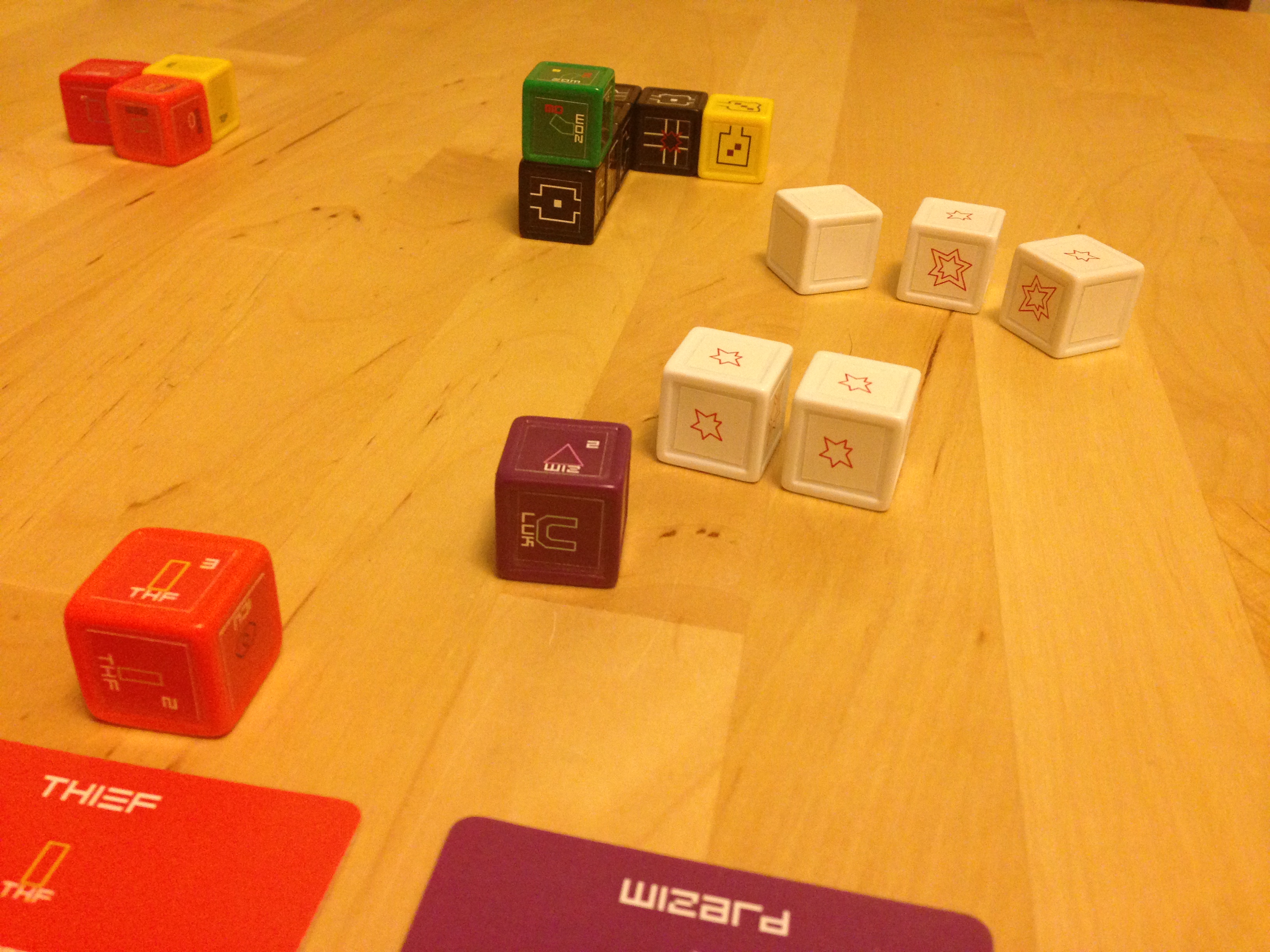 Unfortunately, as I’ve mentioned, it can feel a bit rough at times. The bag that’s included makes randomly drawing dungeon and encounter dice pretty awkward (it’s very tough to actually mix them all up in such a small bag), and being able to identify dice at a glance can be very difficult. I mean picking out the dungeon and combat dice can be really simple, but trying to separate creatures/heroes/equipment/items/etc is a whole other matter. I feel like something as simple as colored boarders around certain dice (i.e. one for creatures, one for heroes, etc) would make sorting them much more convenient.

Despite my griping about the diminutive dice bag, difficult to distinguish dice, and underutilized treasure, I really do enjoy QUBQST. It’s a great solo and/or co-op experience for players who want to explore a dungeon without the complexity of a deep RPG but is a little more involved than other similar dice games. Really it’s like playing really, really, really old school Wizardry on a flat surface with dice, which I’m all kinds of okay with.