Dark Souls II – Thank You Sir, May I Have Another? 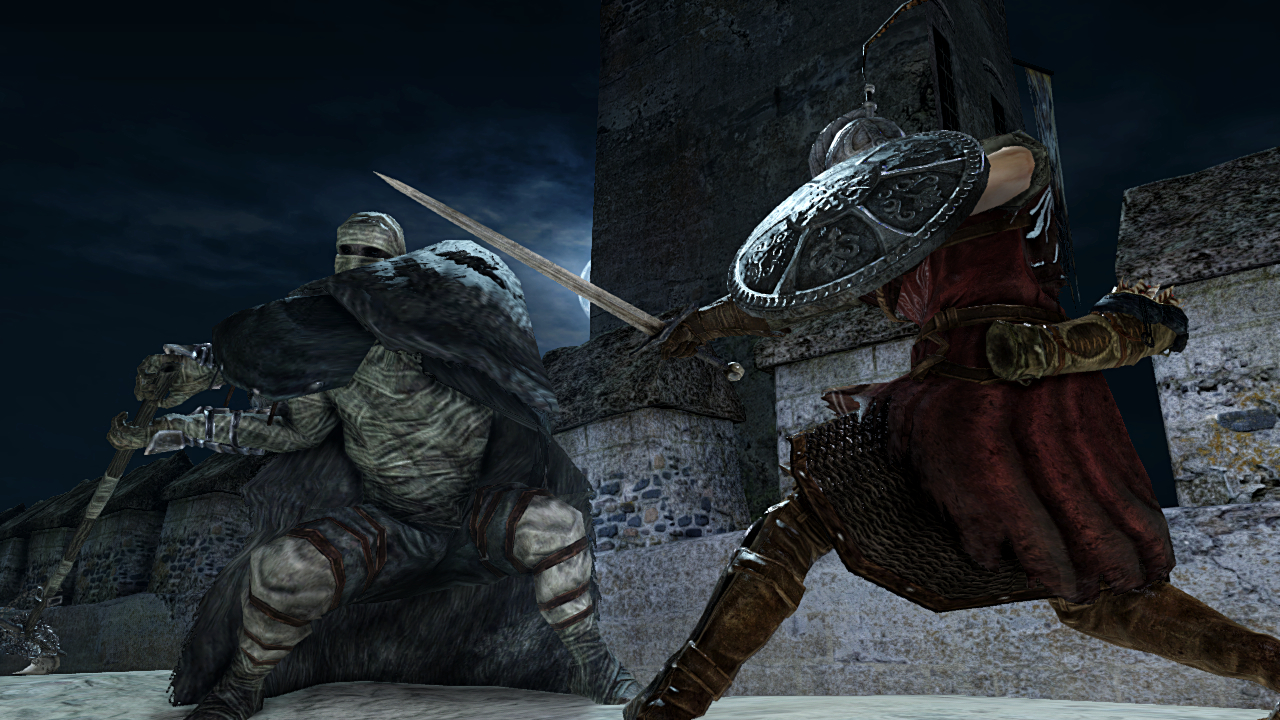 After what felt like days spent slowly creeping through almost pitch-black corridors – my shield always at the ready, constantly checking behind me and jumping at the slightest noises – I’d finally found a way out. My trusty torch had dimmed quite some time ago, so I’ve been more or less inching my way along using the incredibly tiny bit of ambient light. A sense of relief washes over me, quickly accompanied by a sense of dread. I mean, just because the path ahead was obviously in broad daylight doesn’t mean it’s going to be any less dangerous. Heck, I wouldn’t be surprised if-yup, there we go. A zombie-like soldier (a shell of what used to be a person, really) slowly shambles out of a small opening off to the side. If I’d rushed ahead, he would’ve been able to sneak up behind me with no trouble. I dispatch him without incident and finally make my way into the light. A gorgeous, expansive vista stretches out before me, much of which I know I’ll be able to explore eventually. But first I need to find a place to rest. I ready my shield and press on. 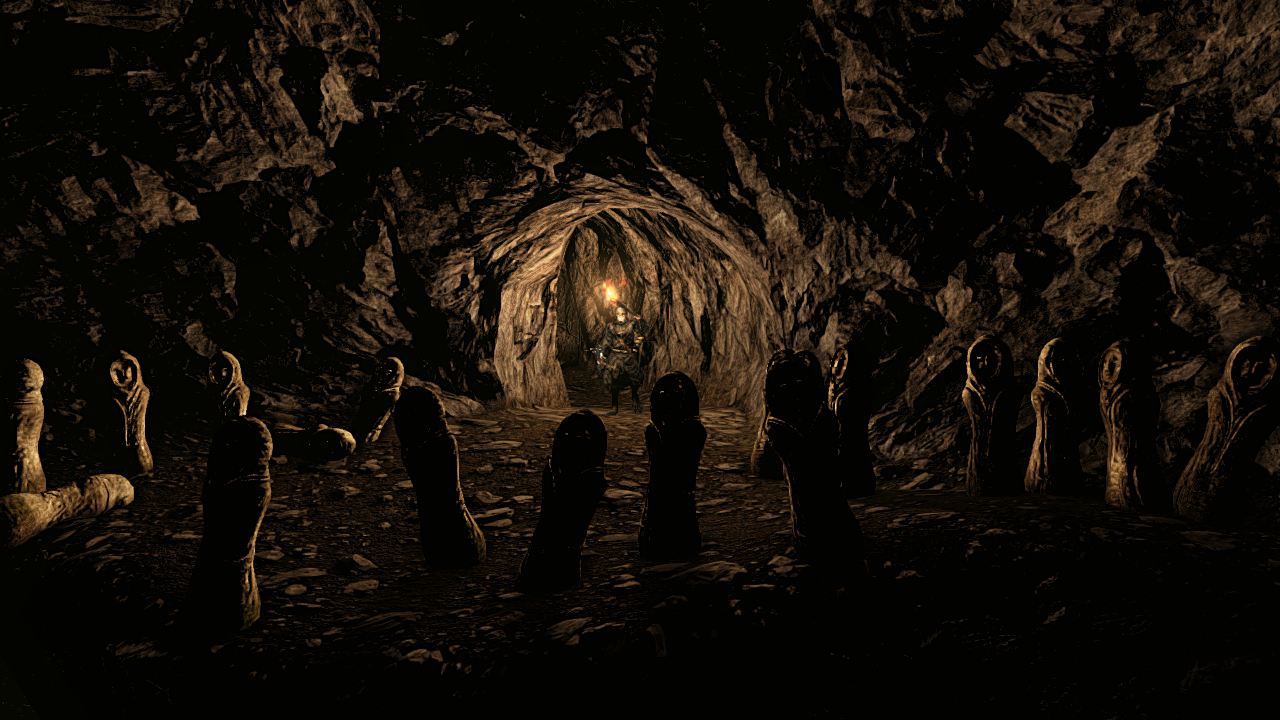 In many ways, this is the quintessential Dark Souls II experience. Unfortunately there are also quite a few small issues (technical and otherwise) that come dangerously close to all but overshadowing the lovingly crafted tension – and even the fun.

Dark Souls II isn’t a direct sequel to the first game (although it does have a “2” in the title), but more of a separate story that takes place in the same world. This time events unfold in the rather doomed kingdom of Drangleic: a pretty not so nice place where lots of Undead are drawn in order to collect souls in a desperate attempt to hold on to their humanity as long as they can. That’s right, they have to collect souls in order to maintain their humanity. I don’t know, I didn’t come up with the idea. Anyway, you’re job is to explore the kingdom, kill stuff, and die a whole hell of a lot as you work your way towards (hopefully) restoring the kingdom to its former glory. Or at least make it a teensy bit more hospitable.

If you’ve played Dark Souls or even the original Demon’s Souls, then you’ll have a good idea of what to expect in Drangleic. Even the lowest for of enemies are dangerous, traps and perilous drops are everywhere, there’s no handy map to navigate with, when you die you drop all of the souls you were carrying, and so on. The ability to recruit other players for cooperative play or invade another player’s world as a phantom are also still around, and covenants (essentially online clans that involve PvP attack/defense missions) have been made a bit less obtuse. The world is as mysterious and expansive as ever, and enemies are suitably terrifying when you encounter them for the first time. 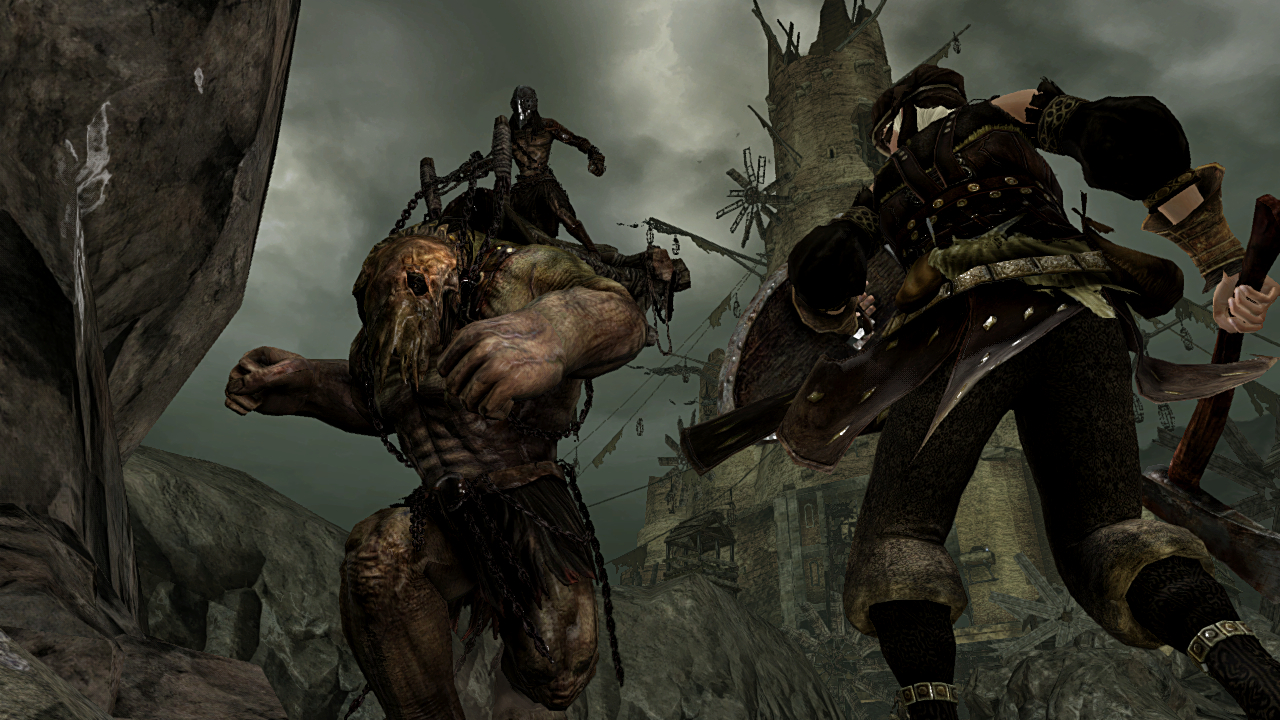 A few changes have been made to the formula, however, most of which I feel were for the better. First and foremost is the use of the torch. When acquired you may light it at any bonfire and carry it with you in place of an offhand weapon. It definitely helps a great deal with walking through dark corridors, and you can use it to light sconces and such along the way (both as a means to illuminate the area and mark places you’ve been), but the toss-up is it only holds a flame so long before burning out and it prevents you from using a shield or two-handed weapons. This is actually why I enjoy it so much: it makes navigation a bit more friendly to players who are used to maps (or just have a horrible sense of direction), but it doesn’t actually make the game any easier since simply carrying a lit torch is a handicap in melee combat.

Another somewhat controversial change is the tweaking in “accessibility.” You see, Dark Souls II is absolutely not an easier game than its predecessors. However, the beginning area has been toned down quite a bit to make it a bit more welcoming to newcomers. Again, not easy, but less immediately punishing. Similarly, all enemies have a sent number of times they can respawn. Some players consider this to be an awful idea because it removes a great deal of the challenge from the game. In my experience, however, it’s been great. The number of times most enemies spawn are quite substantial, so it’s unlikely that you’ll end up “poaching” all the enemies in an area to extinction. And by the time you do start to notice fewer respawning enemies you’ll most likely be relieved to not have to waste several minutes dancing around the same monsters over and over again as you make your way back to a specific location for the umpteenth time. Honestly I think the only players who this feature really hurts are those who like to farm enemies for souls, and there are items available that will reset enemy spawns while upping the difficulty, so they aren’t exactly being left out in the cold. 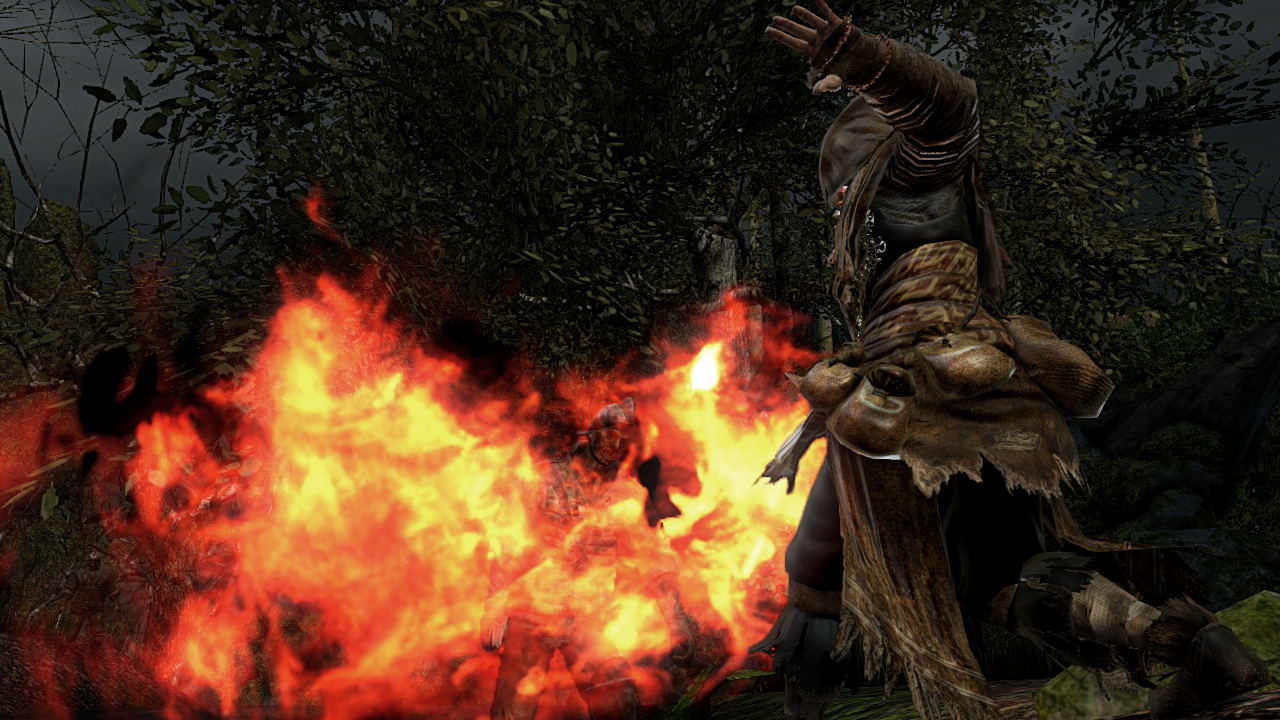 Unfortunately there are some issues with Dark Souls II that all but killed my ability to enjoy it. Well it was really one specific thing that about ruined my fun, but I’ll save that one for last. First I want to mention the graphics. The world of Drangleic is beautiful and full of all sorts of creative creature and architectural designs, but much of it actually looks kind of ugly up close. Textures get pretty muddy and repetitive in many of the environments, which can really kill the atmosphere that’s otherwise top-notch. I’ve also really begun to hate trying to buy new equipment at any of the various merchants sprinkled throughout the kingdom. This is because, while the stats of each weapon and piece of armor are displayed in the shop window, there’s no convenient way to compare these numbers to what you’re already using. Well, aside from exiting the shop and opening your inventory, then memorizing or writing down the appropriate values for your gear, then going back into the shop and cross-referencing everything. Seriously, there’s absolutely no reason for the interface to be this clunky.

But by far, the biggest annoyance I’ve come across in Dark Souls II is the combat. I know, it sounds blasphemous for me to say but I’ve really come to loathe melee in this game – and I always prefer to play melee. The problem is that the hitboxes are off for many of the enemies. I’ve seen arrows that should’ve missed actually do damage to creatures I’ve shot at. I’ve had monsters hit me when I was definitely outside of their attack range. In a game like this, which requires precise movements and well-timed attacks, failing (or even succeeding) because of hitting air and having it miraculously cause damage is incredibly irritating. It’s frustrating when it happens to me, and it robs me of the satisfaction I expect when taking down a particularly tough foe.

There are so many things to love about Dark Souls II, but there are also quite a few things about it that I find myself rather frustrated by. I wouldn’t say it’s terrible, but it’s definitely last on my list of preferred Dark Souls/Demon’s Souls games.