So I’ve been playing Project Spark for a while now. Messing around, learning, creating, brainstorming and overall, enjoying myself. The games other people make are fun and the creation aspect can get addicting quite easily. Yet throughout all my time with the game, I’ve always had a niggling feeling in the back of my thoughts, like something was missing. Recently, I finally realized what that was.

You see, Project Spark has been touted as a “game creating game”. The biggest draw has been that, beyond something like MineCraft, Project Spark allows you to make some truly impressive, fully realized games. Complete with stories, gameplay mechanics and worlds of your own design. Best of all, it has seemingly delivered. As the recent collaboration between Team Dakota and Linkin Park showed, Spark is an amazing creation tool. So then, what’s missing?

The problem with the idea behind Spark thus far is that, while you have this amazing tool at your fingertips for creating games, you’re limited in terms of the reach of your games. What do I mean? Well, regardless of how amazing, deep, innovative or beautiful your creation is, it will always be limited to people who play Project Spark. Meaning, it’s not so much a game, as it is a Project Spark mod. It would never have an identity of its own, visibility outside of people who play Spark. Say, in the Xbox Live or the Windows 8 Market.

Then of course, there is the issue of monetization. Personally, that’s not as big an appeal to me as the idea of being able to make my games more accessible and available to people, but it is a fair point to think of. A lot of these games are, or will be, fully realized projects with significant time and effort investments on the part of the creators. In this respect, Spark becomes much like a game engine, such as CryEngine, Unity or Unreal. Shouldn’t creators be able to monetize their creations if they so choose? The logistics of this is something Microsoft would have to figure out, but something like exclusivity and profit sharing aren’t hard to imagine.

Which is why, the latest news from the Project Spark team is somewhat heartening. Having fully realized these feelings, I posed a simple question to the Spark team via Twitter, and the response was encouraging: 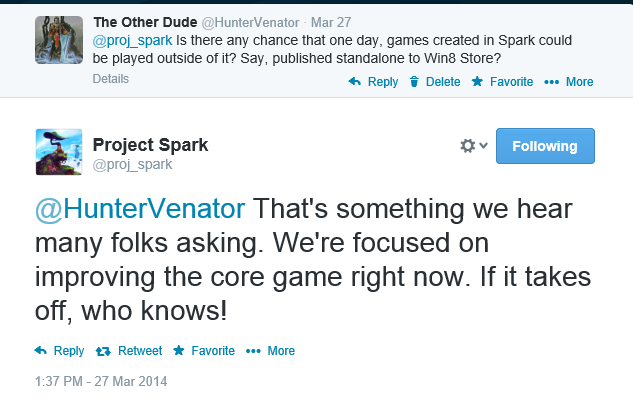 It seems they’re aware of it and have actually given consideration to the idea. It’s great to see that they didn’t ignore or dismiss the possibility out of hand. Now, I want to be clear about something. Project Spark is still in Beta. It is an incomplete product with many features still being improved upon and added. Dakota’s focus should be on making the best damn game possible. In fact, what they have built so far is pretty amazing, especially looking at it in comparison to its predecessor, Kodu.

However, it is because of the amazing capabilities and potential of this product that I’d love to see them keep pushing the limits of Spark. “Who knows?” That’s exactly the attitude to take when looking at the potential future of this product. Don’t set hard limits, don’t assume limits. Spark is an idea founded on the imaginations and ideas of its users. However, that should apply, not only to the creations in game, but to Spark itself. It should grow, evolve, re-imagine itself continually based on the needs and ideas of its users. Project Spark should be just that, the first spark in what will hopefully become a grand conflagration of creation, imagination and innovation.