For North American gamers, being a fan of Japanese products can often be somewhat of a struggle. Most Japanese games don’t come to the states, and the ones that do suffer large delays. It’s hard on consumers to see games they want but cannot get. The Hatsune Miku series is no exception to this rule. Vocaloids (singing voice synthesizers with a humanoid avatar) are popular in Japan, but are hardly known of outside it. Lack of an existing fanbase makes it even harder to sell this game which was virtually unmarketable in the states from the get-go. While it’s fun in its own right, it’s clear why the Hatsune Miku games took so long to come to the West.

Surprisingly, after large amounts of fan demand, Sega of America localized Hatsune Miku: Project Diva F on PS3 last August. The game sold well enough that the Vita version has been localized for a digital-only release. The Vita version is largely identical to the PS3 version, which means it features an array of songs sung by various Vocaloids (Miku, Luka, Rin, Len, Kaito, and Meiko) that are playable through beat-matching gameplay. However, PS3 players get ten more songs than Vita players. To get these ten songs, you have to pay $10 for a DLC pack. This isn’t a huge deal because the Vita version was $10 cheaper than the PS3 version to begin with, but it’s an annoying inconvenience for those who want the same amount of songs as console players. 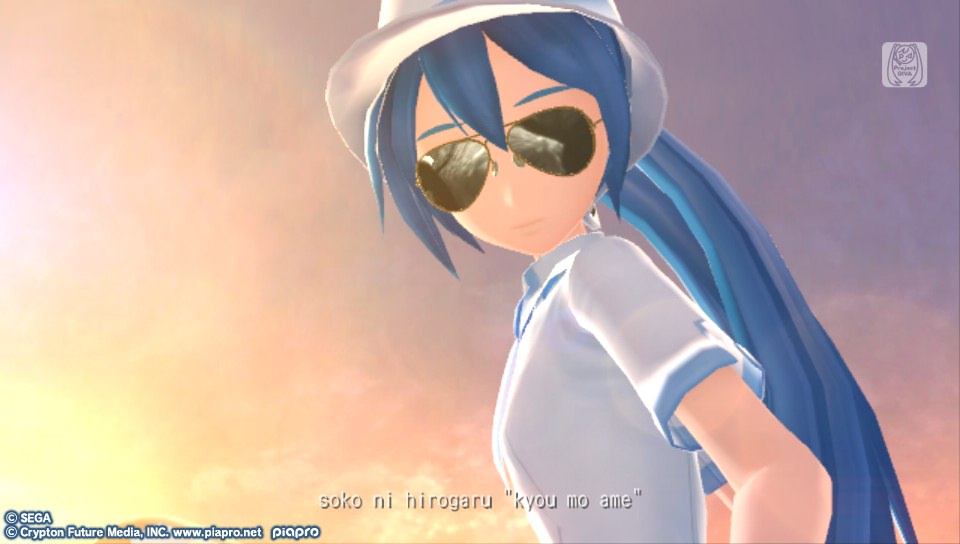 The Vita version does have a few other differences from the home console version of Hatsune Miku: Project Diva F. While it doesn’t have the benefit of a larger screen, the game runs in native resolution at twice the framerate (60 FPS) on the PS Vita. It looks incredibly sharp and has some of the finest visuals on the system. Each song is accompanied by a video, and every one has a different style. Colors are used in different ways depending on the mood of the song. Some are more vibrant while others may be mellower. The videos create an atmosphere for each song, and usually aren’t that distracting during gameplay.

The music itself is fantastic. All of the songs are varied, from pop to rock, and even some techno. It’s generally very catchy as long as you like the voice of the Vocaloid. All of them are good in their own right, and they each get their own songs to star in, as well as some group routines. However, if you are not a fan of Japanese music, stay away at all costs. The Japanese vocals may be grating for some, but I think there’s no other way they could or should have done it. It’s worth noting that the lyrics have largely been left untranslated, so anyone hoping to gather any meaning from the songs will have to draw it from the videos unless they know Japanese.

Hatsune Miku: Project Diva F is a rhythm game, which means that the gameplay consists of matching beats with timed button presses. What Hatsune Miku does differently is that it utilizes most of the features of the Vita. Not only does it require face buttons to be pushed, but also the D-Pad and touch screen. While pressing buttons works consistently, the touch screen has to be swiped in a specific way that doesn’t come naturally. This bothered me for the first couple of hours, but I got used to it as I went along. Still, it’s hard to swipe quickly before or after having your fingers on the buttons, but this doesn’t occur in most of the songs.

The catch comes with the difficulty of the game. Four options are selectable for any song- Easy, Normal, Hard, and Extreme. Easy and Normal are unlocked from the start, but Normal must be cleared to play on Hard, and Hard must be cleared to play on Extreme. Hatsune Miku: Project Diva F is startlingly hard and has a fairly steep learning curve. However, once you’ve played through all of the songs (which takes a few hours), it becomes much more manageable. 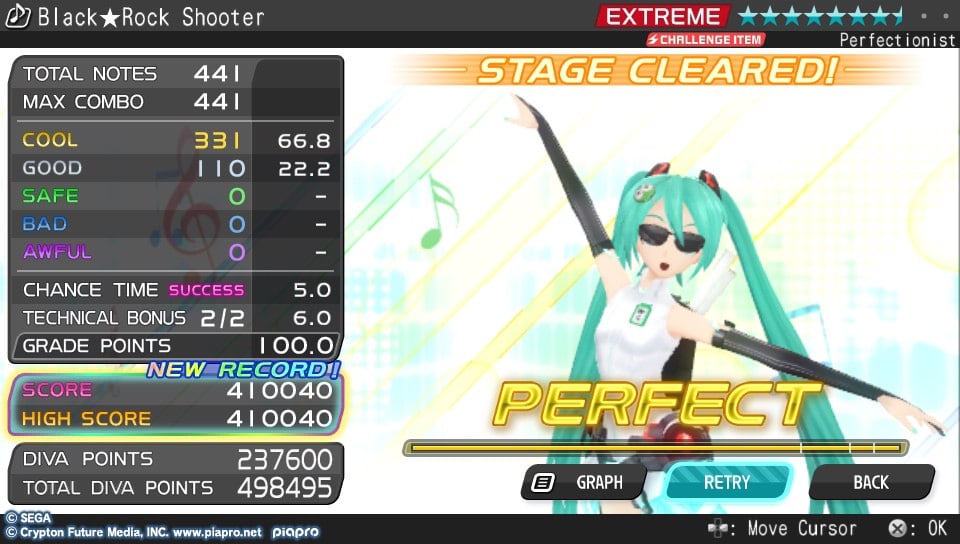 The real fun of the game is that it’s built for perfectionists. The challenge comes with attempting to perfectly clear a song to get a Perfect rating. This takes many tries and requires lots of practice, and doesn’t give any in-game reward. Still, perfecting a song on Extreme is the most satisfying thing I’ve done in a video game in a long time.

The game offers a few other modes, though they pale in comparison to the main game. It’s possible to edit your own tracks into playable form through Edit Play. However, this is a very complicated process that would take several hours to successfully put a song into the game. While the potential is huge, this mode is only for the most dedicated fans. The other prominent mode is the Diva Room. In this mode, you get to spend time with your favorite vocaloids and play a couple of minigames. Sadly, these are not that engaging and are far too simple to be chosen over the Rhythm Game mode itself. It feels like Crypton Future Media wanted to emulate virtual pet games by allowing the player to feed and play games with the Vocaloids, but it starts to feel much more awkward when the game asks you to tickle them. 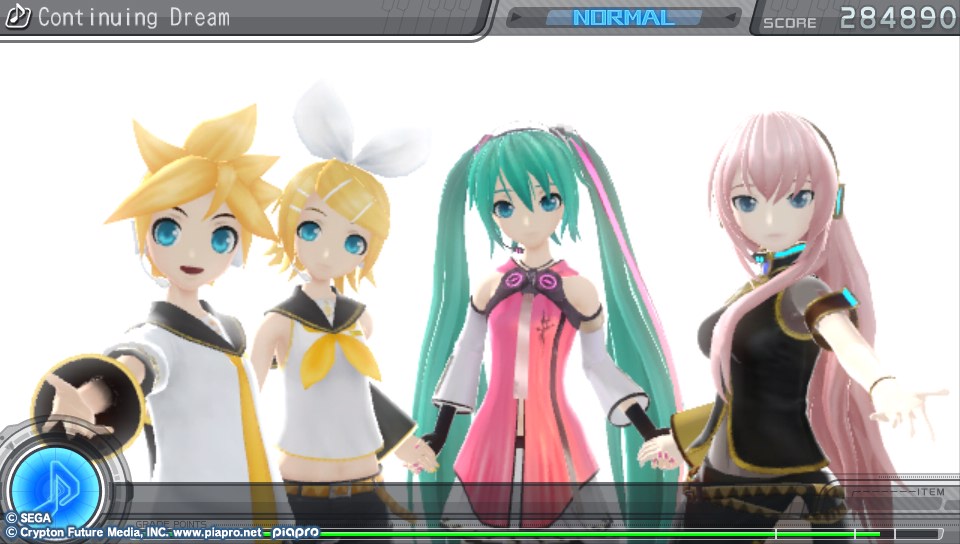 All in all, Hatsune Miku: Project Diva F is a perfect fit for fans of Vocaloids, Japanese music, or fast-paced rhythm games. However, for anyone else, it’s probably not a good fit. Sega of America has done a great deed in bringing the game to the West, but it doesn’t keep it from feeling extremely foreign and strange. This isn’t necessarily a bad thing, but it makes the game extremely hard to recommend to the majority of gamers. For Vita owners looking for something different, it’s worth your consideration.