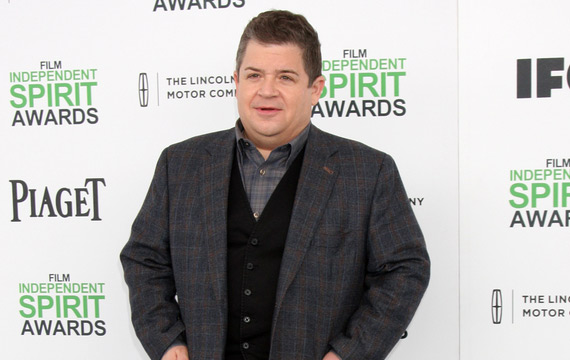 In recent years Patton Oswalt has made himself a huge presence in television with notable roles on Burn Notice, Justified and an upcoming role on Marvel’s Agents of S.H.I.E.L.D. but Oswalt made his start in stand-up and continues to perform comedy in addition to his many roles. Oswalt’s fifth stand-up special, Tragedy Plus Comedy Equals Time, shows us a more grown-up version of Oswalt that we have never really seen before. His new special, directed by veteran comedian Bobcat Goldthwait at the Spreckels Theater in San Diego during comic-con, is by no means his best performance but still runs circles around a majority of working comedians.

Sometimes, fans fall in love with an “edgy” comedian and can’t wait to see what they will say next. And then that comedian has a child and loses a great amount of their edginess. When Oswalt’s new special starts I did have that fear. The first third of this 70-minute special is largely devoted to stories about his daughter. Some of them are funny observations by Oswalt but mostly they consist of anecdotes of a father about his daughter. It’s not terrible but doesn’t really ring of that subversive nature Oswalt usually lends to his comedy. However, during the middle segment of the special Oswalt really seems to hit his stride and brings out strong material. It’s a nice transition when he moves from stories about his daughter to a wonderful story about how having a daughter seems to give him a more childlike forms of depression (this is illustrated perfectly in a story involving Lean Cuisine and the song Africa by Toto). The comedy is much more introspective and covers a variety of topics from signs that he is turning old to his relationship with audiences (specifically, drunk college kids).

Overall, the special is enjoyable and might be a good introduction to those that have not experienced Oswalt’s comedy before. They might not find it as jarring or shocking as previous specials. His style is very self-deprecating and his stories have a ring of truth rather than stories made up for the purposes of jokes. For long time fans you may find this special a bit odd. It starts off slow, builds to a strong middle but, unfortunately, does not end on a very strong note. But, as I said before, even the weaker material is so much stronger than what most other comics are doing today. His style is very much that of a storyteller in the style of a Bill Cosby rather than a joke teller that just sets up a series of punch lines. It’s want I could best describe as a slow burn. It’s definitely designed for those with patience for comedy and not expecting a series of jokes. Overall, it’s worth the time. There is an overabundance of subpar comedians working today and Oswalt shows what comedy can look like when done right.

Tragedy Plus Comedy Equals Time is scheduled to be released on April 8, 2014 on Comedy Central Records. It comes in a DVD/CD Combo set that also has a card for a free download inside. The audio download is also available on the Comedy Central website for $5.00. The DVD does not contain any bonus material.

'It's Always Sunny in Philadelphia' Renewed for Two More Seasons