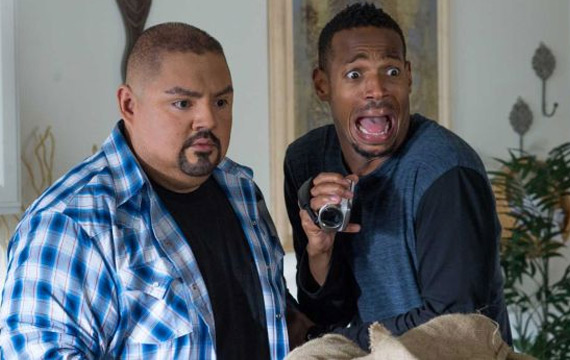 We had the pleasure of sitting down with Marlon Wayans as he came through Atlanta promoting his new film Haunted House 2. We chatted with Marlon about his new film, what it would take for him to move out of a haunted house, and his professional and creative evolution that helped him create this movie.

How’s it going? What have you been up to?

Marlon Wayans: I’m on this stupid cleanse. Trying to live, trying to look young, trying to look like Pharrell and his virgin tears drinking self. I’m trying to age backwards. It’s not happening. I think I need that big ass hat he got on. What is that thing?

Marlon Wayans: That big ass hat? Yeah he has a whole beauty salon all up under there.

I want to start off by asking you about you evolution of writing and producing for this particular movie. I guess it’s kind of along the same script, but how have you evolved behind the scenes doing this particular installment of the movie.

Marlon Wayans: Well I think a lot of ways. I think when we did Don’t Be Menace 20 years ago… It was a bunch of just funny sketches… It was a really thin story and we just… I don’t know, funny characters… and we just went balls to the wall crazy. I think pop culture was at a place, and I think that movie was just such a… like how do you make fun of Menace II Society and Boyz n the Hood? Those two good movies are about something so important in terms of black film making and about exposing what the hood is like. But we just have a dark crazy sense of humor in that we can take the darkest thing and find light and that’s what kind of led us to horror. As dark and as crazy and as sick of a world horror movies can be, I always find something funny in it. Watching the Paranormal franchise, even from Scary Movie the evolution for me is… I think that this one actually is a little more grounded in the storytelling. I think that you take a chance by being grounded in comedy and you sit in silence, because a lot of times in comedies you’re desperate to get that laugh. It’s more forced. I thought by doing the Paranormal franchise, it’s a lot less active than the slasher franchise of Scary Movie. In the Paranormal franchise, nothing really happens. They tease you for… it’s like teenage sex. You just get hand rubbed and god damn dry humped for 4 years and then finally at the prom she gives you some. You can’t really enjoy it because you finally let that one out that you’ve been holding so you only last 5 seconds and you don’t have the strength to do it again because you feel embarrassed.

So that’s what Paranormal Activity feels like. In part one, we kind of just laid in the pocket and let stuff happened, but part two I think we turned it up because we made Malcolm put upon – so there’s so many things happening that we pulled from other movies. You got the creepy doll from The Conjuring haunting him, he has his ex-girlfriend Kisha is haunting him. He has this house that’s haunted. His new step daughter has this box from the possession and it’s haunted, the son has this imaginary friend that’s the worst imaginary friend in the world that keeps tripping him and teaching him out to start fires. There’s trouble all around, and the only one that’s actually seeing it is Malcolm, because white people walk through these movies like, “Oh, everything is all good.” No it’s not!

I think you had the smartest reaction to being in a haunted house which is just get the hell out of there. It seems like such an easy solution.

Marlon Wayans: Why didn’t you just leave the house? Yeah.

I’m curious, for you in your personal life, what would it take to happen in your house for you to be like, “All right, I’m done”?

Can you talk about working with Jaime Pressly, because obviously with her television work, she’s really built up a comedic angle. How much fun was that?

Marlon Wayans: She’s a good, strong comedic actress and she understands how to play a situation… because me, I need somebody to play off of, because I’m always trying new things and so I need a strong anchor. She’s a very strong comedic anchor.

I thought Jaime, having the years and the veteran experience of television, for movies she’s still a fresh face. People want to see her on a big screen. She’s beautiful on top of that and so like I said, you put a bunch of people in a movie that people want to see and people like, you put together a formula that could be successful. Hopefully.

Your character Malcolm… I know in the second one he’s trying to establish a new life after he had that crazy incident with his girlfriend, so which do you feel will be more nerve wrecking, his undead girlfriend moving across the street or a reoccurring of the paranormal activity?

Marlon Wayans: I think the girl moving next door across the street, because she is the paranormal activity and she just won’t let me get away. You know, some ex-girlfriends just won’t let go. I got a few.

What is your favorite horror movie?

Marlon Wayans: I’d say Nightmare on Elm Street Part 1 blew my mind because the thought of somebody killing me in my sleep… you can’t wake up out of a dream. You can’t make yourself… you know how many dreams I’ve had where I fall off a bridge. and I’m waking up in class and I’m gathering myself like, “Oh my god, that really happened!” That’s the scariest thing in the world because you’re defenseless.

It wasn’t until Part 4 when they was like, “All right, we’re going to all bond together!” But I loved Part 1 and I loved Part 2 because Freddy had a sense of humor, and that’s the first time we’ve seen a bad guy with a sense of humor. It’s the first time you actually started rooting for the antagonist as he was the protagonist of the movie. It was like, “kill all them kids because you’re funny. Please get them. He’s sleeping, this one’s sleeping,” because you knew he was going to bust his head through a TV and say, “Welcome to prime time, b***h!”

Freddy Krueger Nightmare on Elm StreetWhat did you take away from the first film that you applied to this one?

Marlon Wayans:       Everything, especially when it comes to filming and the prepping. I think we didn’t learn our lesson because we was like, “this time around, we’re only going to shoot an 80 page script.” Lies. We shot 135 page script which really worked out to be 165 day script, and we shot it in 21 days which is ridiculous. Literally, that movie should’ve took us 10 weeks to film and 10 weeks to prep. We had 3 weeks of prep and then we had 21 days to film… or 25 was it?

I did take away, from the last one, we as filmmakers wanted to make it a little less hectic in terms of the camera work and find ways to settle the camera down, and just have the people come into frame and have the scenes more stable. Not so much movement, so that we could capture more of the jokes. There’s things I thought we missed visually in the first one, because when you’re doing a movie for these low budgets, under 3 million dollars, you don’t have a lot of money for coverage. You don’t have money for special effects. I was surprised we have absolutely any.

We’re not making a movie; we’re making a miracle every time out. It’s really hard putting that kind of cast together for 21 days in one location. I’m filming in a practical location which is a house. It’s not like I can break walls down and… you’re looking at a room and you’re going, “Well how am I going to fill them, where do we put the cameras? Well I can’t cover that, because we only got one camera. All right so how do we create this thing… all right so we’ll say that there’s a camera in the computer, but we got to establish that earlier. Ok, there’s security cameras. This security camera, that security camera, and this security camera” and you have to do all this in no time.

For the next one, I’m probably going to take all this into the next one, and I’ll probably not remember any of this sh*t and make all the mistakes and enjoy again, because I love the hecticness and the franticness of making films this way. You’re on your feet and you just go in those moments, “We need this or we need that. Oh, we’re missing this shot. Let’s get it. Let’s go, let’s go, let’s go” I don’t have time.

I think I’m proud of this movie, because I think we got a lot done for a little bit of money. It’s a lot more diverse in terms of the cast. The jokes come from a smarter place. We matured a little bit but still stay youthful, young, crazy, and slightly scatological, but I think it’s still funny. It’s more of a situation comedy in this one.

Haunted House 2 is out in theaters April 18!