I remember being fairly enamored with Go Fish! when I was very young, but my interest waned after a while and I’ve never really had the interest to play it since. Then Carrrds! comes along and reminds me of what it was like trying to figure out what cards my opponents might be hiding while simultaneously trying not to tip my hand. Okay, so I may not have played quite so intensely when I was eight years old, but that doesn’t make the game any less strategic! Anyway, Q42’s pirate-themed rendition of the classic card game has just enough twists to the formula to make it feel unique. And while it probably won’t be something you’ll sit around a table and play for several hours it’s a fun, light game to toss out in-between the heavier stuff.

All you need to play Carrrds!, as well as a few optional bits, are included in one tiny card box. The cards feel pretty durable, and sport some rather nice illustrations, but there’s this weird finish to them that makes them all “grippy.” I’m not entirely sure what the proper term for it is but basically the cards aren’t as slippery as you might expect, which makes shuffling something of a pain. I mean it’s nice to have cards that I don’t have to worry about when I do shuffle them, but actually performing said shuffle takes quite a bit of effort. 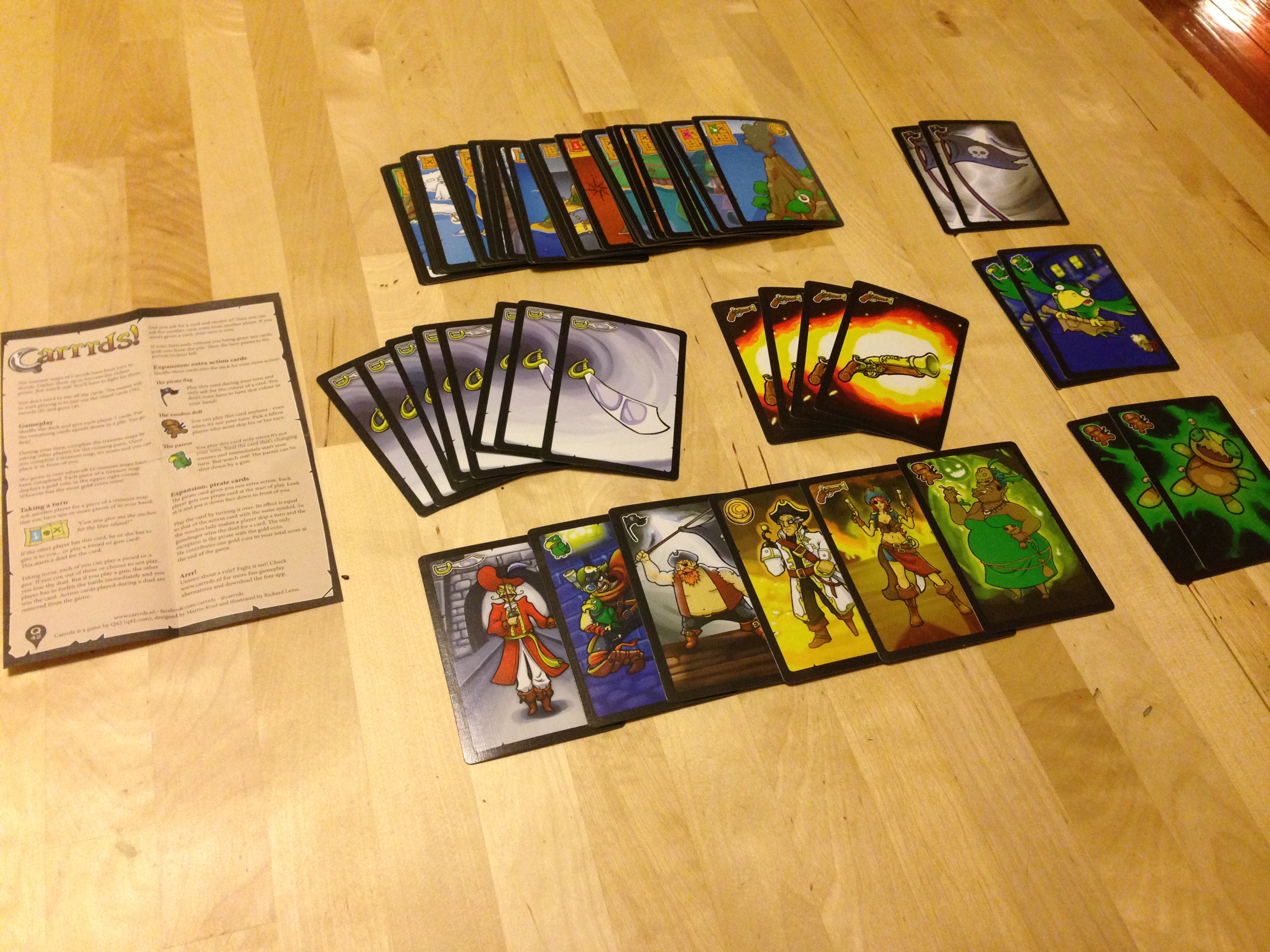 Sitting down and playing Carrrds! is far less problematic, however. It’s an incredibly straightforward game that only takes a few minutes to explain, and maybe a few minutes more to complete. Each player (from three to six) is dealt seven cards, most of which will be a piece of a treasure map. Their goal will be to gather all the pieces of as many maps as they can by asking other players for them – “Do you have a blue shovel?” – in order to earn the most gold and come out on top. Of course it’s not quite that easy. If the player in-question does have the map piece being requested, they have to cough it up. And if they cough it up, the player who asked about the map in the first place can go and ask another player (or the same player) for other map pieces. That is, unless, they have a sword they can use to fend off the player looking to snag their piece of the map. Of course that playing can also play a sword to counter the other sword. And if either player uses a pistol the fight ends immediately in favor of the one who pulled the trigger. Conversely, if the inquiring player doesn’t manage to abscond with a map piece they can draw a card from the deck in the middle. Then play continues until there are no more cards to swindle.

What’s interesting is how there are so many different types of maps. Some are only one card and can be placed immediately. Others require two or three pieces, and some go all the way up to six. It can take a while to complete some of these larger maps, but they also pay more at the end of the game so whether or not they’re worth the effort is a toss-up. Most of what you do in Carrrds! is a toss-up, actually. If you ask another player for, say, a yellow skull, then everybody knows you have at least one of the yellow map pieces. You’ve just made yourself a target. However, if you don’t ask you’ll never complete the map. Or what about using those weapon cards? It might not really be worth throwing down two or three swords for one piece of a two-part map, but then again maybe you want to force your opponent to burn through their weapons as well. 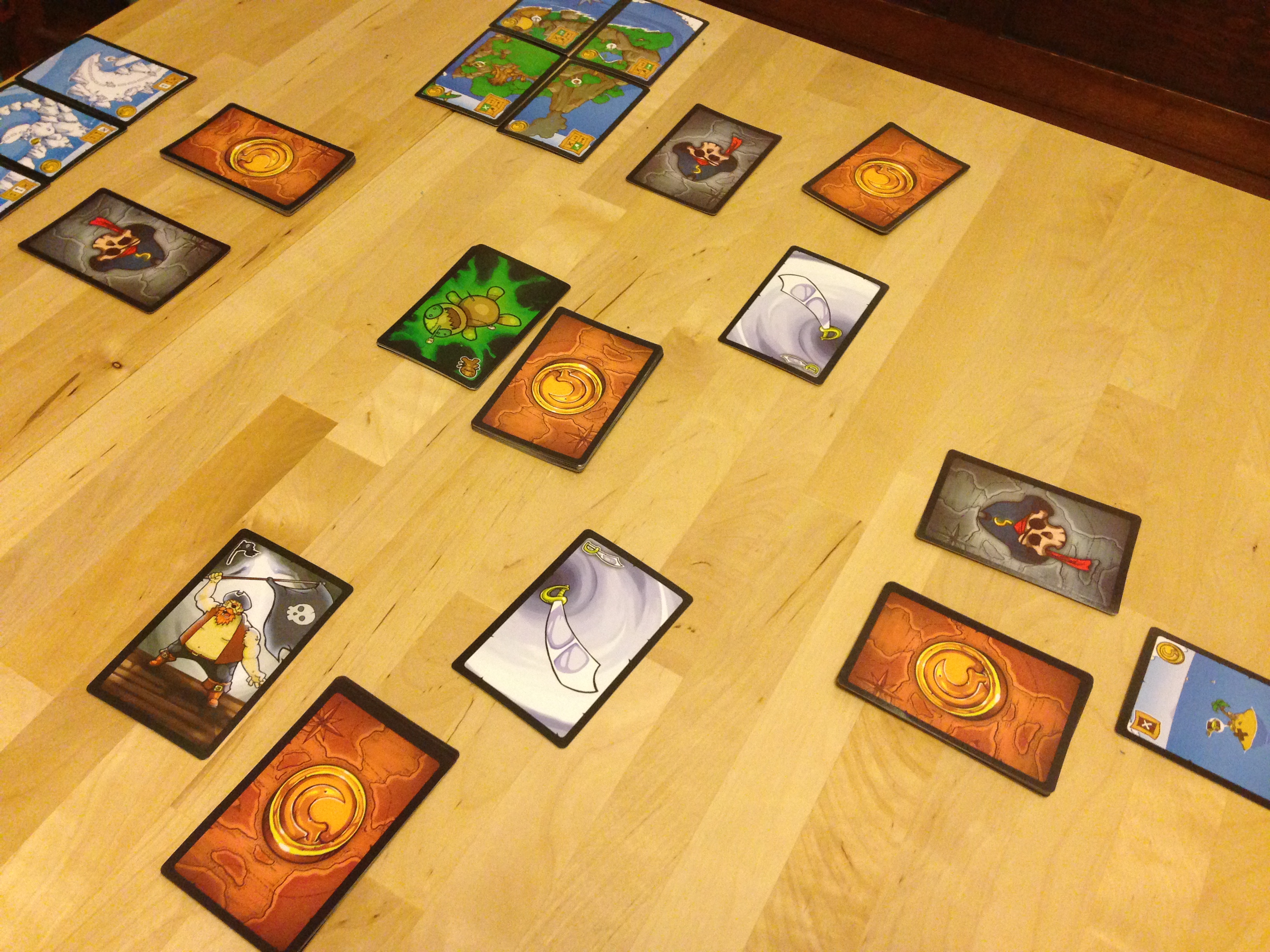 That’s just the basic version, though. There are also a number of other special cards included, such as Jolly Rogers that allow players to ask for a card color rather than a color and a specific icon, and they can even ask for something that isn’t in their hand. Then there are voodoo dolls that force players to skip their turn, but since I hate that kind of stuff I just take them out of the deck. Then there are parrots, which can be used to swoop in and steal a map piece when it isn’t even your turn. Finally, there are the Pirate cards that can be dealt out at the beginning of each game and sit face-down in front of each player. These characters are essentially the same as all the other non-map cards (swords, parrots, etc), but they’ll be available to aid the player in a moment of desperation – but only once. These cards add a fair bit of nuance to Carrds!, although at its core it’s still a fairly simple game. And that’s perfectly okay.

Carrrds! is something of a pain to shuffle (and get out of the box in the first place, now that I think about it), but overall it’s a quick bit of filler that’s fun for everyone. It’s easy to learn, easy to play, and can create its fair share of commotion when a duel breaks out!