So it’s been a little over two weeks since the official release of the Elder Scrolls Online, and the game is still a buggy mess. Let me qualify everything I’m about to say with the fact that I still VERY much enjoy playing this game and quite frankly am a bit addicted to it. However, the game is riddled with technical issues and what’s worse, their support structure currently leaves a lot to be desired. So let’s dive into our second look at The Elder Scrolls Online.

One thing that can’t be said about ESO is that it lacks maintenance and patches. There seems to be a new patch every other day and a maintenance every 3 days or so. If it isn’t one thing it’s another, and often times the patches designed to address issues seem to add so many others. The downtime is definitely an annoyance, but at least it appears they are making a serious effort to catch up, and it is definitely them doing the catching up, since the rampant bugs seem to be way ahead of them.

One of the major ones since my last post has been the fact that a significant number of users lost in game content. Anything from Gold, to weapons and armor and even expansions slots for their bank and inventory space. I seem to have gotten off lightly, having only my helm disappear, but others lost hundreds of thousands of gold. Zenimax believes they have since resolved the issue, but the items need to be restored on a case by case basis.

Another issue, which appears to be recently resolved, was the inability to see or interact with friends or party members in game. As you can imagine, this is a major issue for an MMO. Until a few days ago, it took jumping through several hoops to be able to see and help my nephew. Whenever we’d meet up he’d be invisible and I couldn’t see the enemies he saw. We’d have to try teleporting to each other, logging on and off, dying and various other tweaks. This also happened with a few parties we joined to run dungeons and I’ve seen it reported by various other players and friends. It seems to be working ok, but there’s one caveat.

You see the Elder Scrolls Online has a “feature” which is similar to the bug mentioned above. They have something called “phasing” which offers something of interest in the way the world develops around you. Progression through quests has effects on the world you play in. Which is actually a pretty cool feature. However, this also means that the game world exists in different states for different players. For this reason, if you and a friend are at different points of progression in a quest line, or if you’ve completed a quest your friend hasn’t, good luck trying to help him. You won’t be able to see him, or the enemies he’s fighting.

This is rather absurd in an MMO, the purpose of which is to play with friends. Being unable to assist friends with their quests because I already completed them seems completely counter-intuitive. Keep in mind, this is only for certain quests, but it does seem to be a significant amount of them. There is a feature built in the game that allows you to share quests with friends, but it doesn’t work if the other person has already completed the quest. In fact, I haven’t been able to get it to work at all. It seems the only time you can help friends during quest lines is with boss fights. You can teleport to them during the fight, allowing you to participate, assuming the fight is in a separate loading area with its own waypoint. I’m not sure if this is by design, or a workaround I’ve discovered.

I could go on and on about the endless technical issues with the game, from my horse randomly disappearing, to being unable to unsheathe my weapons, to getting stuck at loading screens. However, there is one thing I think make or breaks game in a situation like this. How does support work when you’re stuck in these issues? As I’ve mentioned, they are patching regularly, so they’re clearly aware and rushing to catch up. However, one thing that is problematic is their communication. I’ll give you an example in the form of a screenshot my nephew sent me: 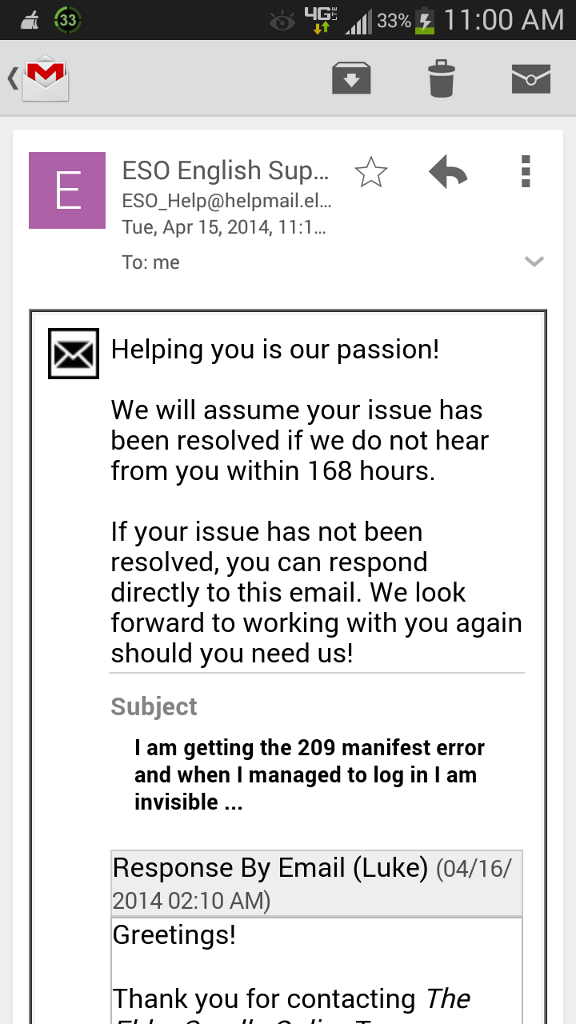 What’s so interesting about this? The fact that beyond an initial contact email, they never once contacted him or attempted to resolve the issue. My nephew has had connectivity issues since before launch and has opened cases on three separate occasions. He has not been contacted once. That email above is the first contact he has received from support and it is to tell him they intend to close the case because clearly his issue is fixed. Of course it isn’t, and they’d know that if they bothered to respond to his initial complaint.

I’ve checked around the forums and I’ve seen many other similar stories of people being ignored and cases simply being closed. No contact, no updates. This is quite frankly bad customer service. True, the support forums are obviously going to be filled with complaints, so they’re hardly a representative sample of all the cases opened. So perhaps we also need to look at it from another perspective.

Personally, I have only had a few cases submitted to support, all of them to report spammers, and all of them quickly replied to with assurances that action would be taken. So on my end, I can’t say I’ve had a negative experience with support, but then again, my issues have been largely minimal and for the larger ones I’ve figured out my own workarounds. That seems to be pretty common, with a pretty standard list of ways everyone seems to have worked out for getting around bugs. Mostly logging off and back on.

One thing to be noted also is that every major MMO launch has been plagued with similar issues to varying degrees. This one is definitely on the more problematic end of the spectrum, but it is not entirely out of reason, yet. The support issues are quite frankly to be expected to some degree as the overwhelming amount of issues do not allow for a personal touch That said even canned responses would be nice at this point. Maybe a link to a knowledge base article?

The developers have implemented a nifty feature on the forums known as the developer tracker, allowing you to see when they have responded to inquiries about issues on the forums. They seem to be somewhat active, so they aren’t really ignoring complaints as much as it feels sometimes.

The first big content update is being scheduled for the game Craglorn, an endgame area that looks very impressive. It’s always nice to see that the creators of your MMO aren’t sitting on their butts and have regular content planned. However, it’s hard not to feel that perhaps that development time might be better utilized getting the current content working.
[youtube http://www.youtube.com/watch?v=f4PddwLiYQs]

However, if you can overlook the technical issues, the game is really well designed. The world is massive. Looks and feels like Edler Scrolls. Character progression is well designed as are skills and abilities. Gameplay mechanics are fun and skill based as well as stat based. The dialogue is well written and fully voice acted, and usually voice acted well. The sights and sounds are beautiful and the game is just plain fun. Whether it’s solo, or in a group. Finding groups works pretty well or just running out and playing the game as if it were a regular Elder Scrolls game.

However, there’s also one key caveat that must be mentioned. I did not pay for the game I am playing. It is a review copy, with two free months of gameplay. I have not paid a single dime for the game beyond what I paid to purchase it for my nephew. Would I feel different if I had to pay $60 for the experience I’m getting. Somewhat. It’s hard not to feel like we’re still Beta testing this game for them. It’d definitely lot of what I’d expect from an Elder Scrolls games, with an extra helping of bugs. However, if you’re not an Elder Scrolls fan, that argument holds very little weight to buy what is essentially an unfinished game.