TVLine released an exclusive sneak peek at the Girl Meets Word logo that made little me from the 90’s squeal on the inside.

It’s clear to see that the logo borrows from it’s male predecessor, but is also infused with the snazziness of  the 2014 Disney kid, which gives us a clear indication of the direction of the much-anticipated reboot. Most importantly…the globe remains!

Here are the new and old logos side-by-side for your comparison pleasure: 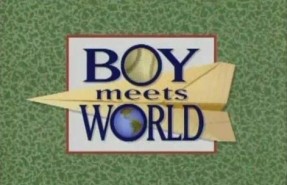 The official synopsis of the show is as follows:

Set in New York City, the new comedy series will tell the wonderfully funny, heartfelt stories that Boy Meets World is renowned for — only this time from a tween girl’s perspective — as the curious and bright 7th grader Riley and her quick-witted friend Maya (played by Sabrina Carpenter) embark on an unforgettable middle school experience.  But their plans for a carefree year will be adjusted slightly under the watchful eyes of Riley’s dad who’s also a faculty member — and their new History teacher — and Riley’s mom who owns a trendy after-school hangout that specializes in pudding.

The pilot has completed filming and cameos from old faves such as Harley Keiner, Minkus and  Mr. Feeny have all been confirmed.

Girl Meets World will air on The Disney Channel, and literally every duck is in a row for this highly anticipated reboot…save for a  premiere date.

We’d love to hear your thoughts on the new logo and any hopes/fears you may have for the series!

The 'Girl Meets World' Logo Is Here! (But Still No Premiere Date)