Every once in a while I’ll find myself addicted to an app on my phone. It’s usually one that provides me with quick and convenient satisfaction in a genre I love. Ridge Racer Slipstream happens to be that latest mobile addiction of mine, letting me quickly experience the racing sensation while on the go.

Like many of us, I have very little time for gaming during the day. So, I like to find games that provide me with an easy way to enjoy a few races, rounds – whatever – that last no more than 4-5 minutes. Ridge Racer Slipstream does this perfectly for me. It’s also a free-to-play app that uses a time system in the game when it comes to upgrading the vehicles. This isn’t a problem either. In fact, it works perfectly for me. The timing system comes into play only when upgrading the car. Players can spend the rare gold tokens to quickly upgrade their vehicle or wait 10-20 minutes before the new changes take effect. The good thing is that the car can still be used while waiting, so it doesn’t keep the player from enjoying a few laps during that time. Though I usually just put the phone away for that time until I find more time to play later in the day.

The game is very fair when it comes to the competition. It’s nicely balanced, keeping the player winning often. Things do become more difficult further on in the game, but the challenge is fantastic and fun. Also, I don’t feel I always need to upgrade my car to be able to win, at least at first. Players earn coins every race to use on upgrading their vehicle. These customizations include engine, control, increased nitro bars to fill, and other details with the appearance. 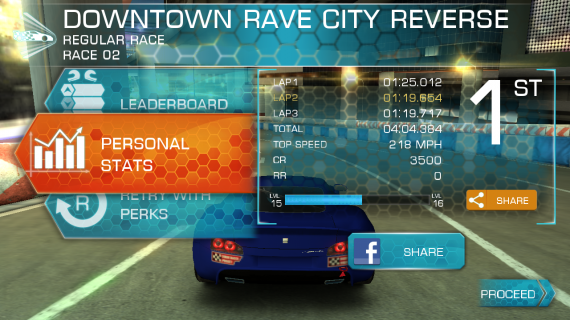 The complete satisfaction with the game comes with every race. It’s fast and feels good to control on the phone, the simple touch buttons are easy to use. I love drifting around the corners to increase my boost meter and then finding the right strategic time to use it on the track to win. Many times I’ve used the boost right at the ideal time to pass an opponent, beating them to the finish line by less than a second. This is the case many times as players won’t be blowing out opponents. It’s also fun to use the slipstream feature, which is when players follow behind other cars to increase their own speed. I know that this is common in racing games, but it just feels right in this arcade racer. Plus, when gaining speed through slipsteam and then unleashing a boost at the same time – woohoo! Things get fast!

The beginner’s circuit is enjoyable with some good tracks that look great. They do become a little old after a while as players visit the same tracks often. However, there are new tracks to experience as players unlock more tournaments to race in. There is a great and beautiful city track that features a nice jump, which I must say is mighty fun to experience for the first time, especially when timed right with a boost. (photo below) 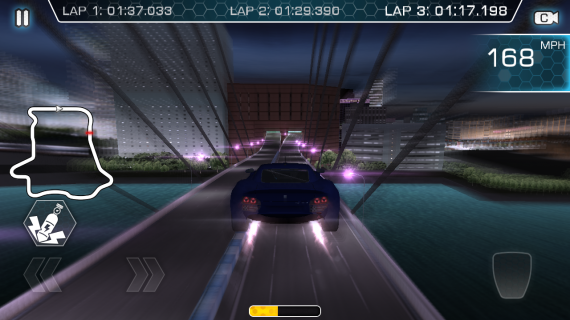 Ridge Racer Slipsteam has plenty of content for entertaining the player, especially if they’re just like me and can only find 5-10 minutes at a time to enjoy a few races. There are also bonus items that players can equip before beginning a race. These items include the following abilities: Allow players to increase their speed while slipstreaming behind an opponent, have a full boost at the start of the race, keep opponents from slipstreaming off the player, and make it so collisions don’t slow down the player as much.

Ridge Racer Slipstream is a lot of fun for some quick, on-the-go racing. It’s definitely an app I recommend mobile gamers and racing fans to check out.