The students at the Miskatonic School for Girls have it rough. Not only are they stuck at a boarding school, but the school is being run by a bunch of monsters. I mean real monsters. Like “giant slugs and crab people” monsters. It’s enough to drive anyone insane. Actually that’s kind of the point.

Miskatonic School for Girls may come in a box that seems way too big for a few cards and player boards, but everything looks great so I can’t really fault it that much. There are plenty of cards to play around with, some nice blood-red counters to use for tracking sanity, and four very nice boards (one for each potential player) to help organize your play area. It can be a bit awkward to use the provided sanity trackers at about the halfway point, though. There’s a fold in each board that makes it very difficult to place the counter; nothing a little space between the two middle numbers (to account for the fold in the board) couldn’t fix. There have also been some instances of cards curling up a little (mostly the Transfer Students and Substitute Teachers for some reason), but overall everything is in really good shape. 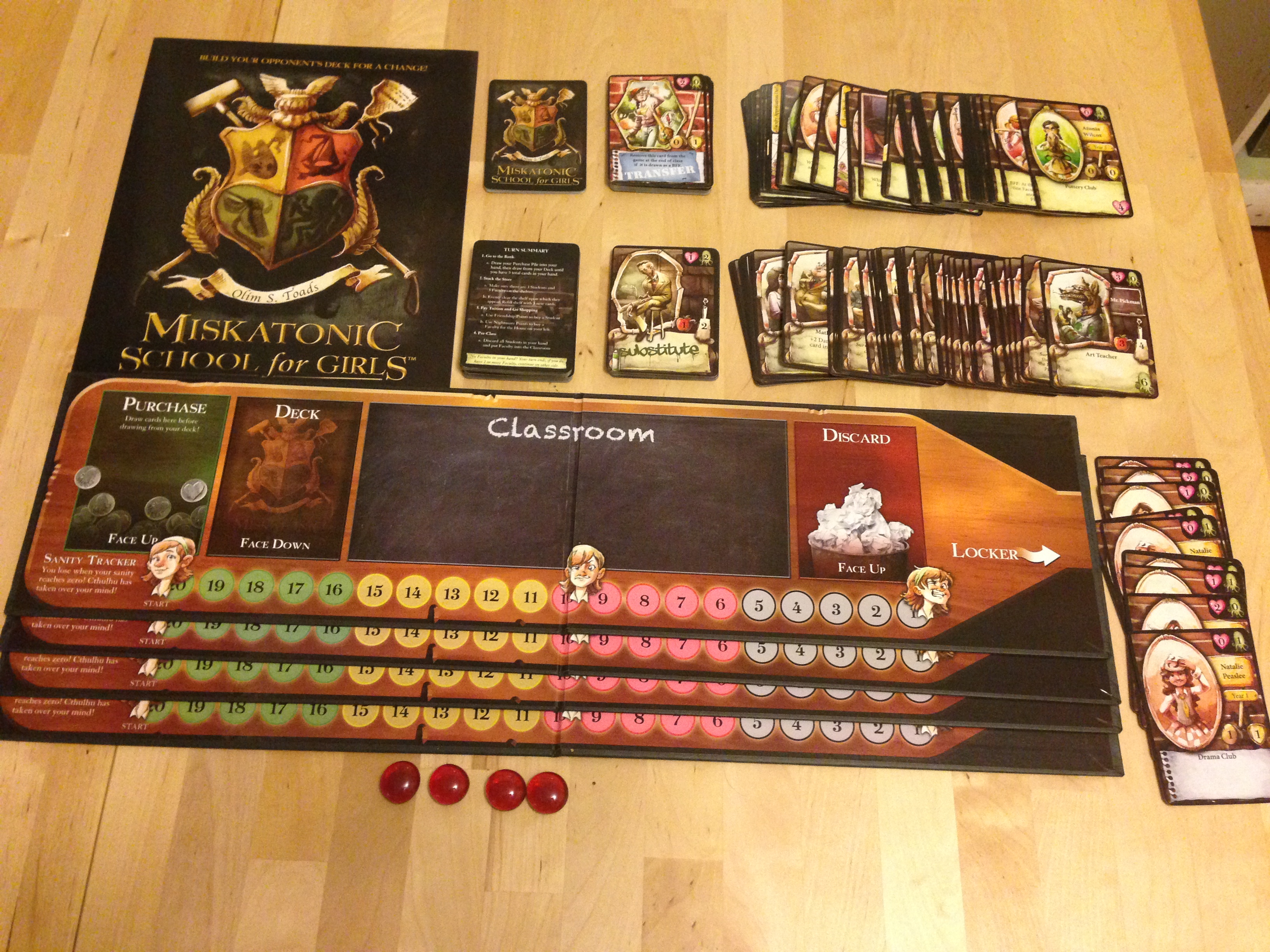 Then there are the illustrations, which totally steal the show. The cards all look fantastic across the board, but the teachers are particularly awesome. These Lovecraftian horrors (very poorly discussed as humans) are as twisted and horrific as they are hilarious. I’m especially fond of the bus driver – a large mass of tentacled green flesh with a gaping maw filled with spike-shaped teeth and an itty bitty bus driver hat on top. Although I do have to give credit to the look behind the third-year students: they’ve been around for too long, and the school has begun to “corrupt” them. Really I could spend hours just drinking in all the little details in the illustrations before even touching the game itself.

Sitting down and playing Miskatonic School for Girls is far from maddening, however. Friendship (hearts) and Nightmare (squids) points are used simultaneously on your turn to buy students for your house and faculty for your opponents. One of each must be bought, which is why the freebie Transfer Students and Substitutes are also available. They aren’t anywhere near as good (or bad), but at least they’re something. So it’s basically a deck-builder where you’re building up both your deck and your opponent’s deck at the same time. Only you’re trying to use the good cards on yourself and give the terrible ones to everybody else. And once you’re done buying cards you’ll have to deal with any teachers in your hand, which is where things start to get interesting. 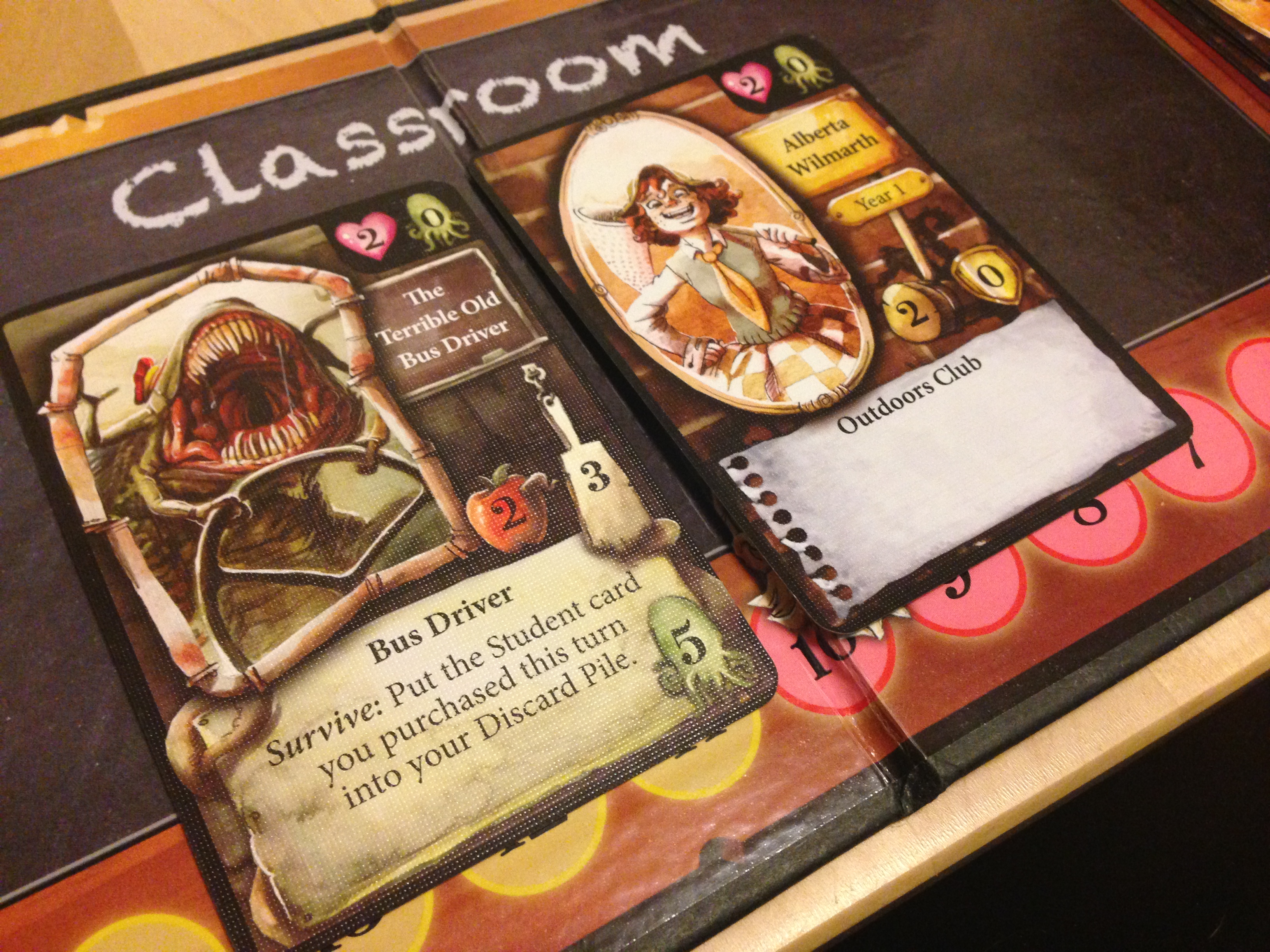 In order to battle any of the faculty, you must pull a student from your face-down draw pile. If they can best whatever monster you’re up against, you survive unscathed and put everything into your discard pile. If you fail, your house takes sanity damage (and usually some other really bad stuff) and everything goes into your discard pile. The last sane house wins, of course. There are ways to remove faculty from the game or pass them along to other players, but generally speaking you’re stuck with what you’ve got, which is a big part of why Miskatonic School for Girls works as well as it does. Because while player elimination is almost never fun, everyone is accumulating cards at the same overall pace. So eventually it comes to a point where everyone starts dropping like flies due to all the horrific monsters lurking in their class house. Even in a four player game with everyone starting at the maximum sanity level, the amount of time between eliminations was really, really small. In our last game I was knocked out first, and hadn’t even finished sorting my starting deck from everything else before a second player went down. And I wasn’t finished sorting his deck before a winner was declared. 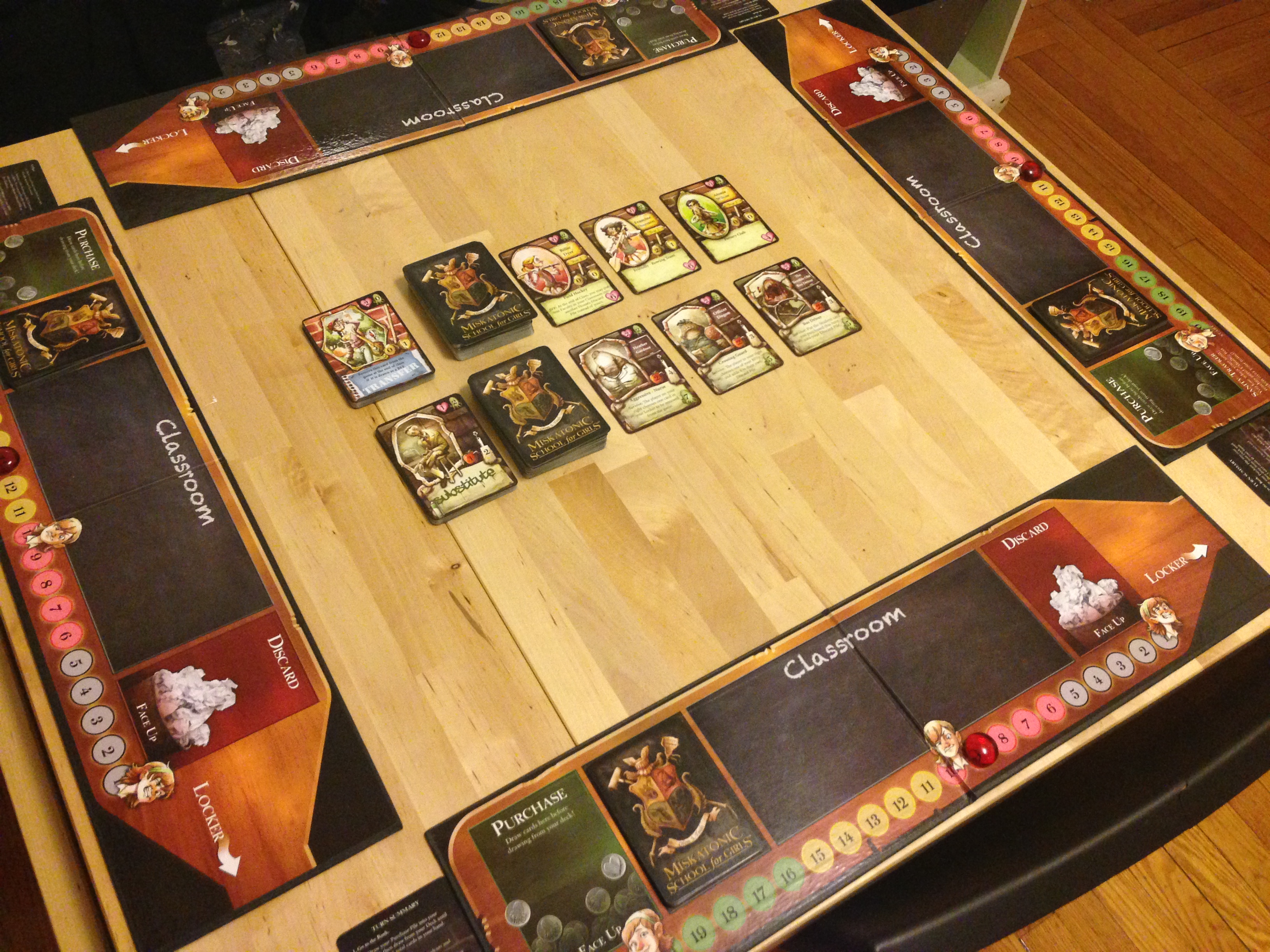 I’ve heard that many people take issue with the fact that Miskatonic School for Girls is a rather simple game, and I can’t really deny that claim. However, I don’t see this simplicity as a bad thing. It’s definitely not a deep and tactical game, but it’s really easy to learn and play. It’s also really funny and, most of all, fun. I think that, so long as you aren’t expecting a typical deck-builder or anything super-complex, you’re going to have a great time at Miskatonic. So much so that you may never want to leave…