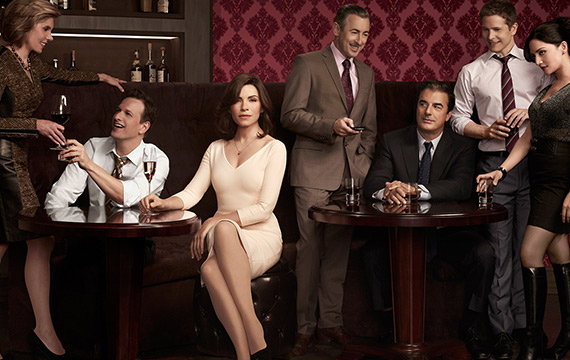 You could call this the “reunion” episode of The Good Wife. Should be future Emmy winner Josh Charles is back, directing the action, while Dylan Baker once again reprises his role as the show’s creepiest client, Colin Sweeney. The result is an installment that’s kind of like Clue, except without the three different endings.

Needing a very important signature on some merger paperwork, Alicia gets roped into Sweeney’s engagement party and stuck having to convince his equally bizarre fiancee Renata (played by Laura Benanti, previously seen as Det. Nick Amaro’s wife Marie on Law & Order: Special Victims Unit) to approve of said merger. Then she finds out he lied on his financial disclosure (“You can’t include sexual therapy as a business expense!” is probably one of the funniest lines ever aired on this show) And then there’s an apparent suicide – or perhaps murder – in the bathroom.

Renata is ultimately brought to trial for the murder, and of course Finn winds up prosecuting her, although he’s still uncomfortable in the courtroom given what happened the last time we saw him in one. His performance against Diane is the final straw in his fractious relationship with SA Castro (Michael Cerveris), who promptly tries to fire him before Finn reveals that he’s about to oppose Castro for his job, which makes it illegal to terminate him. Castro, in turn, goes running to Peter like the sycophant he is, but gets drop-kicked, bringing everything all together. Do you remember the subplot from season 2 of Fairly Legal where Justin Patrick ran for District Attorney against his equally unlikable boss? This is just like that, except unlike Fairly Legal, we’re going to get a chance to see how it ends.

“Tying The Knot” is definitely one of the quirkier episodes of The Good Wife, but underneath all that it’s really about the show getting back to its legal wranglings and continuing to push forward the development of Finn Polmar. On the latter count, we have to remember that there are only three more episodes left in the season after this one, so there’s a limited time for the show to sell its audience on Finn as a new leading member of the ensemble. So far, it’s doing a pretty good job, because Finn’s a sympathetic character getting screwed over by a boss it’s impossible not to dislike. When it comes to the former, well, this series always knows how to create legal drama at a good clip, second only to USA’s Suits in that department.

Since this episode is more than a little bit out there, it’s actually somewhat of a gift that Josh Charles has come back to direct it, because he’s sharp enough behind the camera to keep things from just going completely over the top. The way he directs the episode grounds it as much as possible. Here’s a thought: Charles has proven himself to be a great up-and-coming director, one that any TV series would gain from having. If he were amenable to it, why not keep him around to direct an episode or two in the future? Assuming he’d be amenable, he’d be working on a great series, and The Good Wife would add to its already impressive stable of recurring directors. Just food for thought.

Especially given how strong this year as a whole has been, this won’t go down as one of the season’s strongest or even most memorable chapters. Yet, as we say often around these parts, not every hour of television is meant to be epic. Some are just meant to be enjoyed in the moment, or to move the overall story along. This week, The Good Wife has done both, and continues to leave us happily anticipating the endgame for Season 5.

The Good Wife continues its fifth season next Sunday at 9 PM ET/PT on CBS.

<p>Brittany Frederick is an award-winning entertainment journalist, screenwriter and novelist. Since her career began at 15, she’s worked on her dream TV show in <em>Human Target</em>, met her hero Adam Levine at <em>The Voice</em>, collaborated with Magician of the Century Criss Angel, and encouraged vehicular mayhem on the set of <em>Top Gear</em>. You can follow her on Twitter (<a href="http://www.twitter.com/tvbrittanyf" rel="nofollow">@tvbrittanyf</a>) and visit her official site (<a href="http://www.brittany-frederick.com" rel="nofollow">brittany-frederick.com</a>).</p>

Jay Z and Beyonce Announce Summer 'On the Run' Tour