Ghost Recon Phantoms can be very addicting without having to spend a penny. It’s not the Ghost Recon I want, but it still gives me something to play by name. It basically fits right into the Future Soldier timeline with the number of unique devices that players have to use on the battlefield. This includes devices that cause players to become shaky and disoriented, not being able to see the approaching enemy. There is also a nearly invisible cloak for snipers to use, a shield for advancing soldiers, a beacon that reveals enemy locations, and more. These devices are fantastic to use and really make the gameplay exciting and entertaining.

Ghost Recon Phantoms is a heavy cover-based game that forces players to use it or die, mostly. The cover system, for the most part, is very player friendly throughout the game. Only on a few occasions have I found myself stuck on the wall, keeping me from dealing with a rushing enemy. Pretty much the entire game, and certainly the gunfights, is played while using the cover system. 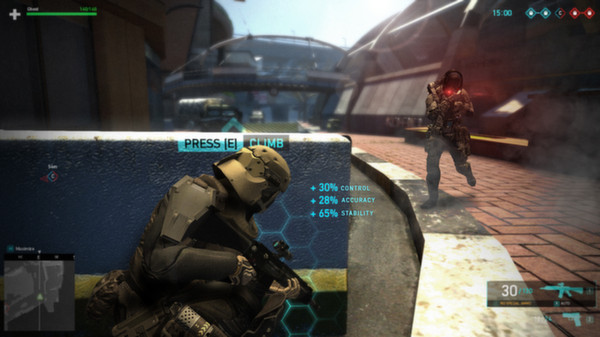 It’s a game of quick shooting, using wits, and making expert use of each wall. Snipers control zones fairly easily. Gunners are pretty much out of luck if they’re taking on a sniper from distance, as it should be. So it’s important that each team has snipers that can keep the other team’s snipers busy. Sniper fights are probably some of my favorite in this game. If a sniper is fixed on a player’s position, they need to be very smart about how they handle the situation without dying. Players can try coming out from cover very quick, for less than a second, to force the sniper to shoot, giving the player a chance to set up their sights while the sniper reloads. Another option is to peak out from the side instead of over the top. But my favorite of all is using the cloaking device to perfection so the sniper can’t see me unless they are paying very close attention.

Gunfights are similar with using cover. If someone is locked on the player’s position, they’ll need to be wise about how they approach the battle. Whether it’s moving over a few inches, using a device, tossing a grenade, or another method. It’s all very strategic. Players also have to be aware of other enemies eyeing their location, making it difficult to simply run out and around a corner to attack from the side. There are angles on certain corners for players to use if some enemies try to approach too quick, going a bit too far up. But it all comes down to team-work and strategy, and that’s what makes Ghost Recon Phantoms so much fun.

If players don’t have a good team around them, then they’re out of luck. I’ve been on teams where everyone is working for themselves, and that leads to a horrible beating. I’ve also been with players that know what they’re doing and work well together through communication and game smarts, creating good opportunities that can lead to victory.

While every first-person shooter needs good strategy and communication to do well, Phantoms is a game that absolutely requires it. It’s not a game where the best shot can always win it for the team. This requires teamwork. Ghost Recon Phantoms does this so well. I had many moments where it felt good to be playing Ghost Recon and working well together with teammates to secure a zone and advance forward to the next. This game does a nice job at capturing the need of communication and teamwork.

I find myself to really enjoy the maps in the game. They are big, but still not too big. They keep the target areas condensed, yet far enough away from each zone when it comes to respawning. Heck, some are pretty small and simple, yet just right for some good action.

Ghost Recon Phantoms is free-to-play, but I’ve poured over 25 hours into it and have done really well without spending a penny on the game. I may not have the best equipment, but I certainly do very well with what I have. I wish I could comment on how much better players are with having the higher priced items. Still, the important thing is that players can still have a good time without spending anything. Players also earn coins by playing, but it takes a while to earn enough to purchase some of the bigger guns or upgrades for already purchased equipment.

Also, for new players, they can enjoy the game without having to face the best players. Until players reach level 8 on any class, they’ll be playing with all level 7 players or under, making the competition more equal compared to those who have played a lot or purchased a lot of the best weaponry. 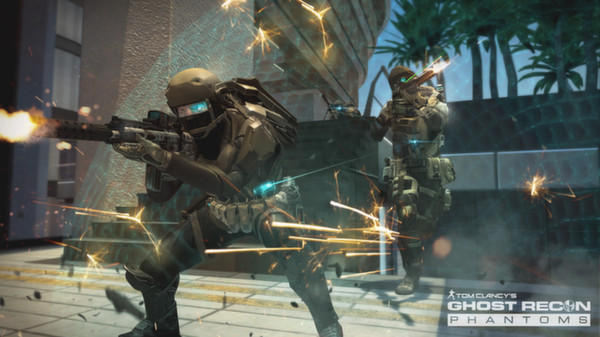 My one major complaint with the game is the time it takes to find a match. Once the game loads and players press the search for match button, it’ll take well over 2 minutes to find a match. Then it usually takes another minute to load the match. If it’s a game that’s just starting, once it’s done loading, there is a minute of pre-match practice. So, in all, it probably takes over 5 minutes just to get started in a match. Obviously, I’ve dealt with this for many sessions, so it’s not horrible. I usually make more coffee, find a snack, or check something on the TV while I wait. It’s just annoying though, I wish it would load matches a lot quicker.

Ghost Recon Phantoms still isn’t the Ghost Recon I’m waiting for, but it’s a nice option to have while waiting for the real deal sometime in the future. I would love to see something that really shows a lot of respect to the original Ghost Recon in terms of gameplay and atmosphere, but then add in some newer devices into that type of scenario. I don’t want to see anything like the Ghost Recon Future Soldier multiplayer when it comes to gameplay. Phantoms steps away from that type of gameplay just a little bit, using more of a cover dominate system and less of the super-run, wall-to-wall crap that went on in Future Soldier. However, even though I’ve had a good time with Phantoms and look forward to playing more, I’m still not a satisfied Ghost Recon fan.