A spinoff of the Ninja Gaiden series, Yaiba: Ninja Gaiden Z puts players in the role of a new protagonist. The titular main character, Yaiba, takes the spotlight this time around rather than the standard series hero, Ryu Hayabusa. The game starts off with Yaiba and Hayabusa in a fight, in which Yaiba gets killed. He is then reconstructed and vows for revenge, but now has to work under a somewhat eccentric man named Del Gonzo whom also wants Hayabusa eliminated. This forms a somewhat uneasy partnership.

Relaying information to Yaiba during the quest for vengeance is Miss Monday, who occasionally chimes in with some plot details or the occasional statement about the fight players are in. Now what if I said Yaiba: Ninja Gaiden Z is so short that these are pretty much the only important characters in the plot? Well there’s quite a few other things to be disappointed with Yaiba besides the game’s short length.

Yaiba has three main types of attacks to fight with; sword attacks, punching attacks (slower with more power), and flail attacks (they’re the weakest of the three but they cover a large range), and combos are strung together by pressing the three attack buttons in sequences. Via skilltree progression, players can unlock more combo options to use with these buttons. They can also use their dash button to move around mid combo, or to just dodge enemy attacks. Unlike most hack and slash games, the only time players can jump is when they dash off a ledge that allows for it, or they’re near an object that the game prompts them to jump on to start one of the game’s many platforming sequences. In these sequences players alternate between jumping and using their flail arm to grab handles and ledges (Which to be honest almost feels like they are in the game just to pad the length out a little more, they just feel tedious after a while). Even then, sometimes the jump command can be finicky on where it works, as some ledges required me to move Yaiba around a little to find the perfect spot to jump from, rather than anywhere on the ledge in the right direction like one would expect. As a result of this, anyone expecting any flashy air combos will not find those here. 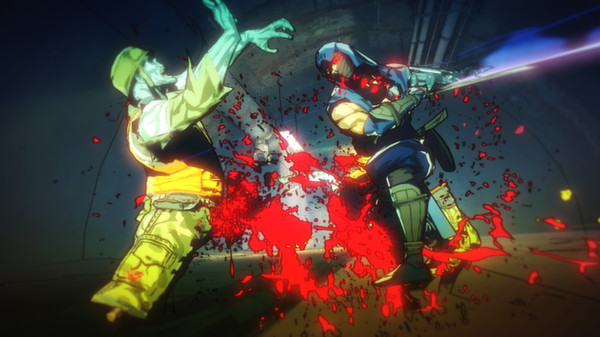 Speaking of flashy combos, that’s essentially all the combat has going for it. It looks flashy, but actually performing the combos doesn’t feel satisfying. Combat, most of the time, feels shallow and acts like broad strokes that cover a large radius. Even the shorter range punch attacks send players a far distance during the combo, most of the time, although slowly. On top of that, players can dash out of most attacks and just combo elsewhere, as mid-combo dashing covers a large distance. Zipping around the battlefield isn’t as fun when the combos themselves are basic and not really enjoyable. Sometimes the game will offer an occasional subweapon to pick up or rip out of stronger enemies (which can also get upgraded with the skilltree), but its uses are limited, and they feel even less satisfying to use since players can’t combo with most of them. Players also get access to a mode known as Bloodlust where Yaiba is completely invincible and his damage output increases. However, this takes a while to build up and doesn’t last very long considering how much work goes into filling the meter up.

For the most part, combat tends to be easy because the standard enemies don’t exactly have the best AI, though they are zombies so that’s to be expected to some degree. Near the end of the game they bump the difficulty a bit by eventually just sending waves of stronger enemies on players rather than just mix of a couple hordes with the basic grunts. At times these waves of stronger mooks are actually tougher than the large enemies, depending on whether or not the game decides to give players a subweapon (and if not, the player can just focus on a couple specific ones until they kill one, taking its subweapon to help them out). The enemy variety is pretty lacking, too. Players have standard zombies, some of which are elementally charged, and then there are those stronger enemies such as a zombie clown with cleavers, a fat fire-breathing zombie, an electric-charged zombie bride, a tackling zombie with large forearms, and an acid-spewing zombie. The game often throws all of these at players, so it won’t take long to have met the entire ensemble of mooks. Some of the boss fights also have a tendency of making it look like players are doing damage to them, almost having their healthbar depleted, only to then come to a pause in the fight where the health bar restore itself. Between that and bringing more enemies to fight in the big battle just makes the boss battles drag on for longer than they need to be. 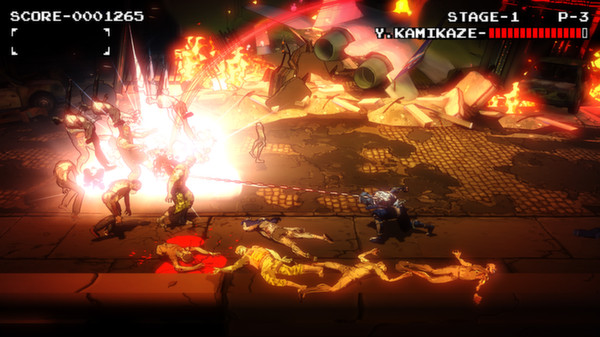 In addition to those problems, another issue rears its head in combat: the camera isn’t exactly that good. It even has problems outside of combat scenarios. At times the camera can’t make up its mind as to whether it should be right on the player’s back and over the shoulder or if it should be very high up in the sky at a distance to cover the entire area. There is an option to adjust the camera, but even then it’s just a setting of far-off versus close-up. In battles with larger enemies, the camera doesn’t even rotate for players in case they get behind the enemy. Instead it projects an orange hologram image of the player through the boss, which doesn’t really help in some cases since it doesn’t show the depth of the player’s location in the background.

To mix up the gameplay variety a little, once in a while players have to grab zombies and place them in certain objects. Whether it be throwing a zombie in a truck to have it drive off and cause an explosion, placing an electric zombie into a generator to power up a device, or throwing an acid zombie to jam up some fans to destroy them and advance. These portions of the game, like the jumping segments before them, simply feel like they’re in the game to pad out the length. There’s little to no thought involved with getting these to work and they happen a lot in the game. They just feel like a chore after a while. 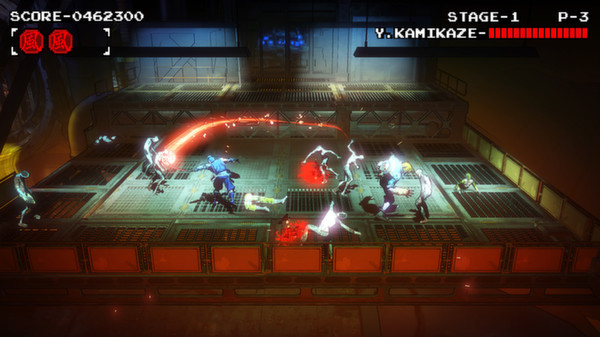 Ultimately, the game is a case of trying to make something larger out of something that’s really short, and it’s not very enjoyable at the key parts either. Yaiba: Ninja Gaiden z could have easily been its own separate game since Ryu doesn’t play a large part in this title. Yaiba wanting revenge on Hayabusa is one of the only ties this game has to the Ninja Gaiden series, so if players are looking for another good game in the series, look elsewhere. Then again, that statement implies this is a good game to begin with, let alone a good Ninja Gaiden game. Honestly, players are better off passing on this game.