Home » Gaming » Board Games » Space Hulk: Death Angel – The Card Game Review — They Are Upon Us

First an explanation: Space Hulk is a currently out-of print board game set in the Warhammer 40K universe in which one player controls a squad of Blood Angel Terminators (space marines) as they attempt to complete a series of missions on a massive derelict space vessel, while the other player controls the Genestealers (nasty aliens) and try to kill the space marines dead, dead, dead. Space Hulk: Death Angel – The Card Game is sort of a distillation of that concept that removes the competition and adds co-op, while also using nothing but cards, dice, and a few tokens. It’s not as impressive to look at as Space Hulk what with the lack of detailed miniatures and a modular board that depicts the bleak environment, but it’s every bit as entertaining. It’s also brutally difficult.

There are a total of six different squads of two marines each. The number of squads used in a game will vary depending on how many players there are – anywhere from three for a single player to all six for a full compliment of six players. These squads are shuffled and lined up in the center of the table. Special room cards go at the top of the “formation” to indicate the current location of the team. These cards will also indicate where special terrain cards (locations where the Genestealers can spawn) will be placed, how many Genestealers will spawn when events are drawn, and usually also include some added curveball like being able to risk the wellbeing of the marines in order to kill several of the nasty critters all at once. 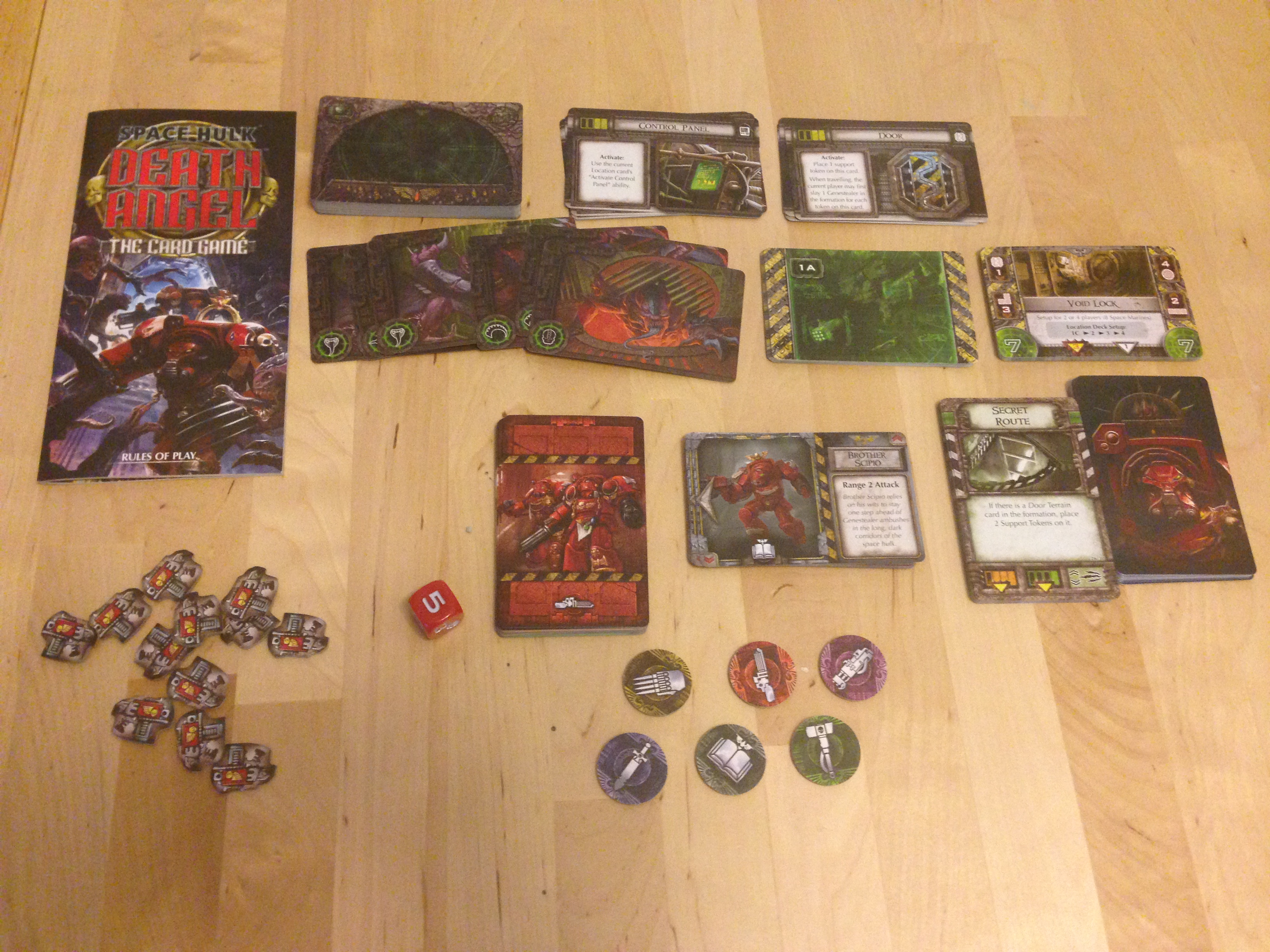 What’s really cool about all of this is how these cards manage to convey the idea of bulky Terminators walking through the cramped corridors of a space ship on a more-or-less suicidal mission. Each marine’s card has an arrow that indicates his facing, and that in-turn will determine whether or not he can actually attack something. Movement (i.e. sliding a marine’s card up or down in the formation) is also slow and methodical. And the game is never as easy as it is on that first turn. Without some proper teamwork and a little luck you’ll all find yourselves in an even more hopeless situation.

The randomness of the setup, coupled with the sizable deck of Event cards, ensures that no two games are exactly alike. One game may have you walking through the Teleportarium where you stumble upon a squad member you thought was dead, while another takes you into the Toxin Pumping Station absolutely crawling with Genestealers. It also means that every time you change floors you’ll never know quite what to expect. You could take multiple turns to position one marine in a good spot, only to have a swarm change position and make him completely useless. Or someone could complete whatever task is required to proceed to the next floor, then suddenly there are Genestealers on every side. There’s no way to plan for every eventuality, which is what makes the game so freaking difficult but also extremely replayable. 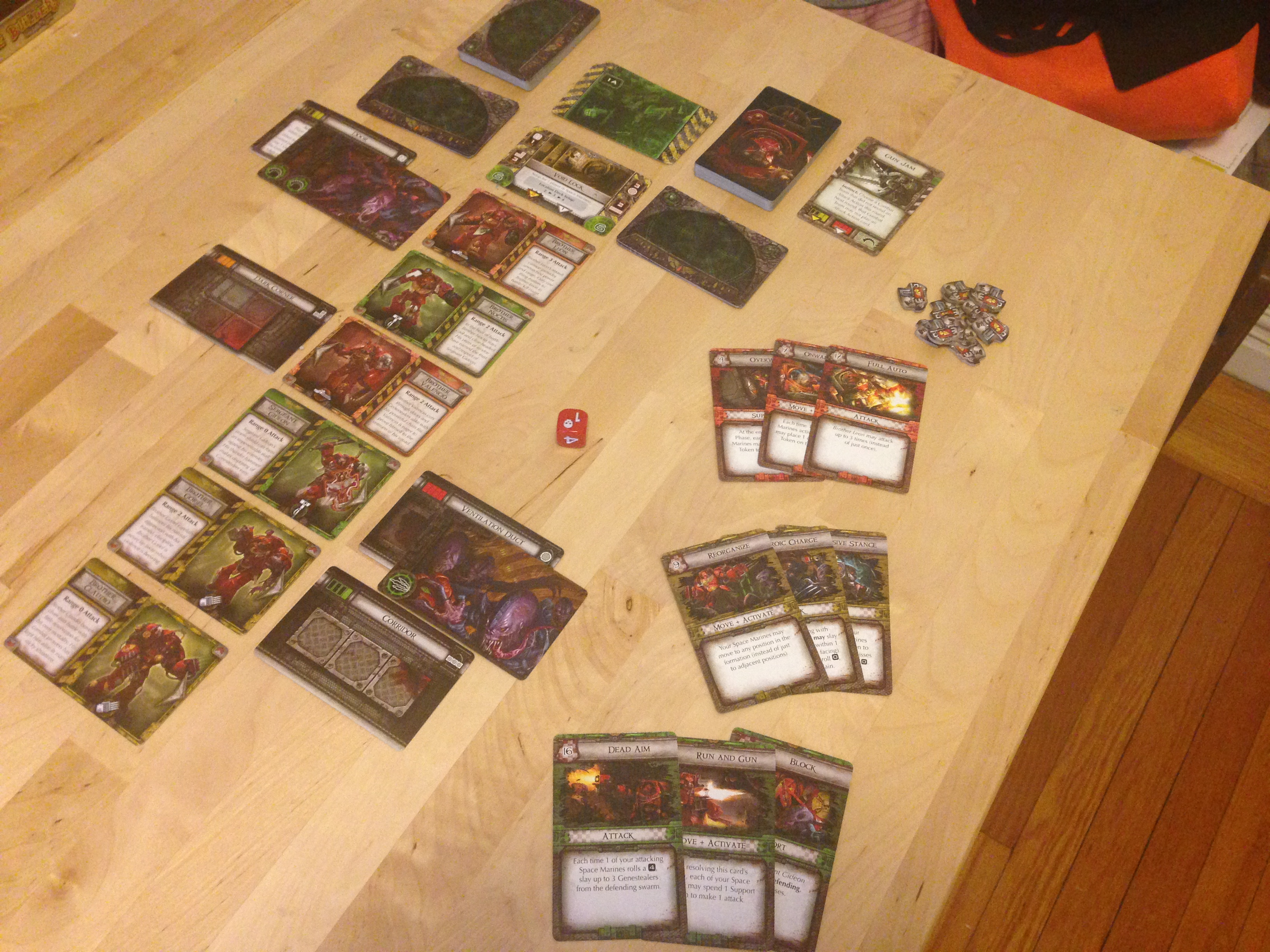 Being able to play solo is also a huge plus. I don’t talk about it much but I really love it when games have a solo option because that means I won’t always have to wait for other people to be around and interested in order to play. And playing Death Angel by yourself is pretty much the same as playing with a group – with less personal interaction, of course. It’s also a bit easier, if you can believe that. You’ll still find yourself going up against larger and larger Genestealer swarms and having to make some extremely tough decisions when it comes to who you’re willing to put at risk, but the game is structured so that more marines equals more Genestealers spawning. And the more Genestealers there are the easier it’s going to be for them to cut your marines to ribbons.

Of course all of these intricate details also means that Death Angel can take some time to learn. There are useful icons on most of the cards to make figuring out what to do much easier, but actually knowing when to refer to said icons can be difficult for newcomers. Likewise, many of the basic rules can be a bit tough to digest, let alone remember in a pinch. Once you’ve played a few games the rules really aren’t that difficult to keep track of, and as I’ve said most of what you have to do is written right on the cards, but first-timers should expect a rough start. 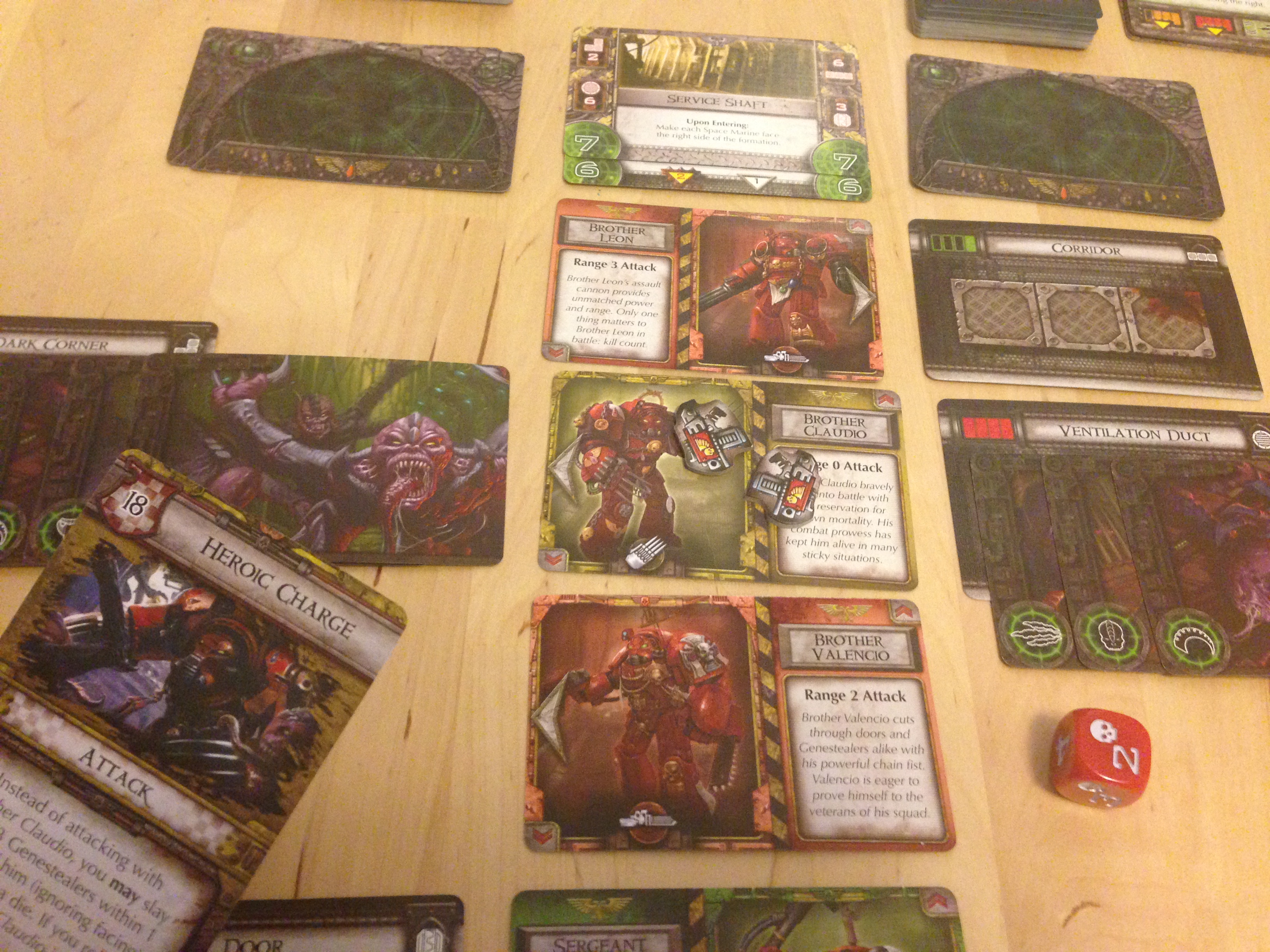 Even though Death Angel is extremely brutal and unforgiving, I can’t help but love it. This tiny box of cards tends to generate more panic, tension, and elation than most video games. And it’s just a bunch of cards! If you’re looking for an intense co-operative game that doesn’t pull any punches (and you don’t mind rule pondering), Death Angel is definitely worth considering.

Space Hulk: Death Angel - The Card Game Review -- They Are Upon Us