Home » Gaming » Board Games » The Builders: Middle Ages Review – Don’t like simple games? Build a bridge and get over it.

Building something, while incredibly satisfying and essential to society, can be something of an exhausting, mind-numbing drag bogged down by permits and weight ratios. That’s why it’s so impressive that The Builders: Middle Ages manages to streamline the process down to something that’s both incredibly simple and incredibly fun. It’s the kind of game you’ll want to break out whenever you have a spare 10 or 15 minutes, and it’s the kind of game you can break out because it’s both easy to tote around and extremely accessible.

The Builders: Middle Ages come packed with worker cards, some much larger project cards, and a handful of these nice little plastic coins. It’s an super-easy to sort and it fits inside a tin that almost small enough to fit in your pocket. Almost. You could still carry it around pretty easily, though. Setup is also really quick and easy as the two types of cards are two different sizes, which means it takes all of a second to separate them. A little more prep is involved when it comes to fishing out Apprentices and shuffling the decks, but I’d be shocked if it took the average player more than a few minutes to get everything ready. 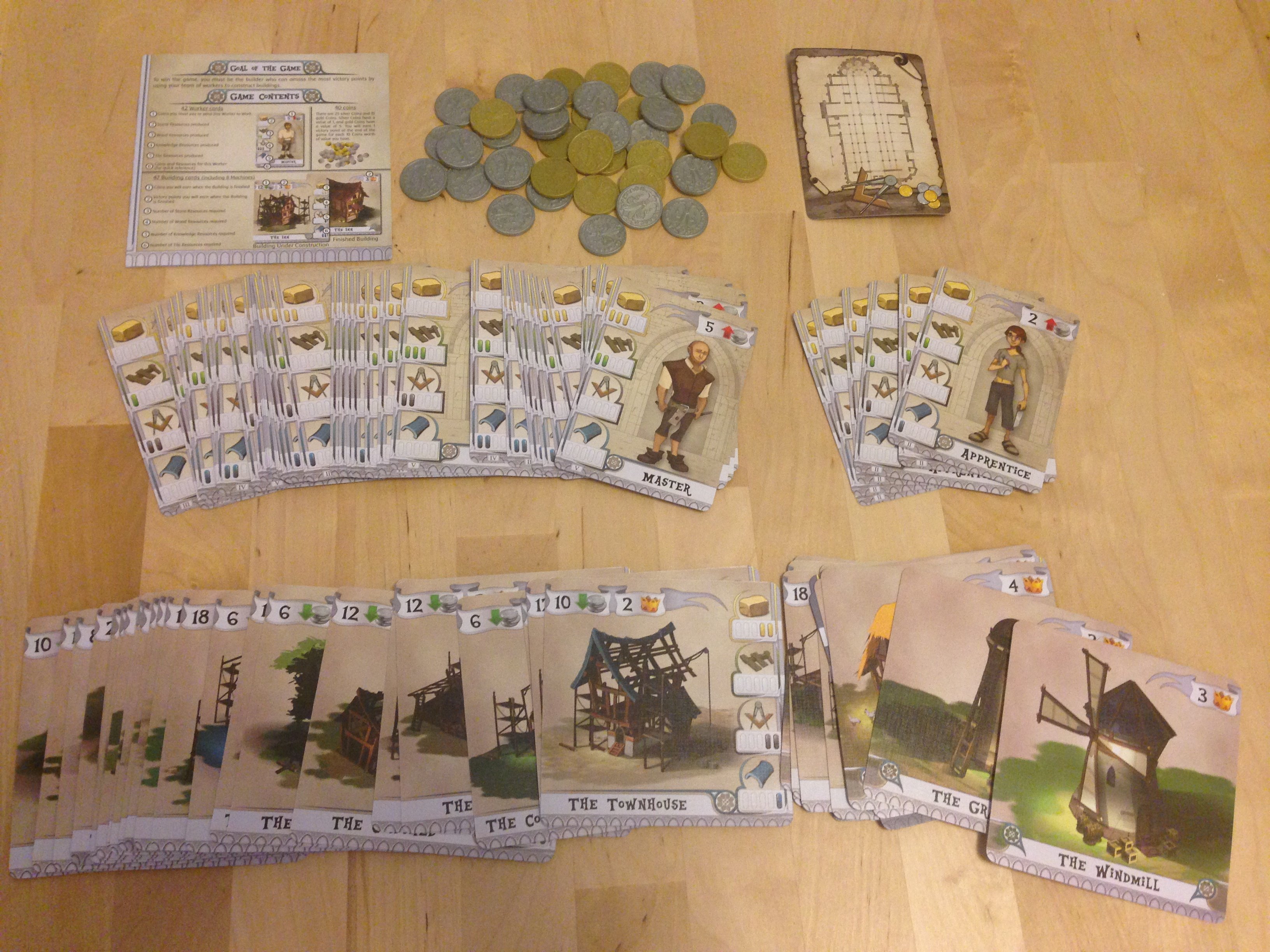 It’s almost as easy to play The Builders: Middle Ages as it is to get it on the table in the first place. Each player starts the game with one Apprentice card and ten “dollars” worth of coins. In the center of the table are two piles – one for Workers and one for Projects – with a lineup of five cards each. Off to the side is the Bank, where all the extra coins sit. Each turn allows players to take up to three actions, in any order and in any combination: take a Worker, take a Project, assign a Worker to a Project, or trade in actions for money. The overall goal is to earn the most points at the end of the game (triggered when any player hits 17 points), but how you do that is entirely up to you. 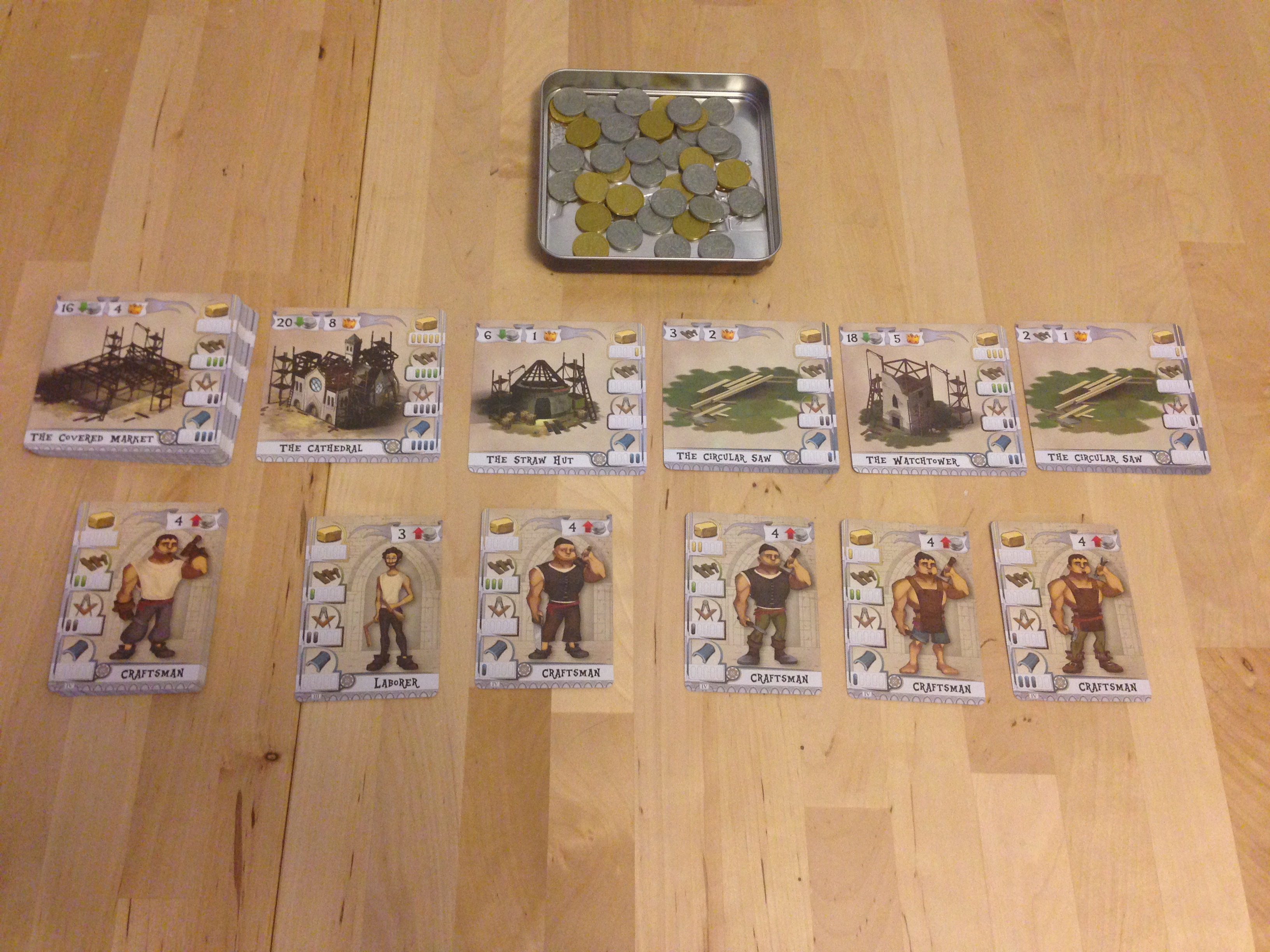 Every Worker produces a specific kind and number of resources, indicated on their card. And each project requires a specific number and kinds of resources to be completed. Simply assign a number of workers to the project until you have enough resources on-hand and you’re done! Then you get to flip the project over to its completed side, rake in some cash, and collect points. The catch is that, while it won’t cost you anything but one of your three actions to grab a Worker from the pool, you will have to pay them when you assign them to a project – in addition to the separate action required to assign them in the first place, of course. What this means is that you’ll need to be smart about the projects you take and the workers you hire. For example, don’t use two $3 Workers for a total of four stones when you have one $4 Worker that produces the same amount.

There isn’t a crazy amount of strategy to The Builders: Middle Ages, but it definitely pays to be economical. Sometimes you’ll want to grab a project before someone else does because you already have a good selection of workers for it, even if some of them might already be working on something – once the project is completed they’ll be free to use once more. Maybe you should consider building a tool rather than a house, because while tools don’t earn you any money upon completion they can be assigned to projects like a worker and won’t cost you anything. 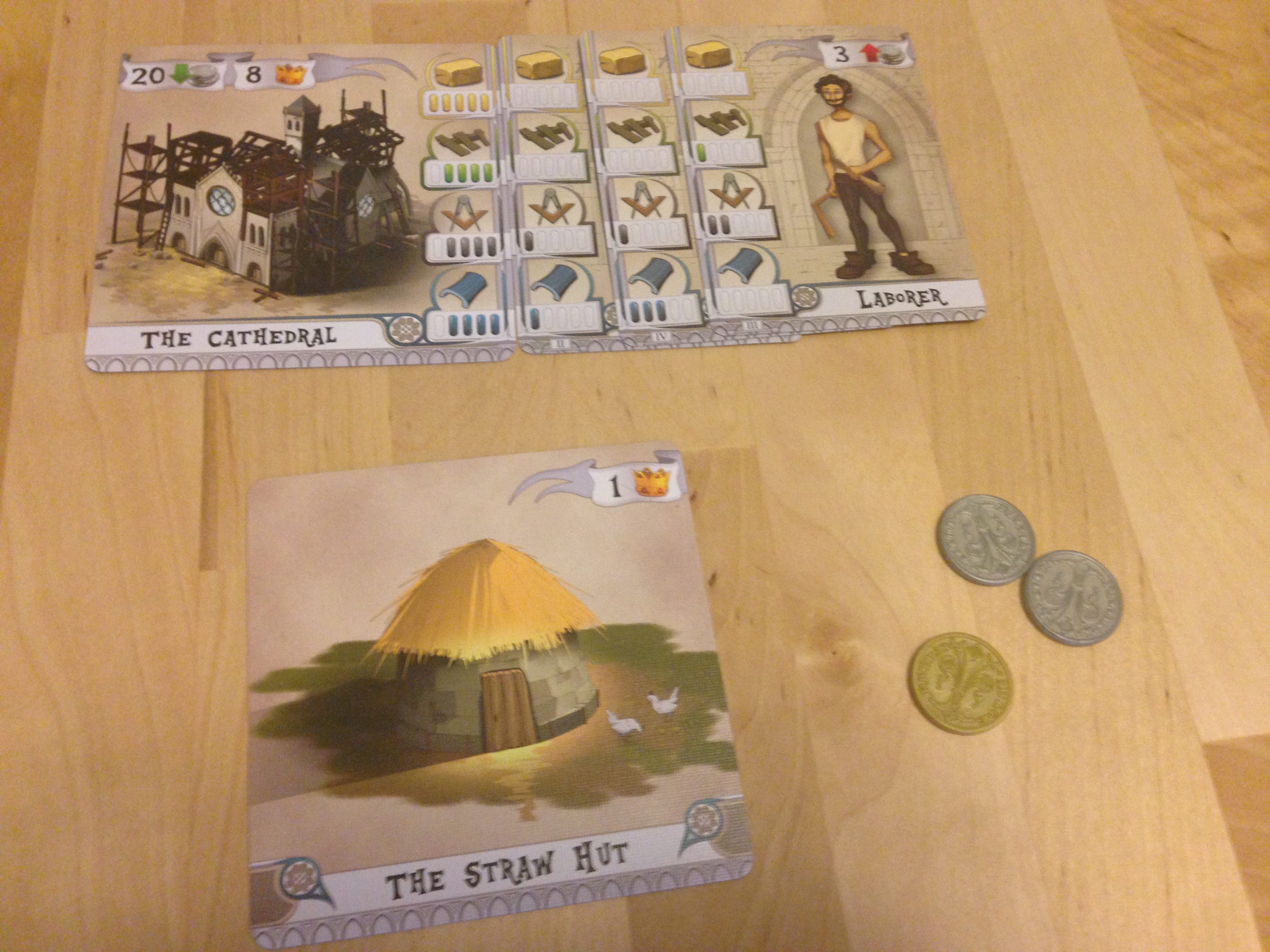 The Builders: Middle Ages is the kind of game you can bring out to entertain your hardcore gaming friends in-between larger games, but thanks to its accessibility it’s just as much fun with a group of non-gamers. Setup is fast, teaching it is fast, playing it is fast (and fun!), and it takes up about as much space as a large wallet. If you’re in the market for an excellent “quick” game, or even if you’re just looking for something fun, this should definitely be on your radar.

The Builders: Middle Ages Review - Don’t like simple games? Build a bridge and get over it.