Mage Knight is the kind of game that will probably terrify newcomers the moment they open the box. It comes absolutely packed with components: cards, miniatures, cards, tiles, cards, hexagonal map pieces, cards, tokens, cards, dice, cards, more tokens, even more cards, and lastly, cards. This is a very “What the heck have I gotten myself into” kind of game. It’s also a game where you can storm an enemy stronghold with the help of powerful mages that are under your command, order golems to defend you from a dragon long enough to power up a devastating spell, explore the depths of a dungeon all by your lonesome in the hopes of acquiring some fancy items, or even burn a helpful monastery to the ground and steal the artifact it’s protecting if that’s what you’re into. It tracks your reputation (good and bad) and allows you to level-up for goodness sake!

In short: this game is as incredible as it is intimidating. 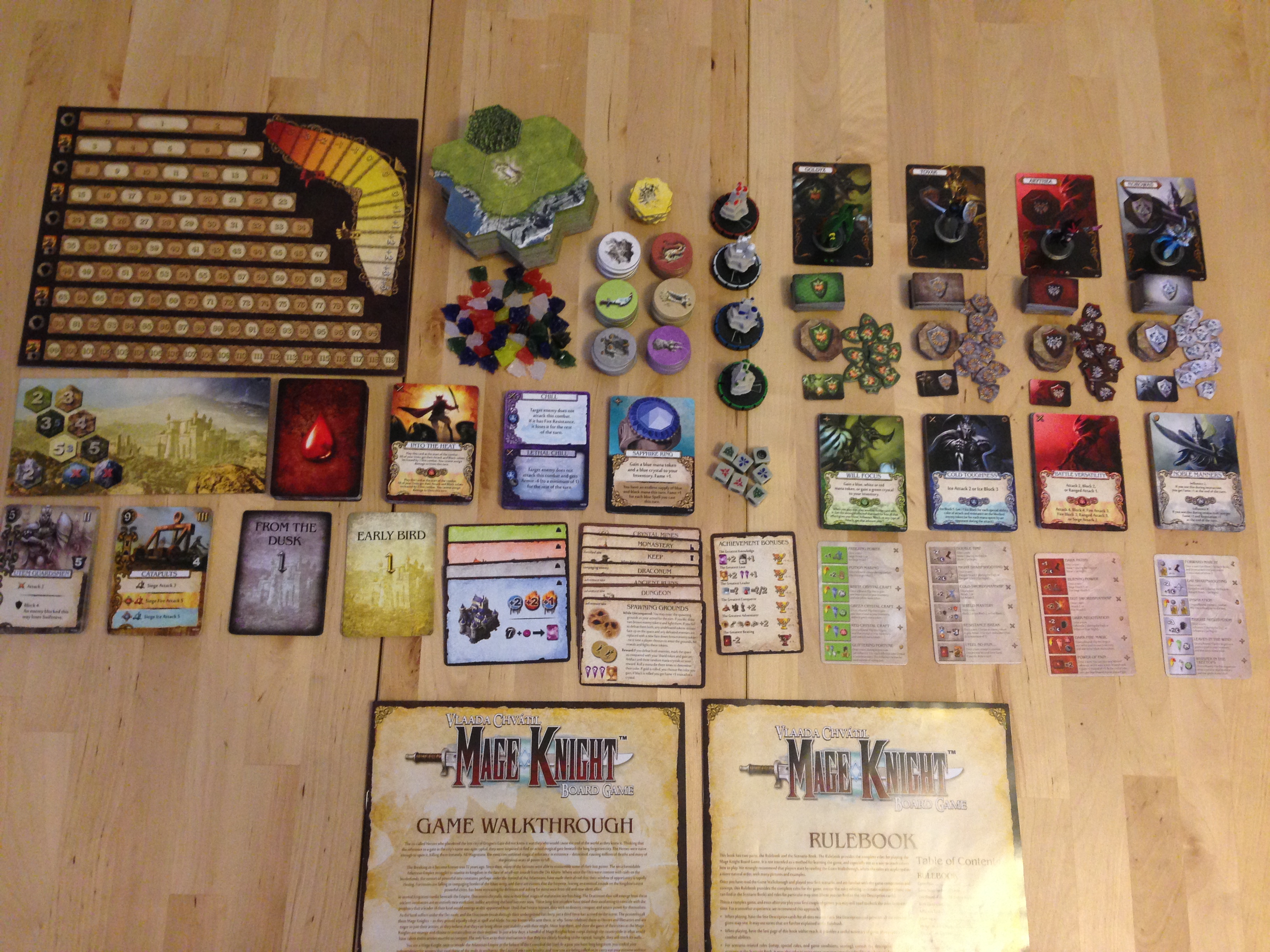 When I say it comes with a lot of components, I mean it comes with a lot of components. There are multiple kinds of tokens for random enemy encounters, cards that players use to determine turn order as well as potential strategies and innate abilities for a turn, dice used to create a shared Mana pool, cards for advanced actions and spells, a board that tracks character levels and reputation, cards for artifacts and units you can hire, individual character tokens for marking accomplishments, cards for each individual characters’ starting deck, city miniatures, character miniatures, and a whole lot more. Everything is pretty well made to boot, which is impressive in its own right – even the miniatures are pre-painted. The only problem is that the inner packaging isn’t great for organization or speedy unpacking/repacking. With so many individual character bits and various types of cards, you’ll probably want to figure a better solution out quickly.

The rules of Mage Knight are a bit to intricate to explain in detail, but I will say that they aren’t quite as scary as they first seem. Many of the game’s mechanics feed into others, and a lot of the important information is readily displayed on cards and tokens. For example, all of the Action cards are used for things like movement, attacking, blocking, and generating influence to hire followers. Each card has a basic value, as well as a higher value that can be unlocked by burning some of your limited Mana resources. Conversely, you can also “boost” an action by adding more cards that are turned sideways. So if you really need help blocking an attack from a gorgon and you don’t have enough Block, you can add movements/influence/etc cards to it in order to increase the value. It lends an interesting bit of strategy to each turn as used cards aren’t reshuffled until the start of the following round – which means if you burn all your Movement cards early you’ll have to sacrifice other cards to get anywhere during future turns. 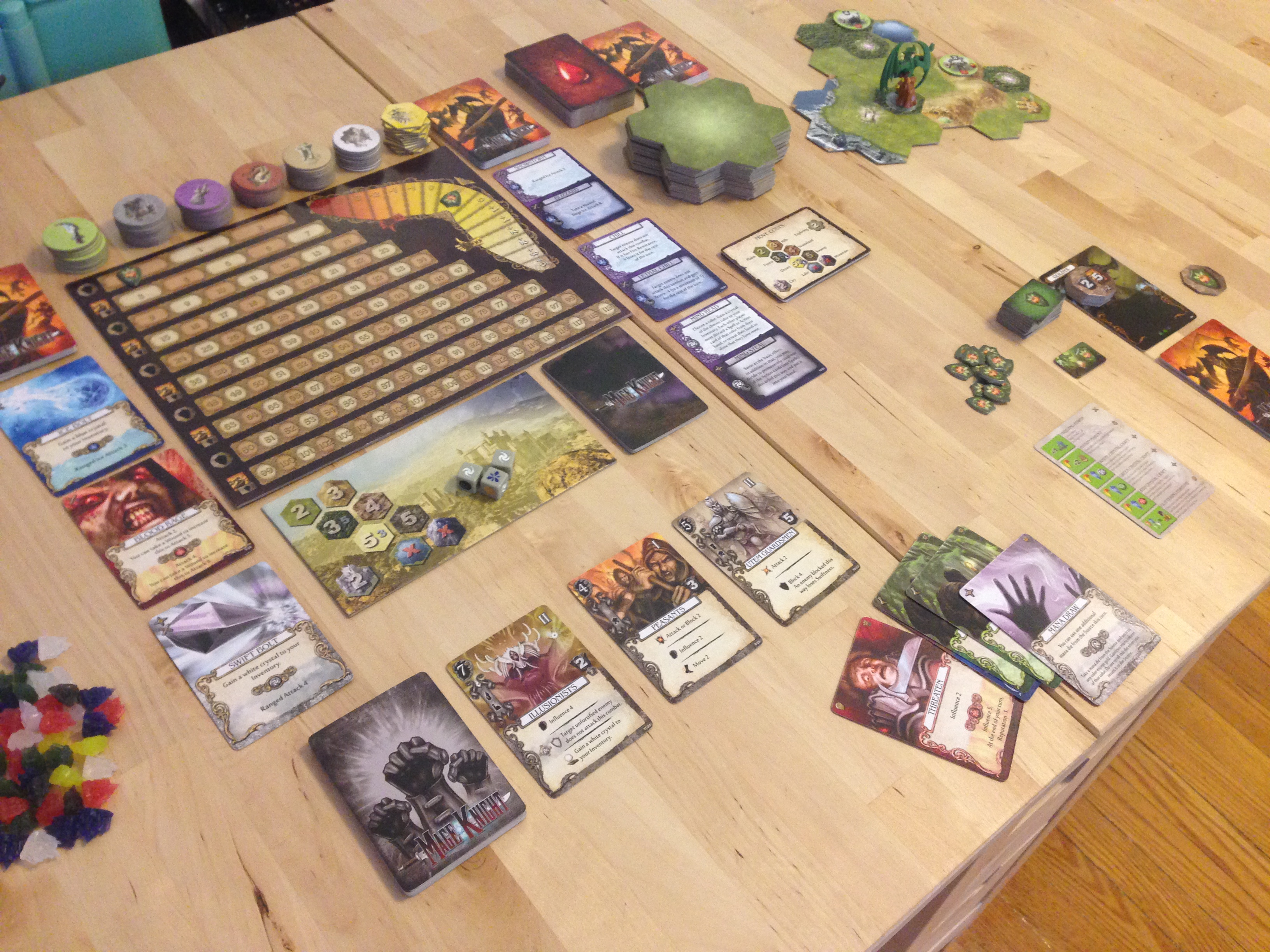 Mage Knight is full of fascinating mechanics like that. I especially like the Wound system (I don’t really like Wounds, but I think it’s a clever idea), in which you add a special card to your hand that can’t be discarded or used for anything – all it does is take up space and limit your overall maximum hand. In other words the more injured your charter becomes, the fewer useable cards you have available. It seems so simple but it does an amazing job of conveying the idea of character damage in a game that’s about 60% deck building. Don’t fret about it too much, though. You can use healing abilities to remove Wound cards from your hand and deck. The problem with all of this is that there are so many mechanics it can start to feel overwhelming to new players. Heck, even those familiar with the game will still need to refer back to the manual from time to time (“What does this enemy ability symbol mean again? It does WHAT??”). It starts to bog down the game a little, honestly. Not that you can’t power through it or eventually start to memorize the various ins and outs, but there are a lot of ins and outs to keep track of at any given time.

There’s so much variation to a game of Mage Knight it’s hard not to get swept up in it. Multiple scenarios are available that support one to four players, with indirect co-op and actual versus modes also available. And within each of these scenarios are even more possibilities that include random map layouts, random enemy encounters, random resource availability, and of course the whole deck building thing. Although you might want to avoid games with more than two players if possible, because things really start to drag with three or more people on the board. There’s just too much downtime between turns. Even if everyone plans their next turn in advance while everyone else is going (like the manual suggests) it can still take a while to cycle back around. Getting around the map also becomes a problem because any players who fall behind will have to burn through all their cards if they want to catch up and get in on some of the action. 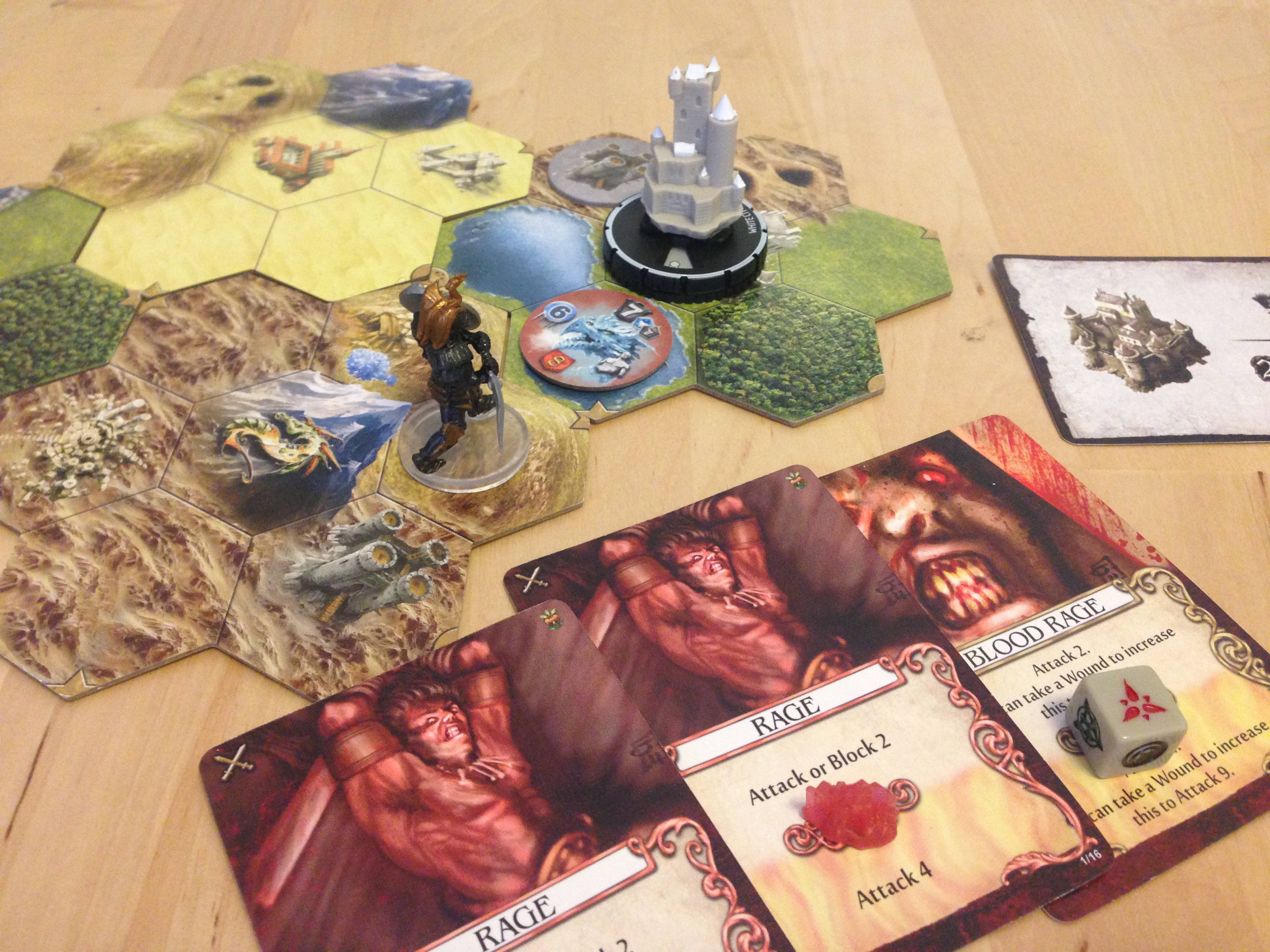 Mage Knight with one to two players is phenomenal, however. It’s a little persnickety with all the rules and other minutiae, but the adventures you’ll experience make it totally worth the trouble – especially if you stick with a smaller group.