According to Nintendo World Report’s live blog of  Nintendo’s closed doors roundtable, some additional characters for the new Super Smash Bros. game have been confirmed. The first of these is Pac-Man, Namco’s longtime mascot and gaming legend. From observations documented from the roundtable event, as well as his official trailer, Pac-Man normally is in his Pac-Man World appearance, but can also turn into his older classic self. He’s capable of throwing fruit, eating pac-dots, and even has a fire hydrant based attack. He also seems to have references to other classic Namco properties in his moveset, for good measure. The end result is what looks like a fun new addition to the roster. Mr. Game & Watch, a series veteran since Super Smash Bros. Melee, has also been confirmed to return.

Also confirmed is the ability to select various moves for each character’s specials. Each special has three variations. Specifically cited is that Mario has 3 fireball types; “…a fireball, a fast fireball, and a fire orb.” Palutena is a special case however, as her three options are all unique attacks. These customization options cannot be used in the game’s For Glory (ranked match) mode. Characters can also equip items to alter stats, but it works on a positive/negative system. Miis have special clothing options, but you can only play as Miis online in friend matches. In terms of systems, the characters will be the exact same, and you can use your customized characters on both platforms. 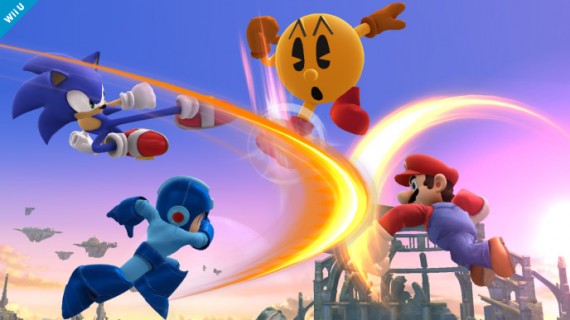 Are you excited about the addition of Pac-Man? Which other classic characters would you like to see join the fray? Let us know in the comments.