Once upon a time I was something of a Star Trek fan. Not the the level of learning to speak Klingon or anything, but I enjoyed taking part in the adventures of the various Enterprise vessels and their crews. So discovering a game like Star Explorer that basically puts me in the captain’s chair of the U.S.S. So Not The Enterprise But It’s Totally The Enterprise has me particularly excited.

Please note that the version of Star Explorer I own and have played is actually a print-to-order reprint from Goblinoid Games, so it may not be entirely indicative of the older (and no doubt pricier) version. The box isn’t official, but rather a generic square from The Game Crafter. The map comes in two folded pieces, and the crease in each of them creates a problematic peak in the middle of the play area for pieces to slide down (I ended up cutting along these folds so that the map was in four pieces, in order to eliminate the “bump”). All the tokens for the different player ships/crews, enemies, encounters, etc come in solid sheets that need to be cut out, and unfortunately my copy was actually missing all the “Damage Control” tokens for all four player colors. The rulebook is just loose sheets of paper that aren’t even stapled together, important information on one of the encounter tables is missing, and the all-important player stat-tracking sheets need to be photocopied if you plan on playing anything other than a solo game.

In short, it’s not the best packaging and the presentation is extremely barebones. 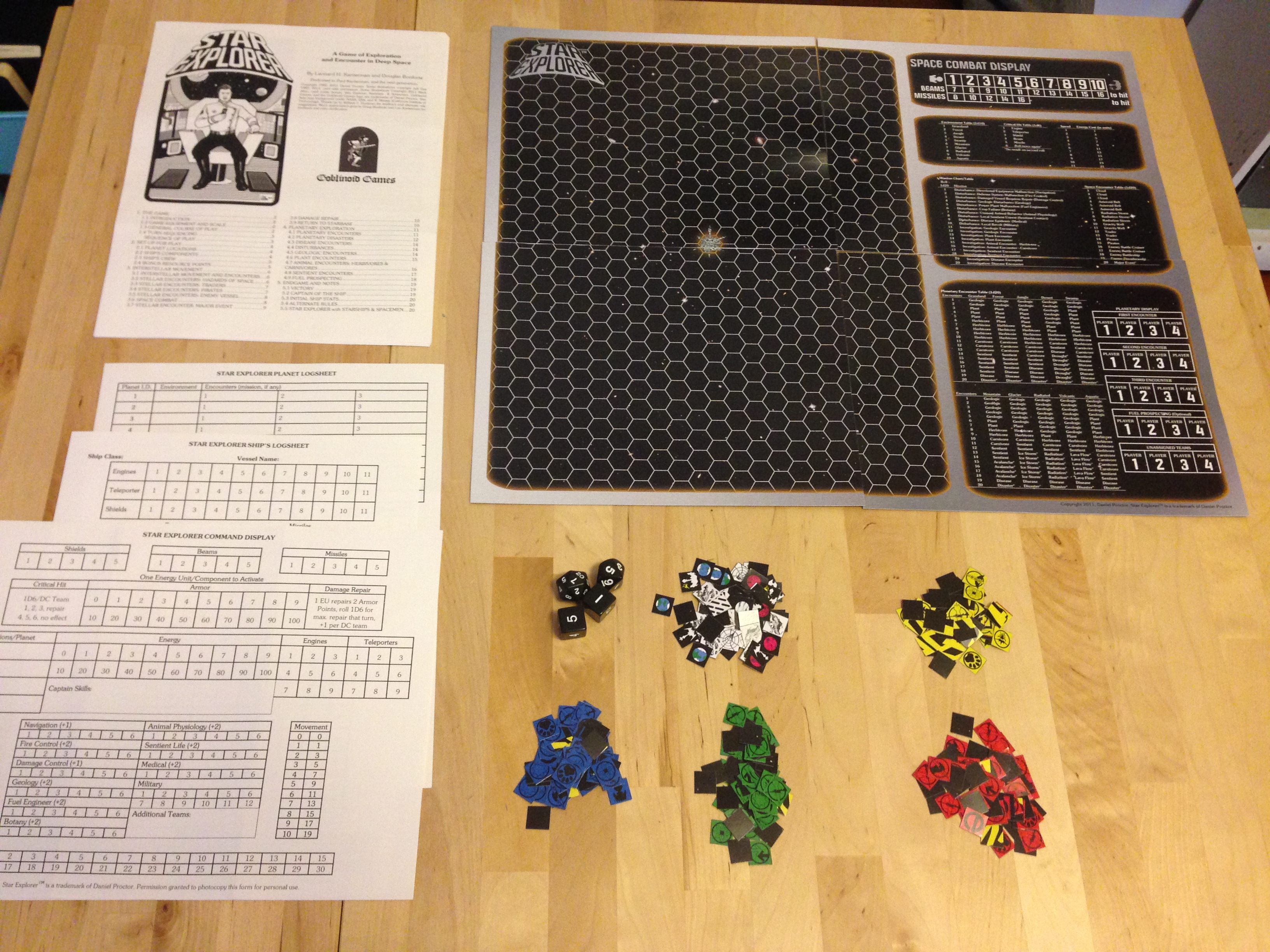 However, to judge Star Explorer entirely by its components would be a huge mistake. While it’s not much of a looker and the cutout tokens are difficult to sort and to move without shifting everything else around, the adventures it creates for you are exceptional. Every single game is like playing a season of Gene Roddenberry’s iconic sci-fi series.

The overall goal is to set out from the StarBase and explore four (or more/fewer if you desire) randomly located planets. You’ll need to reach them, possibly deal with random space encounters, deal with the various encounters and missions that take place (also randomly assigned), then make it back to base. Within 20 turns. And not die or run out of fuel. 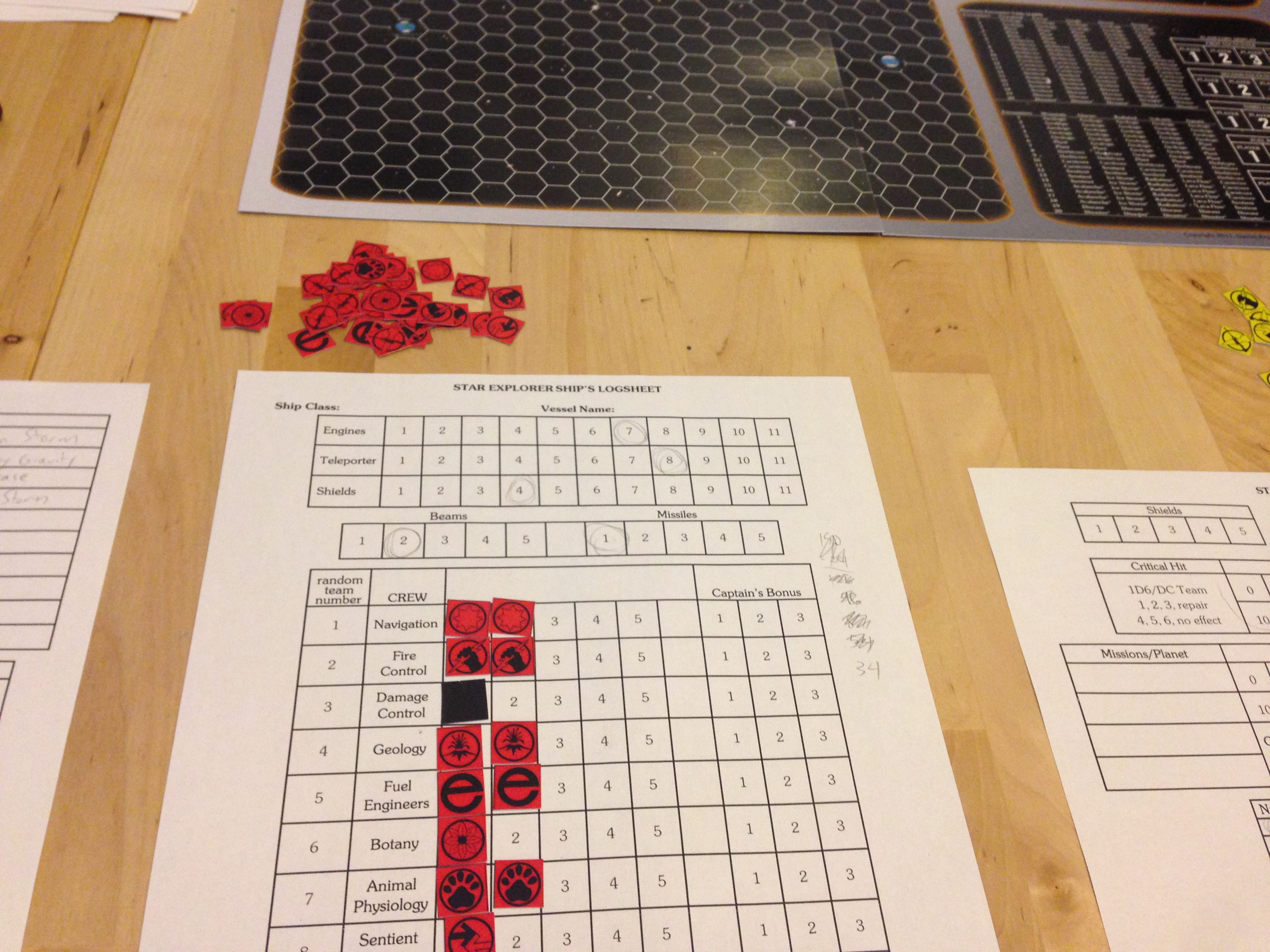 There was a moment in one of my games when I lost some of my crew after successfully capturing a large herbivore while exploring a swamp planet. Then while moving to another planet I encountered an alien vessel that I was (thankfully) able to negotiate with and avoid any conflict. In another game I had lost much of my crew to a disease on a jungle planet, and most of the survivors were stuck in sickbay. Those that remained were sent down to a different jungle planet and encountered still more disease, along with a dangerous species of alien plant life, and right in the middle of it all an alien battleship pops into orbit. Negotiations failed, resulting in a desperate space battle in which I managed to fend off my attackers but sustained more casualties and injuries. It didn’t go too well for the ground crews.

It’s fascinating to see how everything plays out, and you’ll always come away with at least one or two Moments to share. In practice it’s really just a lot of dice rolling and cross-checking tables in a poorly put together manual in desperate need of some sort of quick reference chart, but it paints incredibly vivid (and varied) pictures each and every time. 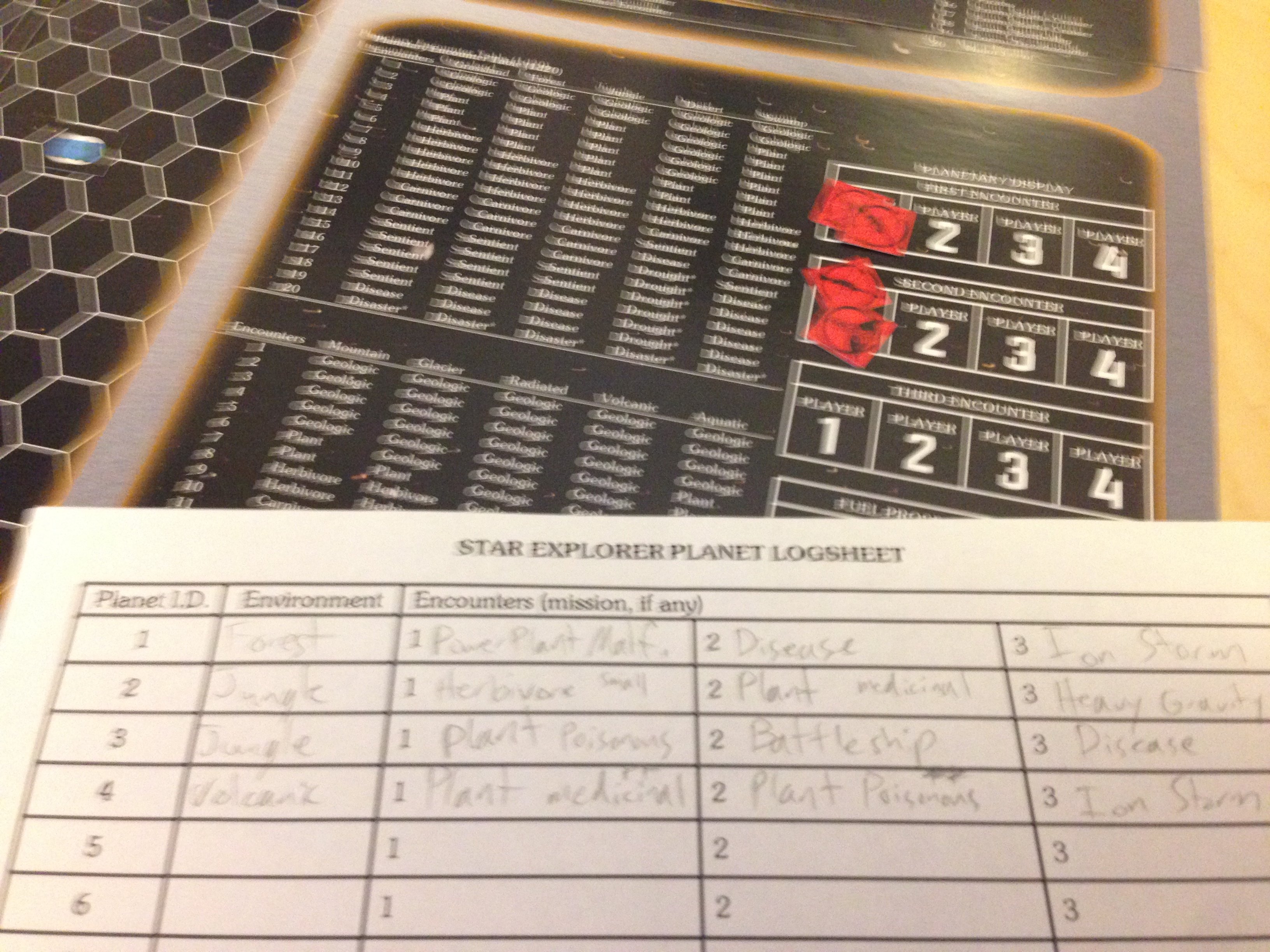 Star Explorer is a board game for board gamers who enjoy theme and story over flashy miniatures and artwork. Some patience is required due to all the cross-referencing of dice results, and the physical components make it downright difficult to interact with at times, but it’s a price I’m more than happy to pay.