As the resident Fighting Game junkie, E3 this year had quite a bit to cater to satisfy the itch for more of my favorite genre. Between what was shown in conferences and on the show floor, there’ll be quite a few interesting games to look forward to in the near future. While a lot of my hype mostly comes from fighting games this year, there was a certain surprise featured in Sony’s conference that you could say I’ve been dying to try out for an extremely long time. But I’ll get to that game at the end, let’s get all the fighting games out of the way first since I have quite a few in here…

First up is Mortal Kombat X, the newest entry in the long-running ultra-violent fighting game series by NetherRealm Studios. Originally announced a week before E3 before being shown on stage at Sony’s conference, Mortal Kombat X is taking an interesting approach to gameplay compared to previous installments. Past Mortal Kombat games have had either a standard moveset for fighters or they’ve had the ability to switch fighting styles mid-match. However, X takes a new approach to the series by giving each character three distinct fighting styles from which to choose after selecting your character. For example, Scorpion has a sword-based Ninjitsu style, a Hellfire variation which adds fire-based attacks, and the Inferno variation capable of summoning a demon to fight for you. A pretty good comparison to this in another fighting game is 2008’s Melty Blood: Actress Again and its updated versions. The E3 demo had six characters included.  Series veterans Scorpion and Sub-Zero are back, as well as four newcomers; Cassie Cage (daughter of franchise staples Sonya Blade and Johnny Cage), Kotal Kahn, D’Vorah, and the little lady/big crazy man pair known as Ferra/Torr. The trailers ask viewers the question: “Who’s next?” Find out when the bloody sequel komes to konsoles and personal komputers in 2015 (Yeah, I just went there.). 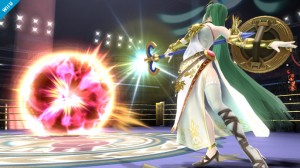 Up next is the duo of Super Smash Bros. for 3DS and Super Smash Bros. for Wii U. While neither game is new, we did get some exciting details during both Nintendo’s Digital Event and closed doors roundtable. For starters, rather than having just one way to play as your favorite custom-made Miis, gamers will be able to choose from three different Mii fighting styles. Combined with each character having multiple selectable versions of each special move, three different character styles for Miis will give players a lot of variety as they devise a plan duke it out with each other. As if three different Mii-based characters weren’t enough, Palutena from the Kid Icarus series were announced shortly after. I found Kid Icarus: Uprising on the Nintendo 3DS to be an absolute blast, and really enjoyed Pit and Palutena’s back and forth banter during the game. The trailer footage of her showed off an incredible variety in moveset potential, so playing as her should be very interesting. And, on top of those characters, Pac-Man was also confirmed. While normally sporting his humanoid, Pac-Man World appearance, he’s also capable of transforming into the classic ball form with no arms/legs/face as if it was the original game in 3D model form. All of these characters look to be very fun additions and I can’t wait to try them out in the finished product, especially Palutena. The only downside is that the 3DS game is now slated for October 3rd 2014, rather than the initial projected summer window. The Wii U game is still slated for ‘later’ this year. 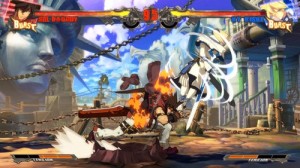 Third on my hyped-games list is Guilty Gear Xrd -Sign- by Arc System Works. For the past several years, the Guilty Gear series has been relatively dormant. That said, the series started a bit of a comeback in 2012 with an update to 2008’s Guilty Gear XX Accent Core + (said update would be called Accent Core +R). However, GGXXAC+R would simply serve as an appetizer for the next big game. Guilty Gear Xrd, which was released in Japanese arcades earlier this year, aims to keep the series artstyle but with an interesting twist: the game is made entirely in 3D via Unreal Engine 3, and the end result is a visually stunning game that retains the fast and intense gameplay that got the series is known for. It’s important to note that Xrd is a brand new game from the ground up, so the roster is smaller this time around in comparison to the previous sprite-based game. It has been hinted that an additional character is on the way. While most of Xrd‘s roster are returning characters — like series staples Sol Badguy, Ky Kiske, Millia Rage, Potemkin, and Zato-1 among others — two brand new playable characters make their debut in the series through this game; the nightmarish Bedman and the destructive Ramlethal Valentine. PlayStation 3 and PlayStation 4 owners can look forward to getting their hands on the long awaited new game in this legendary fighting game series this holiday season. There aren’t too many fighting games on the PlayStation 4 so, between this and Mortal Kombat X, this might be the start of a much needed push for the genre on the platform. 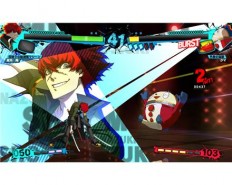 The last title in my fighting game hype-fest is quite possibly my most anticipated of the bunch: Persona 4 Arena Ultimax. The second installment of the collaboration between Arc System Works and Atlus, Persona 4 Arena served as a sequel to cult classic RPGs Persona 3 and Persona 4. Arena’s gameplay was fast-paced, yet also very welcoming to new players. That said, there was still a bit of depth for players who invested their time into the mechanics of the game. Ultimax picks up very shortly after the previous fighting game and is most likely going to wrap up all loose ends in terms of the story. Several new characters are to be included in the game, 6 of whom were playable in the build used at E3. Among the new additions are Yukari Takeba, Junpei Iori, and Ken Amada (the latter of whom fights alongside a shiba inu named  Koromaru, and all of these characters appeared in Persona 3) , as well as Rise Kujikawa from Persona 4. A mysterious new face to the series named Sho Minazuki is also playable and, much like the character Labrys, he also has two versions, thus rounding out the 6 playable newcomers. One version doesn’t fight with a Persona, and the other one does, thus offering a modified moveset for each version of the character. The game has been playable in japanese arcades for quite some time now and, much like Guilty Gear Xrd, is a case of console port after arcade exclusivity for some time. While the port is a PlayStation 3 exclusive game in Japan, international gamers can pick up this sequel to one of my personal favorite fighting games on either PlayStation 3 or Xbox 360 sometime in the fall. I’m very much looking forward to this one after the amount of hours I pumped into the first game. In terms of anticipation, this and Guilty Gear Xrd are definitely up there for me.

To wrap up my personal hype list, this is the part where I deviate from the script a bit — it’s not a fighting game. It’s a game I’ve always wanted to play but never got a chance to (mainly because acquiring it isn’t easy) that suddenly got a surprise announcement of a new release on the PlayStation 4 and PlayStation Vita. The cult classic PC adventure game Grim Fandango is making a comeback in the form of a remake by the folks over at Double Fine Productions. Tim Schafer was the director behind the game for its original release, and since he’s the founder of Double Fine this puts it back into familiar hands. This game, based on film noir and themes of afterlife, was given all sorts of praise upon release — but it wasn’t a hot seller. Knowing that I will be able to get this game portable on my Vita at some point is actually pretty darn awesome. Adventure games like this could easily benefit from being playable on the go, so being able to do that just gets me even more excited for this remake. Sony posted a retrospective about the original game’s release and how this remake came to be a thing on their YouTube channel, which you can watch below.