Fargo and Orange is the New Black were the toast of the TV world at last night’s Critics’ Choice Television Awards, scooping three prizes each.

Janney also picked up Best Guest Performer in a Drama Series for her recurring role in Masters of Sex.

Upon receiving the trophy for Mom, Janney quipped, “Well this is the climax of my career. This is extraordinary. This has been an amazing year for me.”

In the drama categories, Breaking Bad won Best Drama Series for a second consecutive year, and Aaron Paul picked up Best Supporting Actor for his role in the popular show.

In addition, Jim Parsons presented his The Normal Heart director with the Louis XIII Genius Award in recognition of his contribution to television. Upon accepting the honor, Murphy recalled the slew of online criticism he received following the announcement of the award, and admitted he tried to back out as a result.

He also shared a piece of advice, telling the audience, “The one genius rule I have made in my career is to surround yourself by people more talented than you and then take all the credit. The last part is actually not true.” 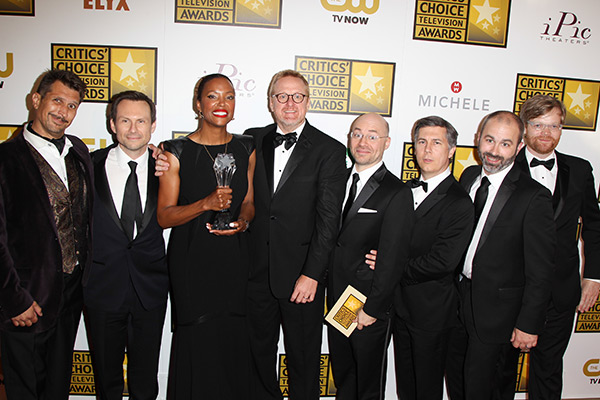 Finally a HUGE congrats to the Archer cast and production crew, as the show took home another Critics Choice Award and Aisha Tyler gave an impressive speech thanking none other than Kanye West, according to Zap2It:

First off, we’d like to thank Yeezus,” Tyler said. “Not Jesus, but Kanye West for making us feel so much better about our own soul crushing narcissism. Chris Parnell actually stared into the mirror for over two hours today without feeling any guilt whatsoever, so thank you for the beautiful, beautiful gift, Kanye.”