USA Network’s newest series, Satisfaction, premieres July 17th. It’s a rather sexy series for the network that posses viewers with the questions – What really makes you happy? And how far will you go for it?

SATISFACTION explores modern marriage at its midpoint, through the lens of one couple, Neil Truman (Matt Passmore, “The Glades”) and his wife, Grace (Stephanie Szostak, “The Devil Wears Prada”). Exploring themes of modern love, sexuality, infidelity and fulfillment, this series answers the question, “What do you do when having it all is not enough?” by delving into this couple’s shocking and unconventional choices. 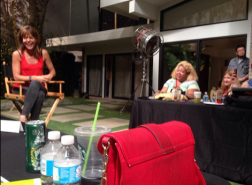 FanBolt was recently invited out to the set of the series, which films not far from our offices here in Atlanta, Georgia. We had the chance to tour the set including the Truman home as well as Neil’s office. We didn’t get to see the amazing pool however, as that resides in an actual backyard in the Atlanta area. We did however completely fall in love with the Truman’s bathroom as well as their 16-year-old daughter’s room. I wish we had been allowed to take pictures, but you’ll just have to trust us and watch the series to see how awesome those two sets are!

When we arrived at set and after we walked through the Truman home set, we were able to interview the cast, including Katherine LaNasa, Stephanie Szostak, Michelle DeShon and Matt Passmore.

Each cast member answered our questions on what we could expect to see from their characters, why they think you all should watch the series, what their best relationship advice is and more….

Can you tell us a bit about your character?

“On a conscious level, I don’t think she’s aware something is wrong. She definitely beats to her own drum. She’s not traditional, she’s very brave. I wish I could be more like her.” – Michelle DeShon (Anika Truman)

“The secrets are allowing her quiet. When you take the noise away, that’s when you can find yourself. It’s more of an awakening. You’re a mother, a wife… wait who am I?” – Stephanie Szostak (Grace Truman)

“I’m not an escort. I’m a regular guy that just went crazy for a few nights. That’s what I like about him, he goes out and does something about it. He takes action, he doesn’t just talk about it.” – Matt Passmore (Neil Truman)

After having filmed this series, what is your best relationship advice?

“Whenever women don’t need men – they get the upper hand.” – Katherine LaNasa (Adriana)

“Honesty. We’re so afraid to be honest, because you don’t want to hurt your partner.” – Stephanie Szostak (Grace Truman)

Why should people watch Satisfaction?

“I think the grey area is the world that we live in. There is escapism TV, and there is a place and audience for that. But this series is definitely in the grey area. Its a hard one to sum up. And that’s why I really liked it.” – Matt Passmore (Neil Truman)

“It’s so out there. It’s really complicated and very original.” – Katherine LaNasa (Adriana)

What do you think about filming in Atlanta?

“Everyone is so nice! I love it it. I’m having a great time living in Innman Park.” – Katherine LaNasa (Adriana)

“The heat is a little much, but the food is great! We went to Bacchanalia after we finished the pilot.” – Michelle DeShon (Anika Truman)

“I just found my pub, but I’m not going to tell you the name of it!” – Matt Passmore (Neil Truman (eluding to a pub in Atlantic Station)

A huge thanks to USA Network for having us out to set for this event! We had a great time!

Be sure to catch Satisfaction on USA Network July 17th at 10/9c!