As a follow-up to my initial article, I have decided that I would like to provide a further opinion on Ghost Recon Phantoms, as I’ve added an additional 40 hours of gameplay since my original editorial. That totals up to 65 hours of game time in Phantoms.

It’s not often that I cross the 50 hour mark of play time in a video game. The only games that capture my attention like that are multiplayer shooters, like the Ghost Recon and Call of Duty series. Of course, the Ghost Recon games back in the day took me long past hundreds, if not thousands of hours of time on the gameplay clock . That’s how dedicated I’ve always been to the Ghost Recon series. Among them are, by far, my favorite games of all time.

As I said in my original article on Ghost Recon Phantoms, I wasn’t too thrilled about a free-to-play Ghost Recon game. I was still upset by the ruined multiplayer gameplay seen in Future Soldier and didn’t want any part of a free-to-play title. For whatever reason, I still decided to give it a chance and found myself pouring a lot of time into Phantoms. Since that point, and the time of my original article, I’ve tripled my initial time investment. Why?

I must remind the readers that I’ve had no support from Ubisoft on this game, so I haven’t had any special press access, download codes for goodies, or anything like that. I straight up played the game as offered to everyone for 50 around hours until last week’s Steam Summer sale, where I purchased discounted gameplay packs upwards of 80% off.

I had a great time playing the game without purchasing any of the special packs, and I was still competitive with players without needing all the upgrades. When the Assassin’s Creed pack was announced, I became very interested in purchasing it, but 20 bucks for that was an absolute no-go. However, with the discounted price of $3.99, I decided to see what the pack was all about – and I’m so glad I did! 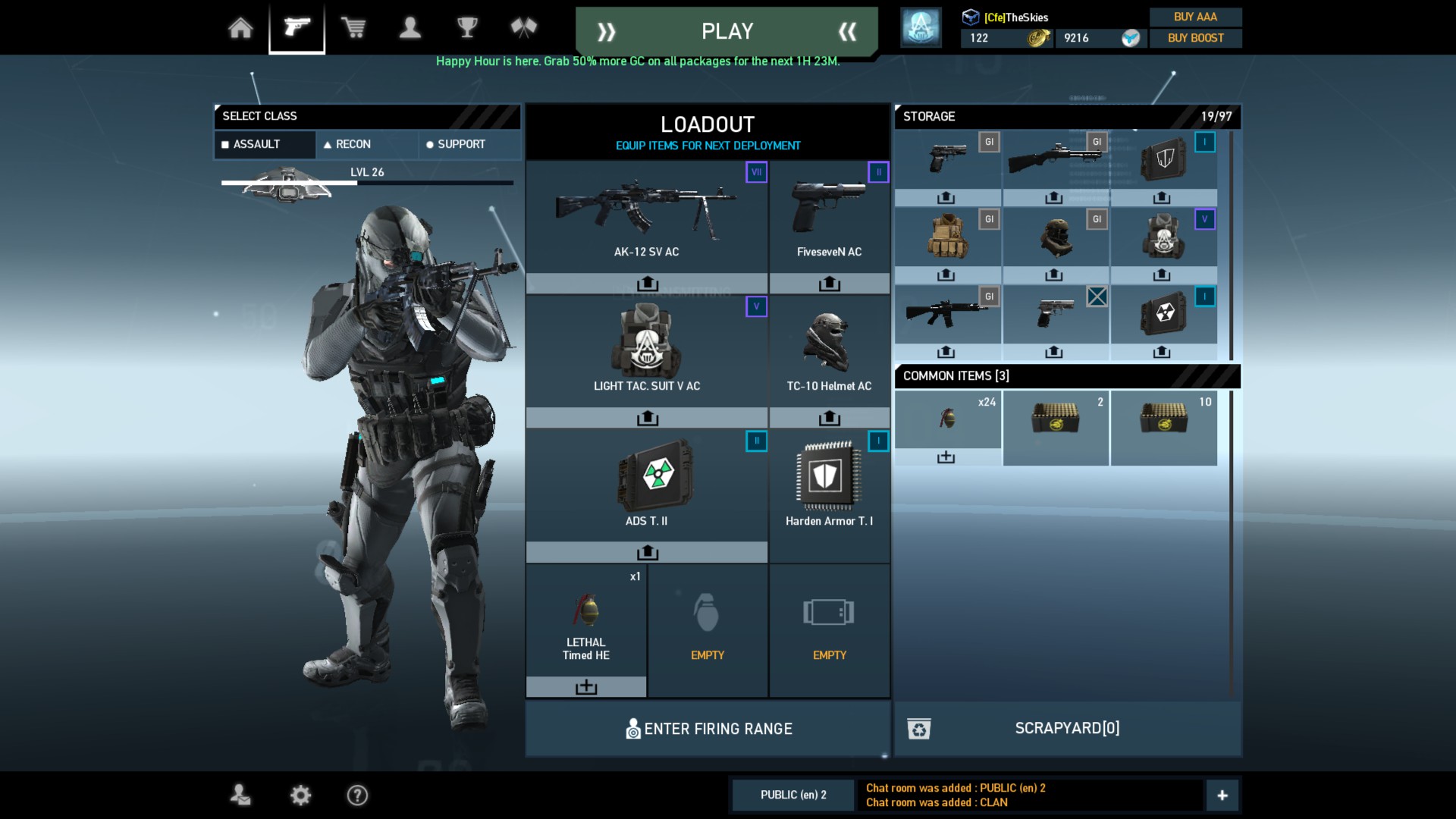 I primarily play Assault, even though I enjoy the Recon and Support classes. Assault fits my style best though, so I’m always in the middle of the fight. Before purchasing the upgrade, I averaged around a 1.1 Kill/Death (K/D) ratio. Pretty good for only using a Tier II weapon that’s been fit to my style. However, now that I am running with the Tier VII weapon, I’m averaging a 1.2 K/D ratio. Yes, that doesn’t seem like a great increase at all, but it’s very noticeable that the extra power and control leaves its mark on the players I hit. Also, FYI, I always use the special ammo for maximum damage.

With the more powerful weapon in hand, I’m taking more risks that puts me in increasingly challenging situations. So while I’ve only increased my K/D from 1.1 to 1.2, I’m now a lot more aggressive and have seen far more kill streaks than ever before. The only problem I have is that sometimes I’m a little too aggressive and struggle to find momentum. I had one round where I finished 17-15, but I had a 9 kill streak which was my biggest streak yet. I don’t think that could have happened with my regular weapon. 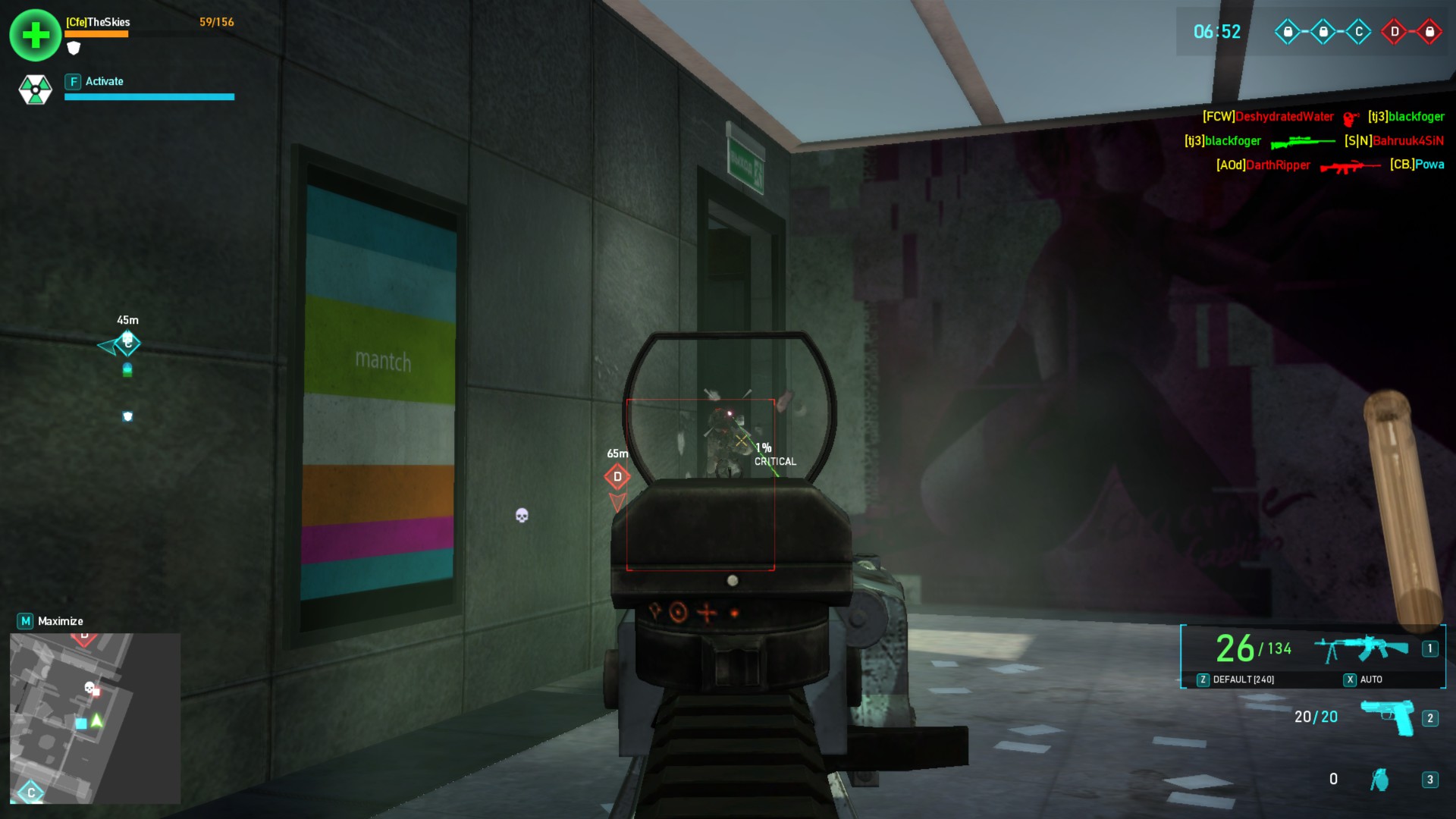 Because of the extra power and the increased accuracy that the weapon packs, I don’t have to be stuck to a wall waiting for players to appear, hoping that my shot is more accurate than theirs. I can now jump forward and even walk and aim as I turn a corner and know that my gun isn’t going to bounce all over the place. I didn’t think it was possible to approach a corner and kill someone when they come out from cover to shoot; I always thought that the person behind cover would always win these encounters.

Players still need to be prepared though when approaching the corner and leading the spot where the enemy would pop out; that person that has cover still has the advantage. I’m just saying that now with more accuracy and power, I can take on anyone anywhere with the right approach.

Still, a lot of this comes down to play style and situational circumstances. The most important discovery out of the Assassin’s Creed pack is that it definitely pays off to purchase it. While I could still compete before, I am now on a more equal playing field with a lot of the top players because I have higher quality equipment. So, even though it’s free-to-play, it certainly pays off to put in some money into this game. 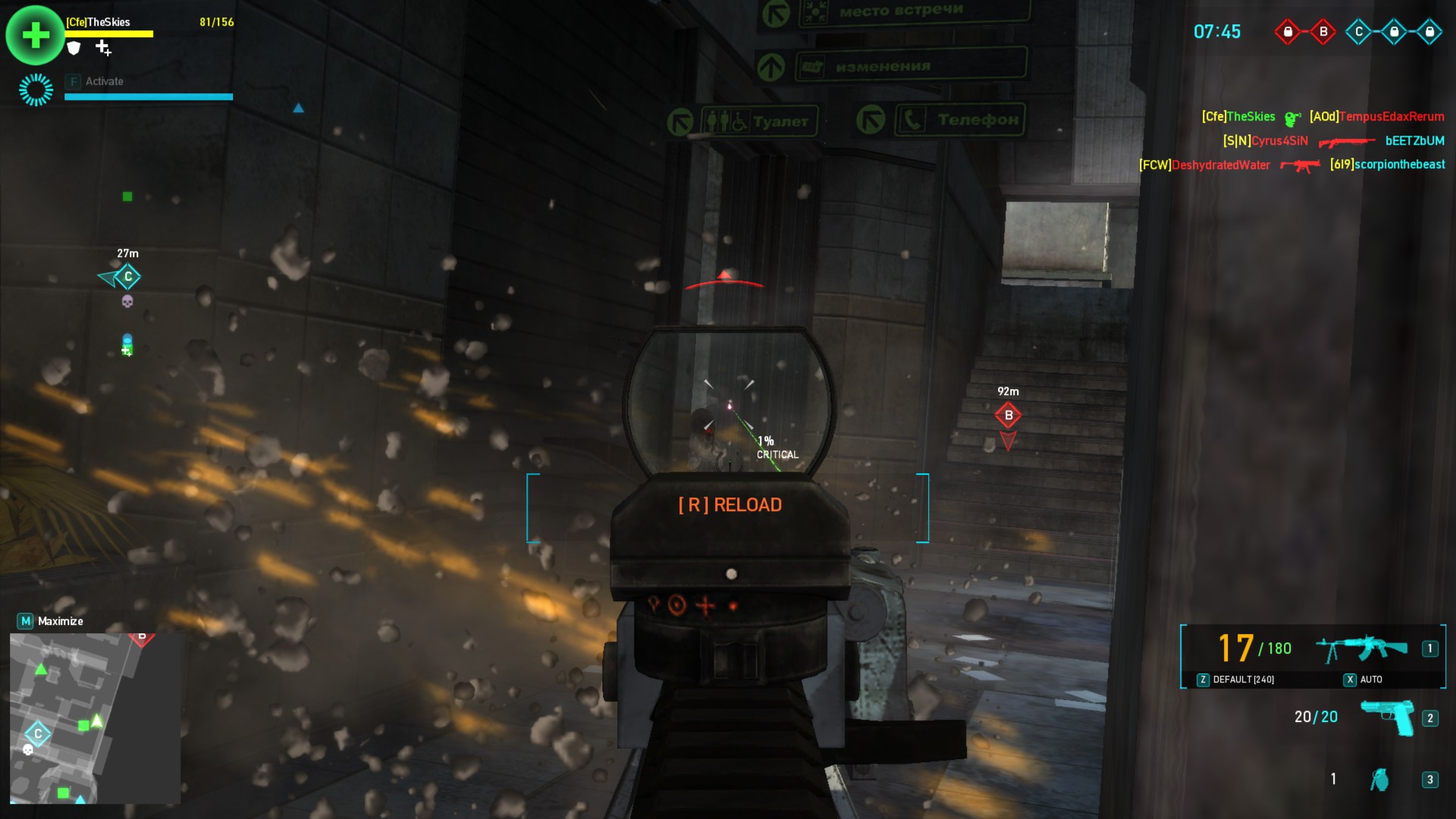 The good thing about Ghost Recon Phantoms is that players don’t have to ‘pay-to-win,’ as they can still compete without spending a dime. The best thing about the payment options are that players don’t have to constantly pay to stay at a high level of competitiveness. Meaning, I paid $3.99 for my pack during the summer sale and don’t feel like I need to enhance any of my equipment at all. Think of it as a one-time payment and that’s it. I could still enhance my soldier, but I doubt it would improve by much more than what I have with what’s available to me now.

Of course, the unfortunate thing is that players that come in now will have to pay $20 for the same pack I paid $3.99 for, as the summer sale is no longer available. Anyone who remotely enjoys playing Ghost Recon Phantoms shouldn’t have skipped a beat to purchase one of the packs at $3.99. That’s a no brainer. But would it be worth it to spend full price on one of the special packs?

Ghost Recon Phantoms is a fun, team-based shooter with lots of unique situational gameplay thanks to the technology used for weapons in the game. Phantoms also provides players with a lot of enjoyable maps and a cover-based system that remains entertaining and only rarely frustrating. It’s not the Ghost Recon experience I’ve been waiting for, but it’s certainly well ahead of what was offered in Future Soldier. I think I can say that I officially love the game. 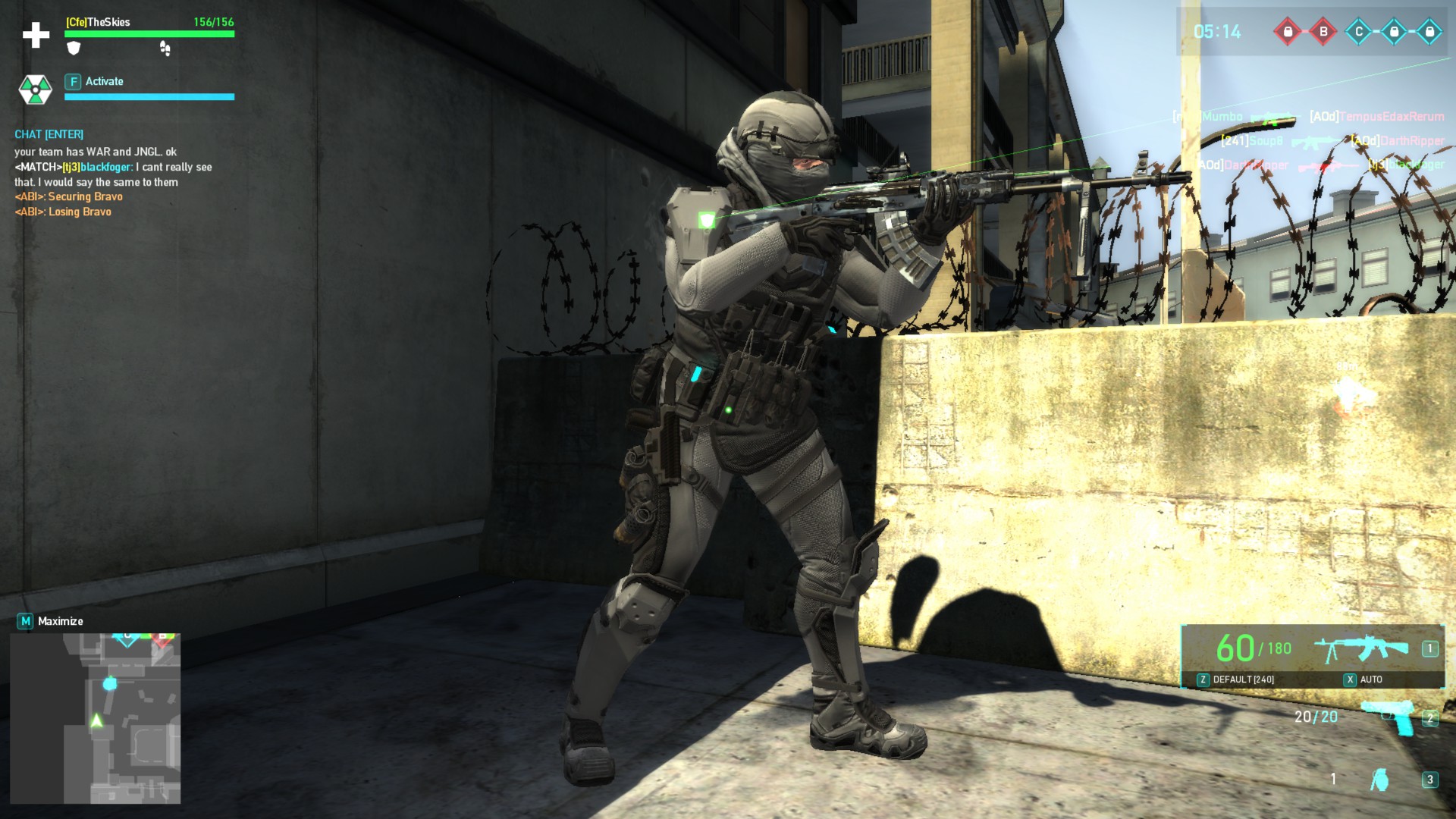 If anyone is going to play Ghost Recon Phantoms for more than 50 hours, I recommend a single purchase of no more than $20 to help ensure that they can compete with the top players. Twenty bucks for a highly entertaining game isn’t a bad deal at all. I know I was fortunate enough to only have to pay $3.99, but now that I have made the purchase I can see all the benefits it provides me with. As I mentioned, after the initial purchase, there isn’t much more that players need to purchase, as everything else can be bought in-game with earnings from matches. Of course, if someone decides to pay $20 for a Recon pack but then later decides they want to play as an assault, they’ll have to pay another $20 for the assault pack. So choose wisely.

It’s a free-to-play title, so of course there are always going to be instances where they try to make their money. The good thing is that I never felt like I had to purchase anything, except I wanted to when it was on sale. Hopefully they’ll have another sale again soon where players can spend $10 or less on the packs, as that would be absolutely worth it. $20 seems steep — especially if you play multiple classess — but I wouldn’t blame anyone for making that purchase, as it does increase their competitive level. Like I mentioned, players just need to make sure they purchase the class that fits them best and that they actually want to spend a lot of time playing this game.

Now maybe they could use some of that money to fix the servers and make them quicker! That would be nice!

I leave you with a full match gameplay video using my newly-purchased Assassin’s Creed themed gear.