In a refreshing reminder that video games are not always about fetch quests or mowing down endless waves of generic bad guys, 4 p.m. was released today on Steam for $4.99. With its own distinct visual style it promises to bring a truly immersive experience, with a gripping, emotional and ultimately very surprising story that’s dictated by player decisions.

“It’s a game driven mainly by its story, with some certain game like elements and mechanics,” said Bojan Brbora, a cinematography graduate from the UK National Film and Television School and creator of 4 p.m.

With gaming protagonists nowadays looking either ridiculously badass, armed to the teeth or overpowered with abilities or gadgets, you play as one of the most unconventional and seemingly mundane characters yet: a middle aged drunk woman, one who’s absolutely sick of her dead end corporate job.

“It’s different from most games as it is a contemporary story and not fantastical,” said Brbora. 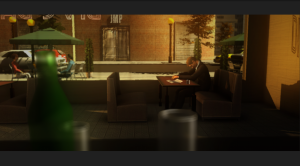 Caroline Wells wakes up with a pounding hangover to the incessant shrills of police sirens and starts what she thinks will just be an ordinary day. When you step into her shoes and start making her daily decisions for her, you realize that today might change Caroline’s world, forever. There’s no heads up display or inventory in this game either, which is a pleasant change. You’re forced to care about this woman and her day-to-day activities as you slowly learn about her life struggles and uncover a mystery that culminates in a very cathartic experience at 4 p.m.

“4 p.m. is a series of scenes and snapshots,” said Brbora.

Bojan Brbora‘s learned cinematography skills are clearly present in this game as it boasts rather creative shots and an orchestral score. It plays like an interactive movie, and is more about feeling like you’re actually in the head of Ms. Wells as she dives into a downward spiral. According to Brbora, his debut game also features professional voice acting and a unique experimental score he recorded with some composer friends from his school. This game is an excellent nod to the idea that one day you might wake up and you’re life can change in an instant.

“I hope people will think about what they are playing, and see where games as a medium can go,” said Brbora.