I’m not ashamed to admit that I suck at a lot of games. Maybe I’ve been softened up by the hand-holdy games of today, but I did grow up back when games were hard; Contra was the first game I ever played. Sometimes I sit down with easy games, like Kirby: Triple Deluxe, and have an absolute blast. It leaves me wondering why I’d put myself through the experience of flinging a controller in frustration over a game. But can hard be good?

When I think about the games that have given me the most fits, poor and lazy design are almost always the culprits. How do we make the game harder? Bullets do more damage. Enemies spawn endlessly. Add a timer. Unblockable hits. More of this. Stronger that. The frustration comes not from my own failure, no. Instead, I feel like I’ve been cheated. The AI was cheap. Have you ever had any of these thoughts? If you haven’t, you probably also saved a lot of money by not playing a Midway game at the arcades.

The alternative is smart and calculated design. I must have died hundreds of times playing Super Meat Boy, but not once did I ever feel cheated. The level design in that game, while devious, is totally fair. The developers took special care to make sure that the player would be equipped with the skills and knowledge that they would need to beat each level – any failure was the result of poor execution on the part of the player. And that’s what made it so rewarding to play and master. 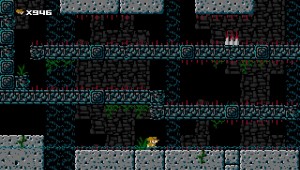 1001 Spikes is, in a lot of ways, just like Super Meat Boy. Just, ahh, more devious. The game walks the player through an initial set of levels that outline that knowledge and skills thing that I was talking about. From there, it’s up to the player to execute. Now, some may cry that the game does indeed have some ‘cheap deaths’ in the form of falling platforms, hidden spikes, etc. But I’d argue that it’s all part of the mechanics of the game.

Like Super Meat Boy before it, the developers intended for players to die – and die a lot; it’s how we learn how to beat each level. I found that I would often knowingly sacrifice myself in order to design a route, rushing back to do it the right way on my next try. By the end of chapter two, I was able to predict where certain obstacles would appear, allowing me to clear some levels in just a few attempts.

You get 1001 lives to beat each of the 30 levels and recover their hidden golden skulls. That’s a little over 30 attempts per level. I’m afraid that I can’t say that it’s plenty, as the game does get more difficult as it goes on. I never spent that allotment on any one level in the first half of the game, which merited a bunch for me in the back half. Thankfully, there’s a level skip that players can utilize if they find themselves throwing lives away. Save it for later.

Not once did I find myself frustrated with 1001 Spikes. Each death resulted in one of two things; realization that led to determination or, simply, a smile. The level design is smart, calculated, devious, and expertly crafted. While I do think that it’s hard done right, hard isn’t for everyone. This game is not for the faint of heart. But if you’re looking for a considerable challenge that is founded in great design rather than cheap difficulty inflation, then 1001 Spikes is just for you. Also, Super Meat Boy.

This review is based on having played both the PlayStation 4 and Vita versions of the game. Do yourself a favor and play it on Vita. The d-pad will save a few of your lives.