This is a town of secrets. It’s a town of greed, of corruption, of back-alley power-plays and underhanded double-crosses. This is a town for sale, if you’re the kind of person who has what it takes to do what’s necessary; to bloody your knuckles, ruin a few lives, and grease the right palms. This town is a powder-keg, just looking for a reason to go off. The only question is, are you ruthless, cunning, and rich enough to be the one to strike the match, and to be the last one standing when the dust settles? 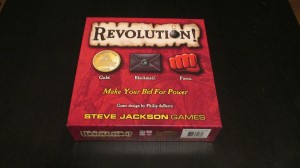 Steve Jackson’s Revolution! is an area-control game of bluffing and bidding for 3-4 players (or up to 6 with the Palace expansion). The component quality of the game is fantastic, with colorful boards and nice, thick currency tokens. The main board features 7 districts of the city, each one able to contain a different number of influence cubes. The more spaces available in a district, the more difficult it is to maintain control, and the more points control of that district is worth at the end of the game.

Each player gets a bidding board, influence cubes, and a player screen in their color. Turn consist of players assigning resources to these boards in secret, and then simultaneously revealing and resolving the effects of their bids. The bidding boards show 12 characters, the movers-and-shakers behind the city’s inner-workings, and how each of these characters can influence the city.

Using the game’s 3 forms of currency, Gold, Force, and Blackmail, your task is to bribe, intimidate, and threaten these characters into spreading your influence for you, blocking your opponents’ movements, and securing resources for your next turn. But your opponents are also trying to buy off these same characters, and there is the constant danger of being shut out should a resourceful opponent fathom your bidding strategy. Once there are no influence spaces left on the board, victory points are tallied and a winner is declared!

Revolution! is quite simple, really, and therein lies its worth. The entire game can be explained in minutes, and once players get into a rhythm of bidding, the game can move at a surprisingly fast clip. Your challenge is entirely based on out-guessing your opponents’ bidding strategy, while simultaneously keeping an eye towards generating resources and support for yourself. The rock-paper-scissors of the game’s 3 currencies adds just enough complexity to the bidding mechanic to make it interesting – the person with the most gold, for instance, isn’t guaranteed to win, no matter how much they invest. It’s a deliciously cut-throat game, but since actions are chosen in secret and competition is indirect, it is very difficult for anyone to feel particularly ‘picked on’, which is a serious boon in any game.

Of course, simple gameplay invariably leads to some drawbacks. In the event that two players tie on their bid for a character, no one gets that character. While this allows for a clever bit of strategy when neutralizing another player’s tactics, it also means that an unlucky string of bids can leave two or even three players impotently swiping at each other and burning resources, while a player who has focused on other characters runs away unchecked for a few turns. Also, it is entirely possible for an indecisive player to completely grind the game to a halt as there is no mechanism to limit the amount of time players have to contemplate their bids – those who suffer from perpetual analysis paralysis need not apply. Finally, as someone who has a live-in playmate, it is unfortunate that the game has no built in 2-player option for me and my wife, though there are several homebrew variants out there.

Is Revolution! revolutionary? Well, no, as there are plenty of other quality bidding and area-control games out there. However, it is still a genuinely good time, and with its high-quality components, simple-yet-engaging gameplay, and relatively quick playtime, it is bound to hit the table in between headier, heavier games.

Revolution Review - The Revolution Will Not Be Civilized