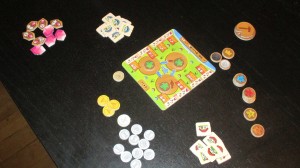 One day a month, my wife and I have the pleasure of attending a board game meet up at a café near the NYU campus.  It’s something we both look forward to all month (despite the frequent impromptu game nights we host among our friends).  It’s always a good time – three or four dozen gamers, sinking enthusiastically to all manner of board game.  And one evening, after several hours of playing both old favorites and new games, I came home to find a small envelope.  Enclosed therein was a Kickstarter game; one I had funded months ago on a whim, which had looked to be the smallest worker-placement game I had ever seen.  Curious, I punched out the tiny tokens, examined the palm-sized board, and, after glancing over the rules, sat down with my wife to play one last game before heading to bed.

It blew away everything I had played all night. 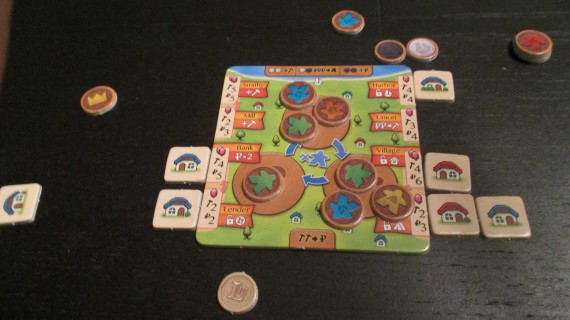 Province, developed and produced by Laboratory, is indeed a worker-placement style game for 2 players, designed on an extremely small scale.  Physically, Province fits into a tiny zip-top bag, with a game board less than 3 inches across.  Its tokens are similarly tiny, though I was pleased to find that they were of good quality cardboard stock, with excellent color saturation and clear, effective iconography.

Nearly everything about Province fits the ‘micro game’ definition.  The rules took less than five minutes to learn, and roughly half that to be explained.  Our first game took less than ten minutes to play.  Setup is nearly instantaneous, and victory and defeat are likely separated by less than five points.  But for such a small game, Province feels larger in two distinct and critical ways – its design is damn clever, and it’s fun as all heck.

In turns, the players will move workers around the board’s 3 production spots, earning either Coin or Labor, depending on what space the worker moves to.  They can then spend these resources on constructing one of the eight buildings that make up the Province.  The first player to build each building earns precious victory points, as well as unlocking some unique function that cannot be accessed without the appropriate structure.  As more buildings are completed, additional workers get added to the labor pool, creating a production engine that ramps up at an effective pace.  The challenge of the game is further augmented by randomly chosen victory point goals (such as being the first player to 4 buildings or ending your turn with more than 5 Coins), the collection of which can cause a game to end quite suddenly, turning a potential route into a much tighter game.  Province seems to be the type of game to never over-stay its welcome – long before the game can feel slow, one of the end conditions triggers, and a winner is declared.

Simplicity is Province’s strength, but it is not its defining characteristic.

Sure, it’s small – the components aren’t flashy, but they are very well made and, far more importantly, are perfectly suited to their function and are high quality (tragically, my Kickstarter version bares some minor damage as a result of its journey through the postal system, but it is perfectly playable nonetheless).  The game’s design is lean, bereft of any excessive mechanics in the absolute best way.  There is enough complexity to keep a player engaged and thinking, including some minor elements of randomness once a player constructs a Harbor.  At first glance, some buildings seem sub-optimal, but even the lowly Lender can be devastating when used correctly. 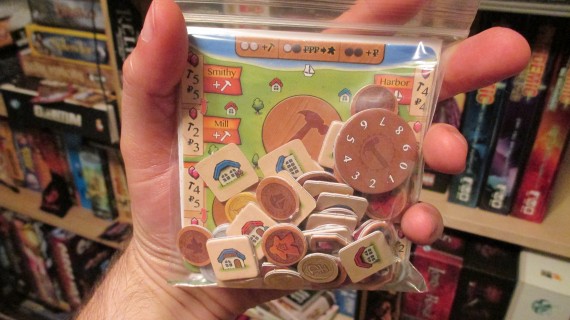 I’ve owned Province for approximately 14 hours, and have already played it a half-dozen times.  What could have been a throw-away investment in a game with a silly gimmick is clearly one of the smartest purchases I’ve made since I started collecting games.  With its extremely reasonable price-point and wonderfully tuned mechanics, Province’s design is simple, but nowhere near simple-minded.