Last week Ubisoft dropped a new CGI trailer called “Master Assassin”, that not only showed some of Arno’s stylish moves and impressive parkour skills, but also hinted at a potential love story. And oh is it a complicated one!

In the trailer we’re introduced to Elise, a gorgeous Parisian redhead. She’s also a girl that Arno deems worth climbing half-way across Paris, pushing through an angry mob, and dispatching a squad of royal guards, to save from a public execution. Arno leaps up to the chopping block for a final assassination that’s reminiscent of Altair in the trailer that started it all. Elise is saved from the guillotine and as she raises her head in appreciation she reveals the dark red cross of the Templar order that hangs confidently around her neck. Arno raises his sword, not in retaliation but to cut the ropes that bind her. Arno, described by voice actor Dan Jeannotte on Twitter as brash and irresponsible, is in love with a Templar.

Arno already seems like the type of character that would induce such a Romeo and Juliet type of romance and according to Jeanotte Arno fights for love and justice. He’s sharp and sarcastic and it doesn’t seem like a centuries long blood feud between two ancient orders can deter him from dating who he wants. It will be interesting to see how the conflicting ideologies of the Assassins and Templars play out in small scale couples arguments. Something tells me that the pillow talk of Arno and Elise will be much less about feelings and more about controlling the fate of mankind. Will one convert the other to their cause? Will their romance stay true despite the fact that they are at war with one another? If we can learn anything from past Ubisoft love stories there will probably be many dramatic, complicated and tear-jerking moments. There are surely more questions then answers at this point, but one thing is for sure, in one brief moment in the trailer, the Assassins and Templars for once experienced unity. 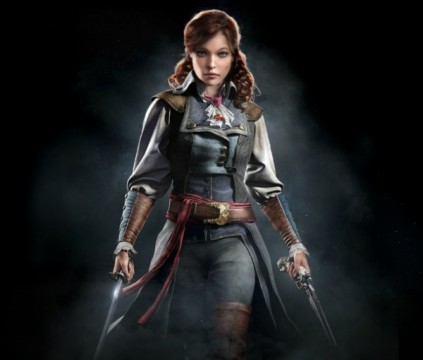 What do you predict from this highly unlikely romance? And how do you think the deadly couple made it out of the sticky situation at the end of the trailer? Let me know @FrancisFlisiuk or @FanBolt on Twitter.