Entwined is a beautiful game that puts an emphasis on art and experience. It is definitely in the same vein as Flower, what with its tranquil and moving soundtrack, cheerful color palette, and overall soothing aesthetic. And I think that it certainly succeeds in that regard. I played through the story mode in one sitting, and was moved by its beauty and simplicity in illustrating the power of commitment and the strength of love.

There’s one caveat here; I had that kind of experience because I’m a musician – more specifically, a conductor. I’m not trying to be snooty. In fact, I’m not really talking about the artistic aspects of the game at all. What I mean to say is that, because I’m a conductor, I’m far more ambidextrous than the average person. And it definitely served me well when playing Entwined. 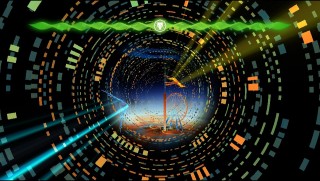 You see, this game is played using the two analog sticks to control two different characters at the same time. Because of the interdependency of hands that is required to conduct and play piano, I had an easy time adapting to the simple control scheme. This stick moves the orange guy, this stick moves the blue guy. And even as the game got more difficult and asked my brain to perform different, simultaneous tasks, I cleared them with ease. I found that the game was even easier when playing the Vita version. The Vita’s sticks have a very small range of motion, which allows for a quicker traversal from one end to the other.

So color me baffled when I heard others say that they despised the game, that the controls were frustrating at best and broken at worst. Something that had come so naturally to me literally ruined the experience for other people.

I have wracked my brain to come up with solutions for those people. Most gamers are used to using the two sticks in different ways simultaneously in order to control one character. So what if they saw the two characters as one unit? At the beginning of the game, the sticks will synchronously move the same distance in the same or opposite directions. If you can see the task as being one collective movement instead of two separate movements of individual sticks, then the game becomes a bit easier. 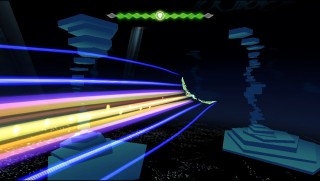 However, as the game progresses, this becomes more difficult to envision. There are times where the left and right thumb will be asked to complete different tasks at the same time that are not equal and/or opposite, with one of the two lasting longer, changing directions, starting later, or some combination of the three. My brain is totally wired to do this, but I’m afraid it could take some serious practice for some folks to ‘get it’. It can be learned, sure, but the learning curve will be different for each person.

What I’ve described is just the story mode for the game. The legs come from a challenge mode that tasks players with navigating an infinitely scrolling level, allowing just three mistakes. Even I am struggling to advance and net higher scores because of the difficulty of the challenge levels. Again, I found that the Vita version was a bit easier to play thanks to the smaller sticks. I netted much higher scores on the Vita vs the PS4.

It’s heartbreaking to say that this game won’t be for everyone, because I believe that it’s one of those games that everyone needs to experience. But it simply demands a skill that is otherwise not used in the daily lives of the vast majority of people. Try air-drawing two different letters of the alphabet at the same time, one with each hand. If you can’t do that, you’ll likely be frustrated with Entwined.

This review was based on both the PS4 and Vita versions of the game.

Entwined Review for PlayStation 4, 3, and Vita