Two superpowers are at odds with each other. Both are in a race to construct nuclear armaments, and each wants to be the first to fire them at the Moon. The resulting destruction would, naturally, cause the Moon to fall out of orbit and smash into the Earth – wiping out all life in the process. That’s where you come in. As an Agent of C.O.U.N.T.E.R you have no affiliation to either side, and are the perfect candidate for stopping both governments from foolishly destroying the planet for no actual reason.

Rather than going the “safe” route and cast you as an American agent combating a bunch of Russians, CounterSpy presents both sides (the obviously American ‘Imperialists’ and the obviously Russian ‘Socialists’) in a similar light. The only real difference between them are their choice of interior decorators and the words they yell out right before you shoot them in the face. It’s an honestly refreshing way of going about presenting a mock Cold War story about warring superpowers and their disregard for anything but beating the other side. 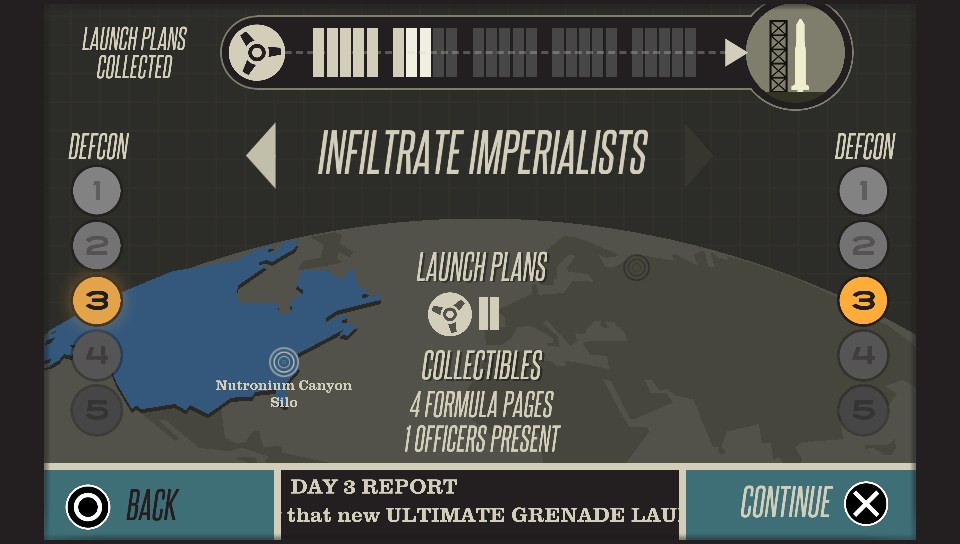 Your main goal in CounterSpy is to infiltrate bases on either (or both) sides in order to collect the data necessary to disrupt both their plans. Each mission you take will give you the chance to gather special intel like launch codes or coordinates, and once you’ve gotten your hands on enough you’ll be able to take on one final mission in an attempt to put a stop to the (admittedly rather stupid) global threat posed by both factions.

Oh but there’s so much more to it than that.

Aside from the intel you’ll be sniffing out, some missions will also give you the opportunity to collect weapon blueprints, formula recipes, or valuable documents you can use to fund the construction of said weapons and formulas – assuming you have the proper recipes and blueprints, of course. All of these items are scattered throughout the mission area and are often locked away in safes. Easy work for a spy such as yourself but blowing these containers open will alert nearby guards, which means you’ll need to neutralize them first. 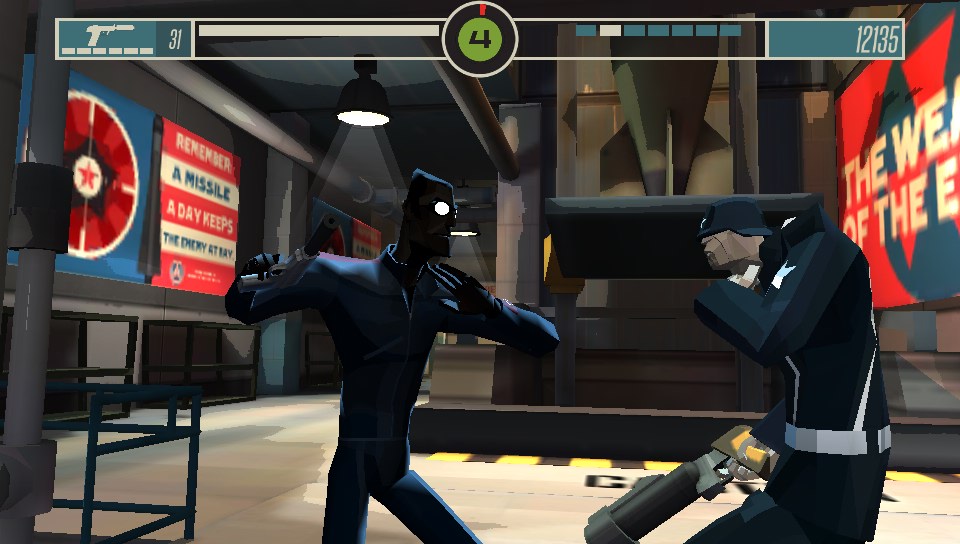 Sneaking up on a guard (or simply getting close enough) will give you an opportunity to kill him without the use of guns – great for keeping things quiet and even better for saving ammo, which is severely limited. And when you come up on sections of a room featuring yellow and black ‘traffic arrow’-looking markings you can snap to cover to keep out of sight. If you’re spotted, however, you’ll need to fight back. And keep an eye out for guards radioing for help, avoid cameras, make sure not to leave a room with alerted guards in it, and plan old don’t die – because if you do, the DEFCON level for that faction will rise, and if it goes past DEFCON 1…

Taking cover is more useful than simply hiding, however. Whenever you duck behind something the camera will shift and give you a much different view of the typically side-scrolling area. You can pre-aim your shots a bit using the right stick, pop out of cover and start firing (or take a quick shot and duck back), or simply wait for the patrolling soldiers to come to you and take them out with your bare hands. 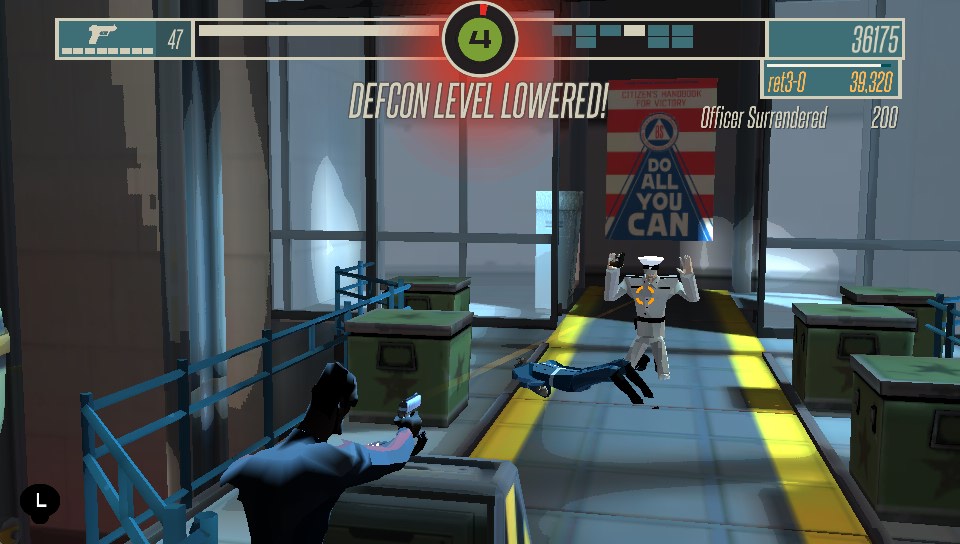 It’s certainly possible to complete a mission without relying on stealth, but taking the quiet route is much easier in the long run. There’s less risk of injury, less risk of the DEFCON level rising, and the more guards you take out without being spotted the more your Stealth multiplier rises (i.e. the faster you earn points). Why do points matter, though? The fate of the world is at stake! Well, points matter because CounterSpy is constantly pairing you up with a rival agent (i.e. player) and challenging you to beat their score. Fail and you simply get a new rival, but succeed and you’ll then be able to track down their body in a later mission and recover intel worth quite a bit of cash. Plus it’s super-satisfying to know you completely stomped all over someone else’s high score.

The best part about all of this is that CounterSpy wraps all of this up in a very slick package. The visuals are fantastic, the theme is wonderful, the music is practically perfect, and you’d never know the room layouts for each mission were randomly generated if the game didn’t remind you. 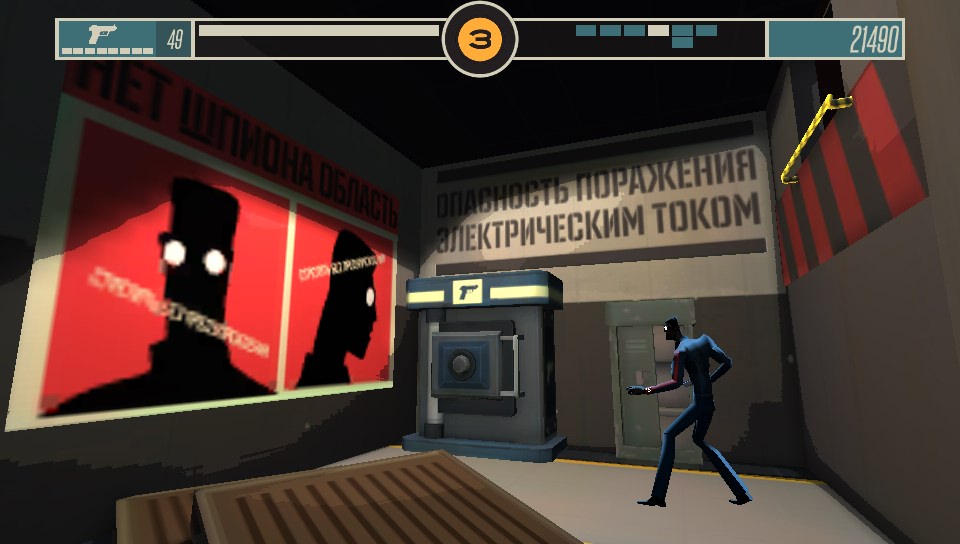 Oh, right, I forgot to mention that – the levels are randomly generated, so each mission feels unique. There are repeats of rooms here and there, certainly, but the way in which each base is structured feels totally different and the enemy patrols create new puzzles (of a sort) to solve every time. Even the inclusion of secret paths and the placement of safes/computer consoles/filing cabinets/first aid stations/etc are randomized, so while there might be a secret vent behind a stack of boxes in one room, a similar room in a different mission will just have a wall there.

Perhaps it’s my love of unique and visually arresting graphical styles. Maybe my severe weakness to anything that’s even remotely like Metroid. Could be that I’m a sucker for replayability. More than likely, though, it’s the combination of all those things that has me completely enamored with CounterSpy. It’s no exaggeration when I say it’s easily my new favorite modern take on adventure classics like Metroid and Castlevania – yes, even more so than Shadow Complex.

If you like any or all of those three games I’ve mentioned, nothing (short of not owning a Vita, PS3, or PS4) should stop you from grabbing CounterSpy immediately.