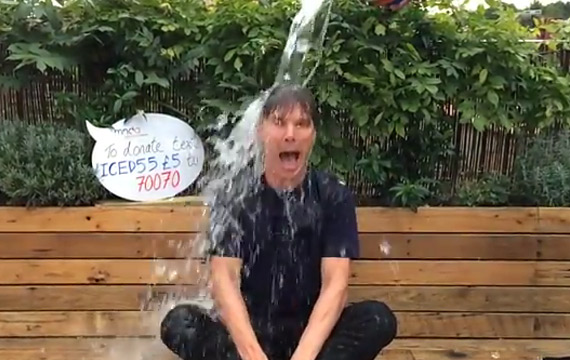 Benedict Cumberbatch has taken on the ALS Ice Bucket Challenge like no other celebrity, filming himself getting iced five times.

The actor explains he had to take the icy blast more than once because he was a day late in accepting the challenge from famous pals Tom Hiddleston and Juno Temple.

He then acts surprised when he’s doused while taking a shower following his first soaking.

The Sherlock star was also ‘caught’ while suited and making a call and while running to his car.

But the most hilarious clip comes as Cumberbatch puts his motorcycle helmet on before a ride only to find it full of icy water. As he recovers from the chilly surprise a pal throws another bucket of water at him.

Stars around the world have signed up for the Ice Bucket Challenge and posted footage of their dunks online to raise cash and awareness for the ALS Association.