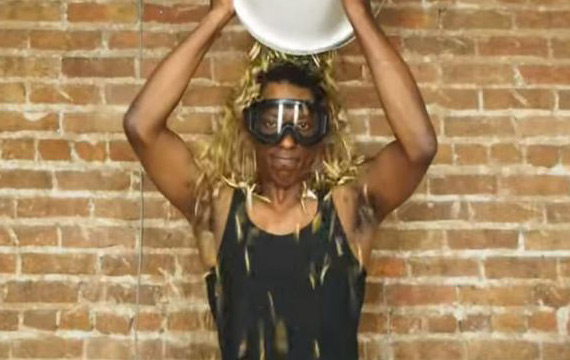 Orlando Jones is using the popularity of the ALS Ice Bucket Challenge to raise awareness about gun violence in America.

Some of the world’s biggest names, including Justin Timberlake, Lady Gaga, Ben Affleck, Taylor Swift and Britney Spears have doused themselves with icy water and posted the footage on social media as part of the new charity phenomenon, aimed at raising money and awareness for the ALS Association, which is attempting to find a cure for Lou Gehrig’s disease.

The Sleepy Hollow star commends his fellow celebrities for their efforts and has pledged to donate to the cause, but he also wants to bring attention to another issue in America – gun violence and militarized police forces.

Jones explains the controversial police shooting of unarmed teenager Michael Brown in Missouri and the escalating violence prompted by the killing in Ferguson, Missouri inspired him to speak out.

In a hard-hitting new video, in which Jones dumps bullets over his head instead of ice water, he says, “This past week I’ve watched an American city become something akin to a war zone… It all seems to stem from some sort of militarised police force threatening the rights of people to assemble (in protest).

“I’m asking something very hard of myself, I’m challenging myself to listen without prejudice, to love without limits and to reverse the hate…”

Read what Orlando wrote to accompany the video, then watch it for yourself, below:

*My heart goes out to all those who struggle with ALS but I am, of course, talking about the disease of apathy. If (and hopefully when) Michael Brown’s killer is brought to justice and convicted of 1st degree murder, it still won’t prevent this from happening again. We cannot accept this as the status quo. We MUST continue the fight at the ballot box, in the media and by working to create systemic change. I’m not naive to the dirty politics (redistricting, voter ID requirements, etc) that will try to prevent us from our goal. But I refuse to give up hope. My “bullet bucket challenge” is not about pointing fingers and it’s not about being angry. Every shell casing in that bucket represents the life of someone who fought and died in the goal for civil rights and human dignity. As a member of law enforcement (yes I really am a reserve sheriff) I will not stand idly by while others violate civil and human rights under the cover of authority and I will insist that other good cops rise to the same standard as well. As a black man I will demand more from myself and my community. I will not allow outsiders to co-opt our struggle in order to commit violence in our name. I’m channeling my outrage into action so I no longer feel powerless. It’s not about black or white. It’s not about rich or poor. It’s about us vs. them. There are more of us — from all races, genders and identities — then there will ever be of them. And we will be victorious.
“The hottest places in hell are reserved for those who, in times of great moral crisis, maintain their neutrality”