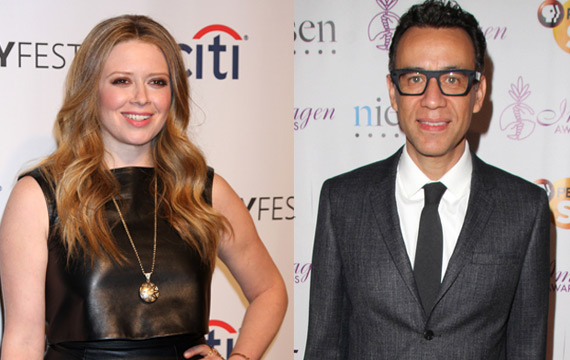 Natasha Lyonne and Fred Armisen have sparked rumors of a new romance after they were spotted locking lips while attending an Emmys after-party together in Los Angeles on Monday.

The Orange Is the New Black star joined Portlandia comedian Armisen at the Chateau Marmont after TV’s big night, and according to an eyewitness, the pair made no effort to hide a budding relationship as the actors mingled with Lyonne’s co-stars Taylor Schilling, Laverne Cox and Dascha Polanco.

The source tells People.com, “(They) shared kisses and were very cozy together.”

Lyonne and Armisen have yet to comment on the claims.

Armisen was briefly married to Mad Men’s Elisabeth Moss, but their union crumbled after just seven months and the actress filed for divorce in September 2010. The split was finalized in 2011.

The funnyman went on to date his fellow Saturday Night Live cast member Abby Elliott for a short period.