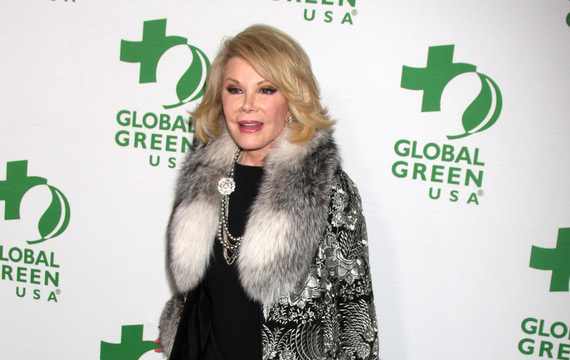 Joan Rivers’ daughter Melissa has confirmed her mom is “resting comfortably” after suffering cardiac and respiratory failure during a medical procedure on Thursday.

The veteran funnywoman was undergoing routine surgery on her vocal chords at a clinic in New York City when she stopped breathing and was rushed to nearby Mount Sinai Hospital.

The New York Daily News reports Rivers was later placed in a medically-induced coma, and doctors are planning to take the 81 year old out of the it this weekend and assess any damage.

Rivers’ daughter Melissa flew from her home in California to be with her mum in New York, and gave an update on her mother’s condition late on Thursday night.

A statement to Us Weekly via Mount Sinai Hospital representative Sid Dinsay reads, “I want to thank everyone for the overwhelming love and support for my mother. She is resting comfortably and is with our family. We ask that you continue to keep her in your thoughts and prayers.”