I like behind-the-scenes kind of things. I have spent many hours on Saturdays watching biographies about people and even the making of several movies that I have not even seen. I like to fill in the gaps that are lacking and feel like I have some sort of “inside” information others don’t know. With that in mind I recently sat down to read the book Dawn of the Planet of the Apes – Firestorm and was pleasantly surprised. What I found was exactly what I was looking to find; the rest of the story.

The 2011 film Rise of the Planet of the Apes ends with the apes winning a large battle on the Golden Gate Bridge and the beginning of a viral release. This year’s Dawn of the Planet of the Apes starts years later after the collapse of human civilization from the viral outbreak? So, what happened in the time period between? That is exactly what this book sets out to answer.

Without giving too much of the plot details I will give only a very cursory description of the novel. The book has three stories happening throughout that interweave and make sense in the big picture. The first is the story of Talia Kosar, a doctor working in the emergency room when the viral outbreak begins. Her life take a major turn not only from the outbreak but when a reporter ex-boyfriend shows up at her apartment with a gunshot wound that stems from his investigation into the “Money-gate” incident on the Golden Gate Bridge. At the same time, there is a game of cat-and-mouse taking place in the nearby woods between the group of escaped apes and a mysterious military contractor that has been brought in for unclear reasons. The final story is that of former Chief of Police Dreyfus who is now running for Mayor and is trying to figure out how everything ties together. It’s a very cohesive story and nothing ever seems to be included without a clear purpose.

What I think is probably the strongest component of the book, which you cannot find in the movies, is that it gives much insight to the thoughts of the characters. This is especially beneficial on the parts of the apes. We are able to “read” their thoughts and memories and get a much stronger understanding of their history and motivations. It really adds a level of complexity and empathy to the books that is very difficult to convey on film.

Book Review: Dawn of the Planet of the Apes – Firestorm 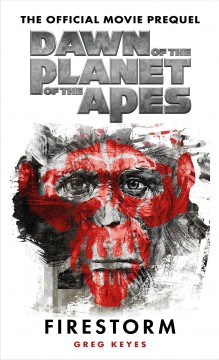