No Good Deed, starring Academy Award nominated Taraji P. Henson and Golden Globe winner Idris Elba, premieres in theaters tomorrow and we had the chance to chat with her about the new thriller.

In the film Taraji plays Terry, the mother of 2 young boys who recently left a high-level career as an assistant D.A. to become a stay-at-home mother. One night she’s home alone with her sons when Colin (Idris Elba), appears at Terry’s door claiming car trouble and asking to use her phone. Charmed by the charismatic stranger, she leaves him outside while she goes to get him a phone, but soon learns that no good deed goes unpunished. The next thing she knows, Terry is being terrorized inside her home by a vicious sociopath. What Colin doesn’t realize, is that Terry may have the wits and strength to outsmart him at his sadistic game.

The film is unique in many ways, one of them being that it’s a thriller that stars 2 African-Americans and when asked about her thoughts on the lack of African-American thrillers in theaters and how to change that pattern Taraji replied, “We really had to fight to get this made because there hasn’t been any and again people would say ‘Ahh, I don’t know it’s never been done. It’s uncharted territory’ but somebody has to take a risk. I think they were smart for doing this because now big Sony is like ‘Oh my gosh! Yeah!’ Everything is about casting and scripts. If the material is good, people are going to go. They don’t care what color the cast is, you know?. We literally had to fight for this. They were like ‘No just do a comedy!’ and Will [Packer] was like ‘No I will not do a comedy! Not with these two actors. You have a Golden Globe winner, an Academy Award nominated actress. These are respected actors in the game. They could totally do this.’ I’m so glad we fought because this is the beginning. This is the beginning.”

She also reflected on why she had a personal interest in the project saying, ” I was thinking to myself ‘When’s the last time I saw a woman stand up for herself and not play the victim in a thriller?’ J. Lo in Enough, Julia Roberts in Sleeping with the Enemy, and that was how many years ago? It’s time! It’s time and I think women, I don’t care what color you are, mothers everywhere will identify with Terry.” 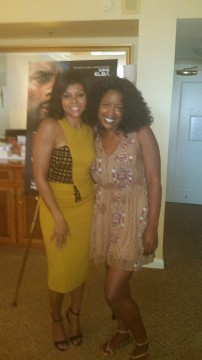 Interestingly enough, Taraji actually isn’t a fan of the thriller genre. “I’m a scary-poo, I’m a chicken-boo all of that. I don’t like nothing that makes me scared, make me have nightmares. I decided to stay in a 5 bedroom house by myself while filming a thriller. We did all night shoots so imagine me coming home and my assistant is leaving me. She’s like ‘Okay, I’ll see you tomorrow!’ and I’m like ‘Wait , wait! Do you want to spend the night!’ and there was this one room in the house that was locked and I swear to God Jason was behind there. There was this long hallway to get to my bedroom and it felt like The Shining so I would literally run the house, lock the door, set the alarm, run down the hall close the door and put a chair under it and go to sleep with the covers over my head! I will never do that again! That was so dumb!”

Now many of you wanted to know what it was like for Taraji to work with Idris Elba and she joked that “He’s ugly and he has a dumb accent!” She then continued, “Idris is great. He is very charming, very charismatic which, to me, charming, charismatic people make the best bad guys because secretly you kind of want them to get away a little bit, you root for them. You don’t want to play a bad guy that everyone hates anyway because then you lose the audience. So I thought that was very important, who we cast as Colin because we didn’t want people to actually hate him. We want to see why he ended up like that…I really enjoyed working with him though.”

Taraji is a beacon of positivity and determination, making her a role model for many young Black women, the pressure of which Taraji won’t allow to control her. “I don’t put that kind of pressure on myself. I have respect for myself. I have morals and values, so it’s not that I have to prove anything to anybody. This is just who I am, you know? I have a son first-off, so there’s certain things that I can’t-you know my child has to respect me. If he’s going to go out into this world and respect women, it starts with his mother so that’s where I- it has nothing to do with ‘I have to be a role model’. I can’t raise everybody’s child and I am human, I am flawed and just as screwed up as the next person, so if someone decides to choose me as a role model, I’m honored. But do know that I am not perfect.”

You can watch the No Good Deed trailer below and be sure to go see it when it opens in theaters tomorrow!

Taraji P. Henson Talks 'No Good Deed,' Being a Role Model and More