The Maze Runner is out in theaters tomorrow! Two of the film’s stars, Will Poulter and Kaya Scodelario, took some time to share their thoughts on the newest teen post-apocalyptic thriller to hit the big screen.

The film follows a young man Thomas (Dylan O’Brien), who is deposited in a community of boys after his memory is erased, soon learning they’re all trapped in a maze that will require him to join forces with fellow “runners” for a shot at an escape. Will Poulter’s character Gally is a foe of Thomas’ who just wants to maintain order within the Glades and not focus on escaping. Then there is Kaya Scodelario’s Teresa, who proves to be quite the enigma, not only being the only girl in to be dropped into the Glades (and supposedly the last ever), but also because she and Thomas have a strange connection that they can’t quite put their fingers on.

The Maze Runner was filmed in Baton Rouge, Louisiana, a town known for its sweltering heat. Will and Kaya hail from across the pond in England, so when asked about how filming in the South was for them, Will replied, “It was great! I love the South. It was kind of my second time doing it. I think Southern hospitality really exists, and it’s something we really experienced in abundance. The people are so friendly, the food’s insane.” (Wherein Kaya interjected, “Ugh sooo good!”)

“It’s just crazy hot,” Will continued, “Louisiana was madness. It was like 108 [degrees]…but that was actually all apart of the challenge of shooting, and we embraced that. It meant our were jobs easier in a way because we weren’t faking, it was for real.”

“I love it,” Kaya chimed in, ” It’s definitely one of the most interesting places I’ve been in America. I find LA weird. I find LA a bit boring. In the South, I just love it. You can feel the culture, feel the history. Everyone’s got stories to tell, and people are so friendly. I felt so at home.”

When asked about what drew each of them to their characters, Will straight up admitted that, “I wanted to play the dick. I really did, like I wanted to play a guy who was less likable and to me someone who was very, kind of, layered. He’s a very complex individual. I think deep-rooted behind the whole kind of tough guy exterior is a lot of fear and some quite cowardly motives. That was interesting to me, to play someone who’s kind of so in-denial about who he was. Someone who defended not only who he was but also his home so defensively. He’s a very territorial individual and almost animalistic in that sense. This project is a very fresh take on a trending theme of movies. It’s a very unique story and to work with all these people like Kaya, to work with such an awesome group of young, up-and-coming actors. It was really exciting.”

As for what drew Kaya to Teresa, the actress explained,” I liked a lot of things about her. She’s a mystery. You don’t find everything out about her. I like that it’s kind of a journey. You have to commit to the three stories to really get who she is. I like that she makes certain decisions that a lot of people won’t agree with. It’s very human. I don’t know for some reason, we’re kind of scared to see a woman like that in film sometimes. We want them to be softened, we want them to be delicate and do the right thing, and I like that she doesn’t follow that pattern. When she arrives she’s not shaking hands and wanting to make friends. She’s straight away like ‘Who the f*ck are you guys? I want to get out of here. I don’t want to meet you. I don’t want to go on a date with you. I want to know who I am.’ I love that focus! I love that bravery and strength in her, and I can’t wait, if we get to do the second book, I know that she has to make this decision, and a lot of people are going to be really angry with it and not agree with it. I think to get to explore that as an actor is really great, because I don’t even know if I’m going to agree with her, and I’m kind of interested to see how I can work through that, and what I can bring to that.”

The Maze Runner premieres in theaters tomorrow, and if you’re in the Atlanta area, you can watch it for the first time with cast members Jacob Latimore (Jeff) and Blake Cooper (Chuck). Keep reading below for details, then check out the trailer! 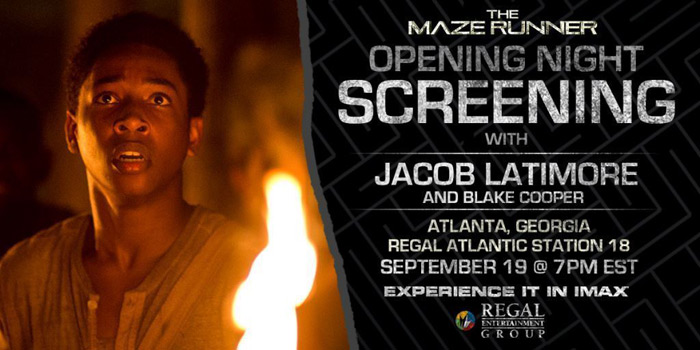 WHO: Atlanta’s hometown talent Jacob Latimore (Jeff) and Blake Cooper (Chuck) will be attending an opening night showing of their film, THE MAZE RUNNER exclusively at Regal Atlantic Station with a Q&A directly afterwards. The Q&A will be moderated by V-103 morning show personality Ryan Cameron.

WHAT: This is a ticketed event and fans can purchase movie tickets here: http://fox.co/TMRAtlantic