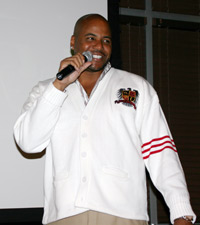 The Walking Dead may be wrapping filming in Atlanta this week for the year, but that doesn’t mean that the cast is done promoting the series for the year! Numerous cast members have been making appearances on various talk shows and events in promotion of the series. One of those cast members, Vincent Ward ( who plays Oscar on the hit TV series ), hosted a private meet and greet reception this past Friday night in support of the Combined Federal Campaign (CFC), an employee-driven federal program. The program collectively raises funds from local events held throughout the year in benefit of approved charity organizations.

During the event, Ward took questions from fans, giving us a look inside his experience on The Walking Dead. The very first question came as no surprise considering the lost of two main characters on the series just a couple episodes ago.

Is there any kind of warning if your character is going to be killed? Ward confirmed that you do get a phone call letting you know, and that the producers are also pretty good at letting you know that if you’re about to buy something big…. that you know, “You might not want to get that.”

While Ward couldn’t comment on upcoming storylines, or if his character is still around (though we can speculate if he’s still in Atlanta this late in filming for the season – he’s probably in the clear), he could tell us a bit about his early involvement in the series.

“I had never seen the show. Not one episode.” Ward answers when one fan asks if he was a fan of the series before he auditioned.

“I had a friend that said I should audition, and I said nay man I’m cool.” Ward continued, “It wasn’t until my 4th episode that I watched the series.”

Ward seems to be a big fan of his Walking Dead experience now however. He had nothing but praise for the cast and crew of the series saying that, “Everyone is so down to earth.”

Ward also admitted that his first day on set, he thought his name was Mouse. “The give you fake names and fake scripts.” Ward explained. “They have to make sure you’re legit.”

So what did Ward think about that game-changer episode a couple weeks ago where we lost two characters? He admitted that he actually didn’t know that there was a boy or baby on the series, as he hadn’t shot any scenes with them.

“Here comes this boy with a gun and then a baby,” Ward joked. “I thought man, they’re really secretive on this show!! I was real confused!”

Ward also left event attendees with some insightful advice for those that are interested in pursuing a career in acting, but really his advice applies to all of us.

“Be ready, so you don’t have to get ready.” Ward answered.

The event, organized by Savvy Affairs this year, has been a federal tradition since the early 1960’s. Walking Dead fans, federal employees, supporters and members of the community had the opportunity to meet Ward and were also able to enjoy performances by a talented group of young people including Young Voices United, the Femme Fatale Dance Crew, and a ‘one of a kind’ fashion show by Amy Cooper of MsLadyCouture. And of course, there was Walking Dead trivia hosted by Ward himself.

FanBolt had a wonderful time at the event and was honored to be able to attend!

'The Vampire Diaries' 4.06 Review And Recap: We All Go A Little Mad Sometimes