‘Doctor Who’ 8.03 Episode Recap and Review: Robot of Sherwood 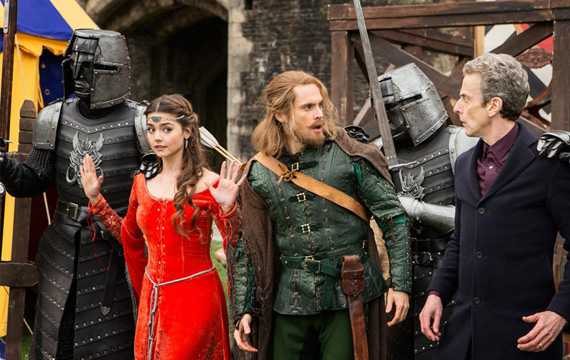 The Doctor is letting Clara pick the destination this time. Like many of us who grew up watching anthropomorphic foxes before graduating to Kevin Costner and Cary Elwes, Clara has always wanted to meet Robin Hood. Unfortunately, says the Doctor, there’s no such man. Robin Hood never actually existed, and the Doctor is going to prove it by taking Clara to Sherwood Forest. And because this would otherwise be a very short and oddly-named episode, upon opening the TARDIS doors, the Doctor immediately comes face-to-face with the legend himself.

Robin wants to take the Doctor’s magic blue box for the good of the people of Sherwood, which leads to a rather adorably epic sword vs. spoon fight (oh, to have been that fight choreographer…). The Doctor wins, thanks to a neat little trick that couldn’t possibly have any significance later in the episode. Psh! Robin takes the loss with good grace, largely because he’s a hero and the lovely Clara is watching.

Just a bit later, Robin introduces a starry-eyed Clara to the rest of the Merry Men as the Doctor tries desperately to figure out what’s really going on. All of them register as human, with the right dirt and diseases of the era (poor Alan A Dale). What remains odd is that even the weather is fairytale-like. The trees are too green and the sun too bright, not to mention that the Doctor and Clara have arrived just in time for the Tournament of the Golden Arrow – one of the most important events in the legend.

Of course, Robin Hood splits the arrow of the cartoonishly evil Sheriff of Nottingham. However, before he can claim the prize, his own arrow is split by the Doctor’s. The two of them duke it out on the archery field before the Sheriff and Prince John tire of the display and have the two of them arrested. The big battle that you see in every Robin Hood movie ensues, and the Doctor, Clara, and Robin Hood get themselves thrown in the dungeon (intentionally, of course).

Meanwhile, something more sinister than tax-collecting is going on down in that same dungeon. Arrested peasants are being worked to the bone, then killed when their usefulness is at an end. The guards watching over them are some sort of robot and they’re forcing the peasants to create giant gold circuits. No good can come of this.

In their cell, the Doctor and Robin Hood are practically measuring their… sonic screwdrivers while Clara rolls her eyes and tries to come up with an actual escape plan. An eavesdropper set by the Sheriff pegs her as the ringleader and takes her to the Sheriff’s lair. Once there, she fakes and flirts her way into the entire story. A ship crashed in Nottingham a few months back. The Sheriff plans to help the robots repair it in exchange for their backing on your basic World Domination scheme, and he wants Clara as his Queen Consort.

Robin and the Doctor finally manage to get out of the cell on their own. They locate the bridge of the ship, which has disguised itself as the entire castle. Ominously, the ship’s destination is listed as “The Promised Land.” The Doctor thinks that Robin Hood is in on the whole thing, but Robin denies it. Their argument is interrupted by the Sheriff, Clara, and a whole mess of robot guards. Robin grabs Clara and leaps into the moat to save himself (and her).

As it turns out, the engines of the ship are too damaged to be fully repaired. Once they reach full power, the ship will explode and take half the English countryside with it. The Doctor stages a peasant revolt, using golden plates to reflect the guards’ laser beams back at them. Robin and Clara arrive back at the castle in time to help. Robin, of course, gets into the obligatory epic final battle with the Sheriff, finally using the Doctor’s move to trip the villain into a vat of molten gold.

Regardless of the Sheriff’s demise, the robots start building power in the engines and achieve liftoff shortly after all of the humans (and Time Lords) escape. Now the only way to save England is to ensure that the ship makes it out of the atmosphere before it blows, but there isn’t quite enough gold in the system to make it happen. The Doctor, Clara, and Robin Hood team up to fire the Golden Arrow into the ship, which does the trick!

As Clara says her goodbyes, Robin and the Doctor have a talk about what it’s like to be a legend, whether you want to be one or not. Robin tells the Doctor that they best they can do is try to be the kind of man who lives up to the heroic image, and hope that the stories do more good than any one individual can.

Okay, so this episode was cheesy as all get out, and I loved every second of it. Seriously, this has joined the list of episodes that I watch when I’m sick and stuck on the couch. (Also on the list, hits such as “Shindig” from Firefly, “The Blue Butterfly” from Castle, and “Savage Seduction” from Warehouse 13. Nothing makes me feel better like those shows!) I’m not sure the episode really fit the tone that they’re trying to get with Capaldi’s Doctor – it felt more like a Matt Smith episode to me. Regardless, it was a fantastic romp and I will be watching this one many more times. So there.