While Super Smash Bros. 3DS has released in Japan, American 3DS owners won’t be able to get their hands on the full game until October 3rd. However, Nintendo gave a select group of players in the States an interesting way to try out the demo before the general public can download it. Platinum-status members from last year on Club Nintendo who met certain criteria were sent codes to use and share with friends, allowing them to get an early taste of what’s to come in the finished product. I’ve played a lot of Smash over the years with all three previous games, especially Super Smash Bros. Melee on the Nintendo GameCube, which served as one of the go-to multiplayer games for my friends and I for some time (and still is to this day). So naturally I was happy when I received a code from a friend, knowing that I’d have a shot at trying the game out early. I plugged in the code I received, then dove right into the demo for Super Smash Bros. 3DS instantly after it finished downloading.

Upon booting up the Super Smash Bros. 3DS demo the first thing I noticed was just how much was locked away. You still go through the menu as you normally would, but your only option is to do just your standard versus matches in single player or local multiplayer. Once you get to the character select screen, the entire starting roster is displayed, with a majority of the cast shaded out. Demo players only get 5 choices of characters to work with; Mario, Link, Pikachu, Villager, and Mega Man. While the characters I really wanted to try out the most were a part of the massive, shaded-out portion (Little Mac, Palutena, and Zero Suit Samus specifically), I was still able to at least get a feel for the game, and that was what was most important to me. You also have just one mode of play, 2 minute timed matches. Stock isn’t an option here. In terms of stages, only Battlefield is available in the demo. You also have access to an Omega version that turns Battlefield into a Final Destination-like variation to play on by removing the three stationary, floating platforms. 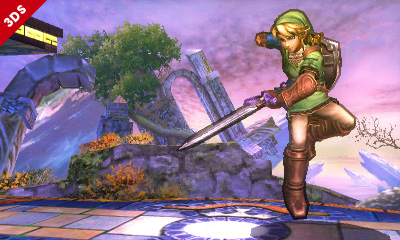 As I said earlier, my main concern was how the gameplay felt to me.  Of the first three games, Melee was my favorite primarily due to the speed it had, and Brawl was my least favorite because it felt like it was lacking a bit in that department, as well as the random tripping thrown in which would completely halt my momentum briefly. I still enjoyed Brawl to a degree, but not as much as the first two installments. Given the previous game I was, admittedly, a little bit concerned of how Super Smash Bros. 3DS would play. I’ve seen gameplay footage before but I wasn’t ever able to attend any of the events it was playable at before this demo. After playing it for an extensive period of time, the game feels somewhat like a comfortable balance between Melee and Brawl. The hardcore Melee fans looking for a second coming won’t find it here, but the pace of the game is still enjoyable. I can easily see myself playing the full version of Super Smash Bros. 3DS more than I played Brawl.

The very first characters I tried out were the playable newcomers, Mega Man and the Villager. I never was a huge fan of playing as Mario, Link, or Pikachu in earlier games but I tried them out here as well. Mega Man personally took some getting used to because he shoots his Mega Buster for his neutral A button attack, rather than a basic melee attack like most characters. I did enjoy the rest of his moveset however, and his specials all seem pretty solid. Mega Man also has my personal favorite Final Smash of the bunch. As a Mega Man fan, seeing all the various incarnations of the blue bomber together for the first time in gameplay as opposed to just watching videos of it was very satisfying. My favorite character from the demo overall is easily the Villager. The ability to pick up enemy projectiles and other items and send them back on your own is neat, and his other specials are great too. His down and side specials are some of my favorites of the entire demo, and it feels like I even got more mileage out of his normal attacks than some of the other characters here. 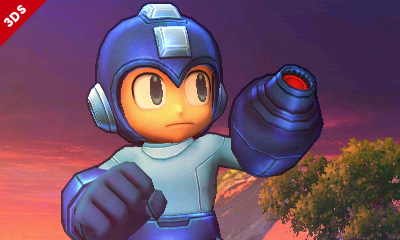 It is a little disappointing that you can’t go into the options, specifically for two options. One option I wish I could change is the ability to disable jumping via the analog stick (a setting introduced in Super Smash Bros. Brawl on the Nintendo Wii), and the other is the ability to increase the thickness of the outlines of the fighters. The former helps prevent accidental jumping when trying to do up-tilt attacks, while the other allows for a little more ease in seeing where your character is during the fight. At times in a 4 player match there can be so much on screen that it can be hard to keep track of where you are, so having this as an option in the demo would have been nice. These can be changed in the full version, but it is a little bit of a bummer that it’s impossible to do so here.

The demo for Super Smash Bros. 3DS serves as a nice appetizer for the game.  It doesn’t have much to experiment with, but at the very least it’ll give players a feel for what to expect. Overall this little taste of what’s to come has me very excited. Not having those characters I wanted to use makes me only more excited to try them out due to the waiting involved, actually. Growing up I never would have expected a portable Super Smash Bros. game to be a thing, but not only is one on the horizon, it plays very well and manages to work around the system limitations even with compromises (Assist trophies and Pokeball summons are at a reduced framerate, for example, to keep the actual gameplay at full fluid speeds). Smash fans should be in for a good treat as long as they aren’t expecting Melee 2. It feels like a middle ground between Melee and Brawl and to be honest I’m very fine with that.