I’m always looking for ways to enhance my first computer build which was originally placed in a cheap Cooler Master case and ran with 4×4 16GB 1600MHz Corsair Vengeance ram. Both the case and the memory were fine options at the time, but I was soon ready for some improvements in both of those areas. Thus I sought after replacing those two items and adding some extra light in both areas.

Replacing the old Cooler Master case out with something new was the first thing I wanted to do, and I decided to see what options Rosewill had for a new case since I had previous experience with the company’s Thor case. It didn’t take long at all for THRONE-G-Window Gunmetal full tower case to visually impress me. It looked gorgeous and fit the bill for what I had envisioned. 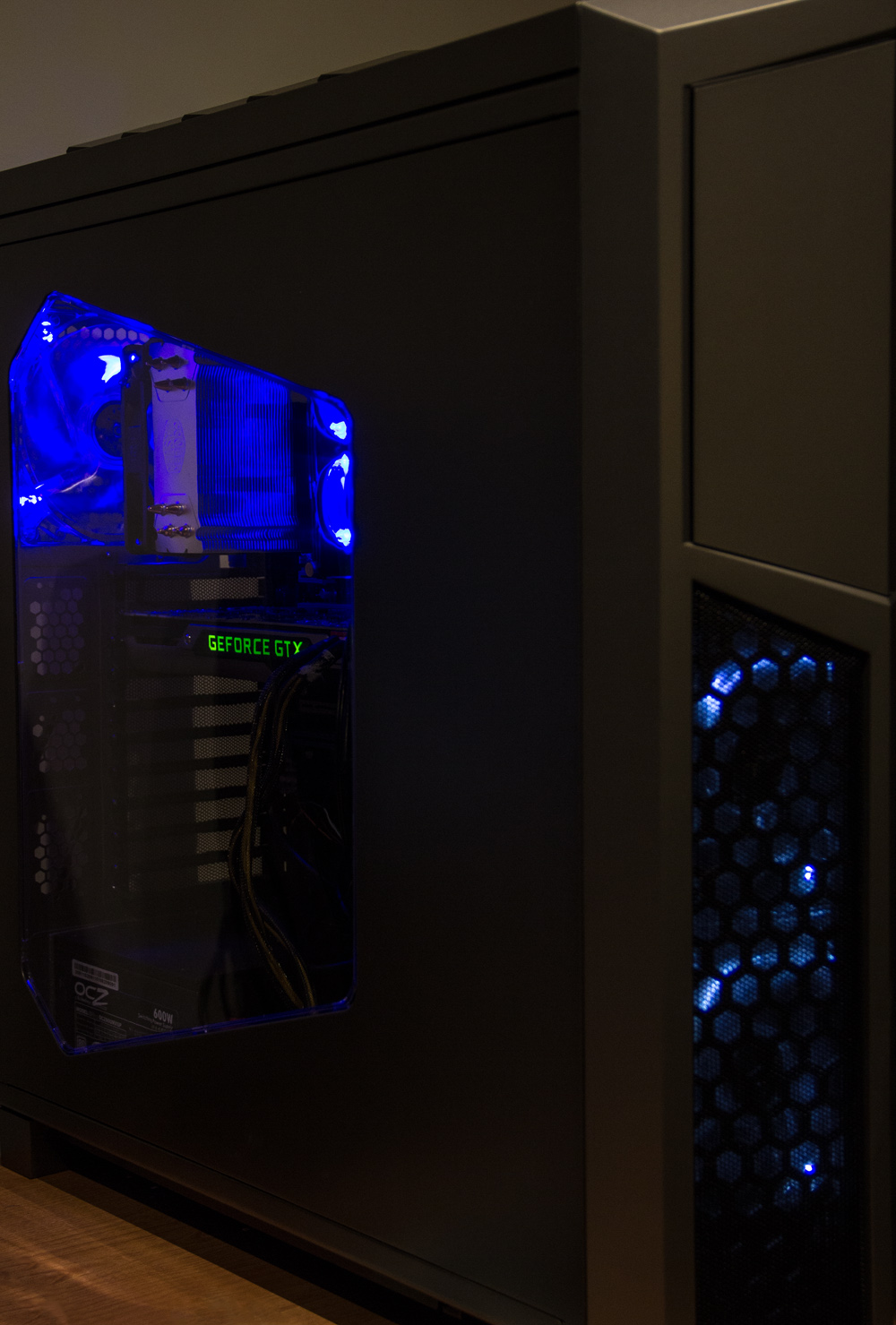 As soon as I pulled out the Throne case I immediately fell in love with the gunmetal color, shape, and window size. It also has two white LED fans on the front ventilation which look great and complement the gunmetal color of the case.

The window view is also brilliant looking, but that’s especially so because I decided to go with the white HyperX Fury 2x8GB 1866MHz Memory from Kingston. However, I didn’t stop with just the memory as I got the HyperX Fan to go with it that fits over the top of the memory. The two miniature fans sport a blue LED that really lights up the inside of the case and shines nicely on the white HyperX memory. Talk about a perfect addition for the window view!

Since I went with the memory fan from HyperX which has the blue LED lights, I decided to customize the Throne case a bit more with a blue LED fan on the back ventilation of the case by adding the Rosewill RFTL-131411B. It’s a great fit, especially since the light from both fans are blocked from each other by the large Cooler Master Hyper 212 Plus cooler.

I continue to become a bigger fan of Kingston and its HyperX products as it’s not only the memory that I’m impressed with but also its HyperX 3K solid state drive that I added to the PC. I should mention that this is the first SSD I have used, but I can’t see how I could have gotten anything better as it’s purely amazing how quickly my computer now starts up and loads programs. I love the speed and can’t believe I waited this long to add an SSD to my PC. And by the way, for those who missed it, I’m even a fan of the HyperX Cloud Gaming Headset that I reviewed a few months back.

Everyone needs a little HyperX in their PC building lives!

Overall I couldn’t be happier with the Throne full tower case. It’s big, but it looks fantastic and features seven fans and roof ventilation that keeps things very cool on the inside. The HyperX additions have also been perfect for my PC with the increased performance and incredibly stylish looks of the memory, and also the bright blue and cooling effects from the HyperX fan. I couldn’t be happier with these PC upgrades!

Check out some of the photos below, along with more information about each product.