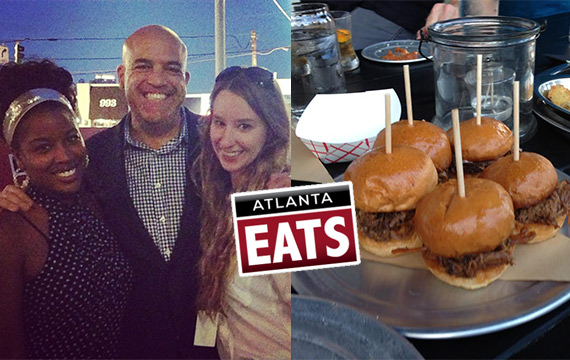 There are few things that FanBolt loves as much as entertainment and food, so we were super excited to attend the 2nd anniversary party of the local show Atlanta Eats at Bellwoods Social House. We had the chance to dine on some amazing small plates from the newly opened restaurant – mini lobsta rolls, hog leg slider, and fried pickles (my personal favorite)! We also fell in love with their drinks – so many amazing cocktails to pick from (highly recommend their Manhattan)!

As we nibbled on the tasty dishes, we also heard about host Steak Shapiro’s upcoming series with Food Network, Food Truck Face Off (which premieres Sunday, October 12th at 8 ET/PT). We also got to hear about the restaurants that would be partaking in Atlanta Eats Live! If you’re an Atlanta foodie, then you need to be at this event on Sunday, October 5, 2014 at Verizon Wireless Amphitheatre at Encore Park. We have all the details for you below!

Doors will open at 5pm – and it’s all you can eat until 8pm! Then, at 8pm, Yacht Rock hits the stage until 10pm! And to top it all off, Yacht Rock will be performing an all food-theme set for the first time ever with songs such as “Cheeseburger in Paradise,” “Pour Some Sugar On Me,” and “American Pie.”

Atlanta Eats Live! has also finalized the list of participating restaurants, which ranges from the winner of Southern Living’s Best New Restaurant for 2014, Kimball House to Buford Highway favorite Gu’s Bistro. The full list is as follows:

Tickets are now on sale at all Ticketmaster outlets, online at www.ticketmaster.com, by phone at 1-800-745-3000, and the Verizon Wireless Amphitheatre at Encore Park box office. Visit: www.vzwamp.com and www.atlantaeatslive.com for additional information.

FanBolt is also giving away tickets to the event! We have 2 passes as well as a parking pass that will go to one lucky reader who shares this posting on Facebook and gets the most likes! So head over to FanBolt’s Facebook page – find this posting – and share it with your friends!

'Doctor Who' 8.03 Episode Recap and Review: Robot of Sherwood