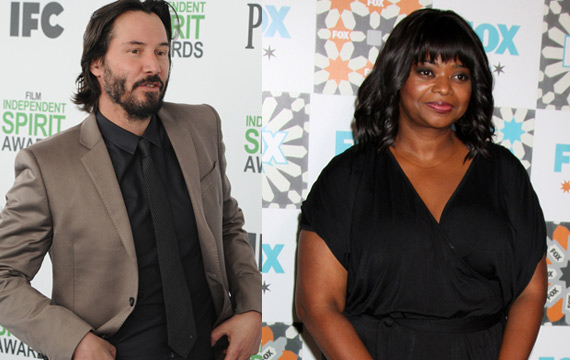 Octavia Spencer is a lifelong fan of Keanu Reeves after he unexpectedly gave her a helping hand when she was left stranded in her car just after arriving in Los Angeles.

The Oscar winner moved from her native Alabama to Hollywood to pursue a career in acting, and when she was on her way to one of her first auditions, she was dealt an untimely blow when her car broke down on one of Los Angeles’ busiest streets.

She recalled the incident to Meredith Vieira on her talk show on Wednesday, saying, “No one would help me because my car was so dirty – I had been parking my car underneath a tree so birds were just having a field day all over my car and I never washed.

“It wasn’t until Keanu Reeves came by. He was on a motorcycle, wearing his motorcycle helmet and sunglasses and I didn’t recognize it was him when he pulled over. And he was like, ‘Hey, do you need some help?'”

Spencer was planning on having the star get in the car while she pushed it to the side of the road, but he refused and pushed the car himself.

She said, “I was so mortified. I was like, ‘Oh no, hes gonna touch my car!’. And I was looking terrible, I had a shirt with holes (in it), I wasn’t wearing any underwear.

“So to this day, I go to his movie every opening weekend, because that was a sweet thing to do. But I will never remind him of that moment because when I say I was looking foul, I don’t want that memory to come back (to him).”