Last Friday marked the opening of Halloween Horror Nights 24 at Universal Studios Orlando, and I flew down to Orlando to check out what all they put together for this year. While Mother Nature was not on our side (it rained the whole night), the drizzle and fog actually added to the haunted atmosphere. Once we arrived at the park, we were escorted to a welcome reception where we got to dine on delicious finger foods (pun intended) and drinks! As we mingled with other press and the creators of the event, we were creeped on by a few “scareactors” – who did a great job at scaring me a number of times.

The creators of HHN24 were on hand to answer media questions and chat with us about the effort that goes into putting everything together each year.

“The biggest challenge in putting together Halloween Horror Nights 24 would have to be making sure that this year’s content is diverse. Some years, we are able to work under one certain thematic and create content around it, but this year, every part of the event is unique,” Michael Aiello, creative director of Universal Orlando’s Halloween Horror Nights, revealed. “Every year, we up the ante in the amount of detailed content we’re offering, so our biggest challenge is going above and beyond to fulfill the promise of an incredible experience for our guests.” 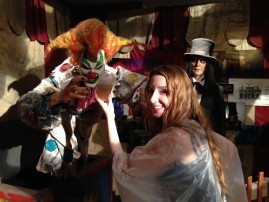 Personally, I was most excited for their Walking Dead haunted house. I’m not sure there’s much speculation left with fans as far as what is going on at Terminus. I think we all kind know what that place is about at this point, but just in case you still had a few questions – HHN24’s house will answer them.

This was definitely the most impressive house to me. There are two casts of 60 “walkers” in the house, which means that they’re creating 120 “walkers” every night.

The attention to detail is really incredible – and there are many little Easter Eggs that await fans of the series. For example, Herschel’s head is outside the entrance to the house. I barely got a photo of this – they were moving us along fairly quickly but you can make it out in the picture here. 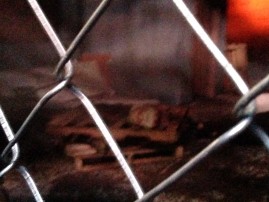 “There are several Easter eggs hidden through all of Halloween Horror Nights 24. It’s one of the things we enjoy doing as the creators of event – putting tiny details in that hardcore fans or even people who take a lights-on tour of the houses may notice. For example, there is an ashtray in the burning shack room of The Walking Dead: End of the Line that we noticed while watching the show that we decided to recreate,” Aiello revealed to FanBolt. “There is also a photo of one of our project managers inside the Big Spot. There are even more Easter eggs inside The Walking Dead: End of the Line and throughout the event, but I don’t want to ruin the fun of guests finding those themselves.”

This year’s Halloween Horror Night experiences are inspired by: 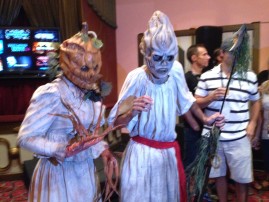 It’s not hard to see why Halloween Horror Nights has been named “Nation’s Best Halloween Event” for not one or two – but SEVEN straight years. The award comes from Amusement Today’s Golden Ticket Awards, and it happens to be one of the most prestigious awards in the amusement industry.

Tickets are on sale now and can be purchased online at HalloweenHorrorNights.com/orlando. Guests can also book a Halloween Horror Nights hotel and ticket package that includes event tickets, park-to-park tickets and accommodations at a Universal Orlando hotel so you can stay right in the midst of all the action. Due to the event’s popularity, tickets for weekend nights are expected to sell out and should be purchased well in advance.

I also should note that I got to stay at Universal Studios’ newest hotel – Cabana Bay, which felt like I was vacationing in a Mad Men episode. I highly recommend the resort if you’re heading down to Florida for theme park goodness – they have incredible rates plus early park admission to The Wizarding World of Harry Potter (a full hour before the theme park opens)!

I’d like to thank Universal Studios Orlando for their hospitality in having me down to check out Halloween Horror Nights – I can’t wait to see what they have in store for next year!