Warriors Orochi 3 Ultimate serves as the all-in-one super version of the fourth installment in Koei’s Dynasty Warriors and Samurai Warriors crossover series (behind 1, 2, and the Japan-only Musou Orochi Z). Warriors Orochi 3 has been released on quite a few platforms overall through various versions, with the original version on the PlayStation 3 and Xbox 360 to start. After a Japan-only PSP port and an enhanced Wii U release, Ultimate serves to be the true version of the game with even more content additions this time, and also releasing for the first time on the PlayStation Vita, PlayStation 4, and Xbox One. Having gotten to play the Vita version for this review, I can definitely say I’ve had a blast with the game, and it’s packed with quite a few features  to keep the gameplay flowing even after beating the main story.

Taking place some time after Warriors Orochi 2, a mysterious monster known as the Hydra appears, helping to start a new massive conflict. With the world on the brink of destruction, warriors Sima Zhao, Ma Chao, and Hanbei Takenaka attempt to launch a last ditch attack on the massive beast. The attack turns out to be a failure, but the trio are saved by the divine Kaguya. With Kaguya’s help, the trio travel across time to build up their army and eventually recruit enough warriors and resources with the common goal to drive the Hydra out of existence, as well as the appearance of fragments of Orochi himself. Along the way they fight and meet up with friends and enemies, as well as unlikely faces like Achilles and even Ninja Gaiden‘s Ryu Hayabusa, among other guest fighters.

As you control the various Dynasty Warriors and Samurai Warriors characters, as well as the multitude of guest characters, your controls here are based on the Musou standard. Combos are primarily done with light attacks via Square and charge attacks via Triangle. The R button allows you to use a portion of your meter for a special attack, while having it full will allow you to use the trademark Musou attack with Circle. You can jump with the X button but your air combat options are limited. You can’t do any air combos, just your choice of a light attack, charge attack, or air special. You can either switch between your three-character team via the rear touch panel (which can be changed to the front touch screen via the options, an option I changed first as soon as possible) or you can press Down on the dpad to have your remaining two characters join you and fight simultaneously with the AI picking them up for use. Calling out your partners allows for a special combined Musou attack, but your partners can only recover health and special meter when they aren’t active at the time, so it’s important to balance when to use this mechanic. Another multi-character tactic you can use, if you filled up the blue-like-colored True Triple Attack gauge. The True Triple Attack, activated by pressing both character switch commands simultaneously, will slow down nearby enemies as you and your partners can attack your many foes, ending with one big attack. Players have plenty of options on how to take out enemy soldiers and generals, and they’re all fun to use. 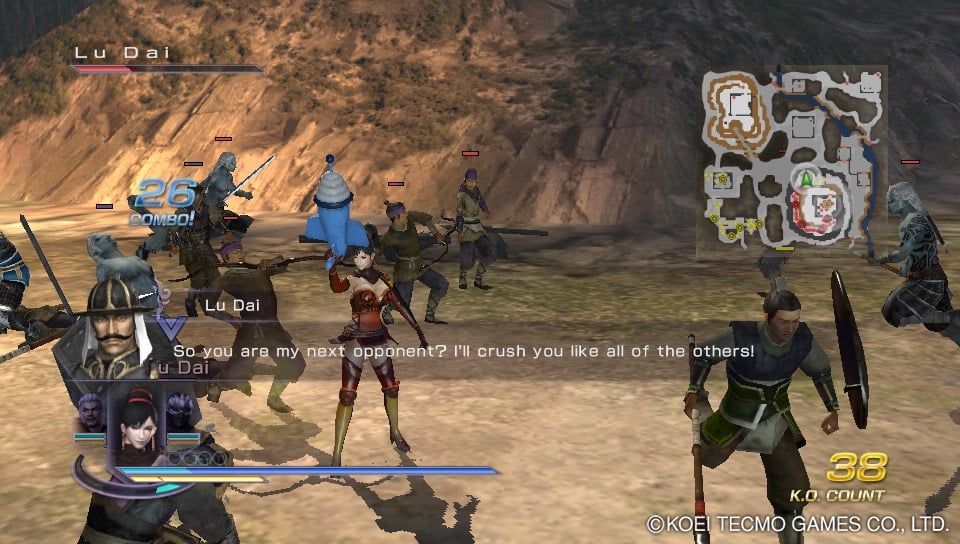 While Warriors Orochi 3 Ultimate always gives you a recommended character team in the main story for each level, you can use your own team of three people as well. The benefit to the recommended teams is that you can test out more people over the course of the game, but you don’t have to use them if you don’t like some of the characters there. There’s no penalty to rolling with your own team of three. For most of the game once I unlocked them, I went with a three-fighter combination of a select pool of fighters I came back to from time to time like Masamune Date, Ryu Hayabusa, Sun Jian, Lu Bu, and Lianshi, mainly because I found these to be some of the most enjoyable for me to use. Eventually you’ll use a character enough to hit the level cap at level 100, but what you can do after that is promote your warrior. Upon promotion, their level drops back down to 1, but they obtain a new attribute and other perks in the process to those who promote their characters multiple times. This is part of what helps the game’s longevity, as these levels carry over to the other gameplay modes too.

Originally added in the Wii U version, the Duel mode returns here, allowing for two teams of three to engage in a fighting game-like environment. You can use various cards in this mode to attack the opponent, impede them, support your characters, or other special functions. Duel also has a survival mode variant where you keep fighting teams of three enemies until you lose. Musou Battlefields mode was present in the original release of Warriors Orochi 3, but it’s been upgraded in Ultimate. The mode allows players to take maps from the main story mode and modify them by changing some of the involved officers on all sides of the conflict, changing the music of the fight, altering dialog and battle messages, or adding in special elements (such as a modified time limit, changing mook soldiers from the allied/enemy/third-party sides, sound effects, or a multitude of abilities). If you want to take one of the easiest stages, give the enemies more aggressive AI, replace the enemy soldiers with a squad of tigers, and make all attacks sound like a squeaky rubber hammer, you’re allowed to do all of that. You can even share your serious or wacky re-dos online for other players to download. 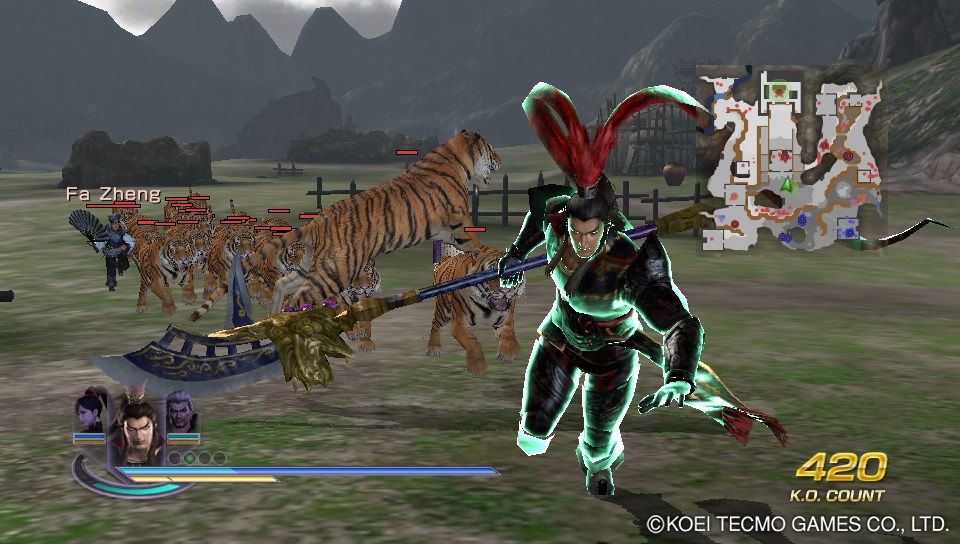 There’s also the Gauntlet Mode, which lets you make a team of five characters to fight simultaneously. Rather than toggle on and off having your partners fighting alongside you in the main mode, Gauntlet Mode has your five fighters out at all times, though you are still allowed to switch playable characters. Formations are also a feature here, granting specific abilities based on which characters you use and what formation you are in. These large stages can be very challenging at times, so it’s recommended to have some well-leveled warriors at your disposal before beginning the mode. In addition to all of this, Warriors Orochi 3 Ultmate takes the story for a bit more material than in the original release. While the original game only had 4 chapters, Ultimate adds several new ones that take place both before the game starts and after one of the endings. To those who have Warriors Orochi 3 on the PlayStation 3 and have beaten the game, but would like to jump into the new content easier, the game allows you to import your PS3 save data of the first release so you can dive into the new stuff. Also for an added bonus, all three Sony versions of Ultimate support Cross Save and Cross Play functionality, which is a nice touch.

Warriors Orochi 3 Ultimate runs mostly well on the Vita, but even with the visual downgrade to keep it running it’s not perfect. There are times when some textures will flicker a pretty significant amount, when this happens it’s usually the floor. At times the game can’t seem to make up its mind on whether to give proper texture to the water or no texture at all, and just looking like a blue mass as a result. Sometimes when a lot of action is going on screen at once, the Vita simply can’t keep up with it all, and the game slows down pretty hard. From personal experience it doesn’t happen too much in the main story, but it can be common in Gauntlet Mode due to the sheer amount of characters that can be on screen at one time. 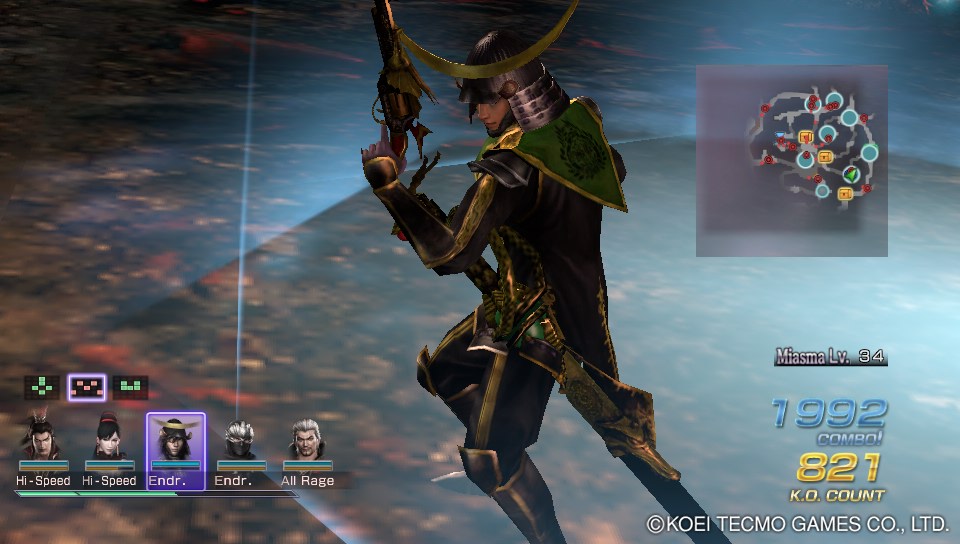 Warriors Orochi 3 Ultimate is a fun game that has a large amount of content, which should keep players coming back for more. Fans of the series will definitely find things to enjoy with this installment, between the abundance of characters from the two crossover series’ and other guest games, to the multitude of game modes, and even the expanded story mode. A few technical issues aside, Ultimate proves to have a solid home on the PlayStation Vita as well. Returning Musou fans and curious newcomers both have a good place to work with in Ultimate, between carrying over old data for the returning players and offering all of the base game content for those who missed it the first time around. This game is one to be pursued.