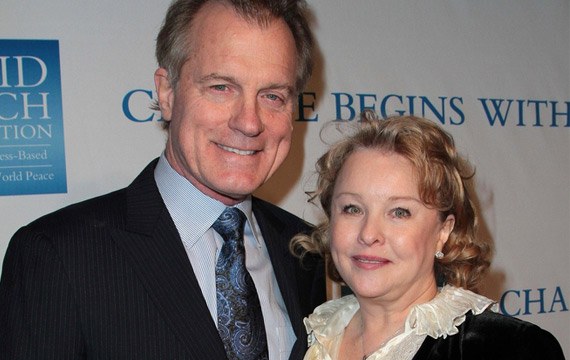 Faye Grant has distanced herself from the leak of an incriminating audio recording which allegedly features her estranged husband Stephen Collins confessing to molesting three young girls over a decade ago.

The former 7th Heaven actor was allegedly caught making the comments during a therapy session with Grant back in 2012. She reportedly recorded the conversation without Collins’ knowledge and handed it over to Los Angeles Police Department (LAPD) officials to investigate.

However, cops closed the case shortly afterwards because there was “no verified victim”.

The audio footage went public on Tuesday, when editors at TMZ.com published the recording and reported on the allegations, but Grant, who is in the midst of divorcing Collins, insists she had nothing to do with the leak.

In a statement released to Eonline.com, she writes, “I woke up today to learn that an extremely private recording I handed over to the authorities in 2012, per their request in connection with a criminal investigation, was recently disseminated to the press.

“I had no involvement whatsoever with the release of the tape to the media.”

Collins is currently under investigation by New York authorities after they received a complaint from a local woman about the 67 year old’s alleged conduct when she was a child.

Meanwhile, LAPD detectives have confirmed they are “revisiting” their 2012 investigations in light of the new accusations to determine if they “missed anything” two years ago, reports TMZ.

Collins has yet to comment about the claims, but the scandal has already cost him a small role in the Ted sequel, and he has also reportedly resigned from the National Board of the Screen Actors Guild, and been removed from the website for the Committee For Stress-Free Schools, where he serves as co-director.

Executives at UP TV in the U.S. have also pulled 7th Heaven from its programming schedule in light of media reports surrounding Collins.

UP’s CEO Charley Humbard says, “As a top family-friendly network, we are deeply concerned for the families that are potentially affected by these disturbing allegations surrounding actor Stephen Collins… 7th Heaven has been a beloved family show and a fan-favourite on our network. We have made the decision to remove the series from our schedule effective today. We will continue to monitor the situation and listen carefully to our viewers.”