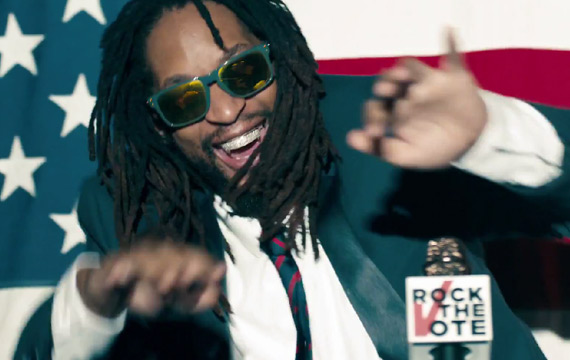 A host of celebrities including Whoopi Goldberg and Lena Dunham are starring in a rap video for the Rock the Vote initiative to encourage youngsters to take part in the 2014 U.S. election.

Goldberg, Dunham and Sophia Bush feature on a remix of Lil Jon’s hit “Turn Down For What” to discuss their dream reforms for America.

The song title is changed to “Turn Out For What” and begins with a comedy skit between Lil Jon and Dunham.

In the clip, the Girls creator states that she is voting for reproductive rights, One Tree Hill star Bush is ‘turning out’ for women’s issues, and Orange is the New Black actress Natasha Lyonne calls for prison reform.

Audrey Gelman, a spokesperson for Rock the Vote, tells Buzzfeed.com, “We hope that the video will connect the dots between caring about an issue and turning out to make a difference – even in a year where the president isn’t on the ballot.”

Other stars in the video include Ireland Baldwin, Fred Armisen, Darren Criss and Tracy Anderson.

Jessica Chastain Calls Out Hollywood for Lack of Films About Women